The word “vision,” (chozeh), appears in one of the most important verses upon which Kabbalistic symbolism and structure is based: “From my own flesh I envision, (echezeh), G-d.” When man, created in the image of G-d, contemplates his own flesh or soul, he comes to comprehend G-d, the Creator of flesh. This verse serves as the basis for employing the metaphor of the physical body in relationship to the sefirot, the Divine radiances or powers upon which all reality is constructed. The model of the sefirot is used in Kabbalah to describe and explain the external process of creation and the physical and spiritual structure of all existence.Chassidut reveals the more inner motivational force which inspires each sefirah, especially in the realm of human experience and its effect on the soul. A person meditates on the attributes of his own soul and as a result becomes conscious of G-d.

In one of the classic Kabbalistic texts, the Tikunei Zohar, the souls of Israel are categorized in ten groups, corresponding to the tensefirot. Each of the sefirot has a soul prototype relating to its essence:

Spiritual vision is associated with the sefirah of hod. This is particularly important in that the appellation “Jew” (Yehudi), comes from the name of the tribe of Judah (Yehudah), whose word-root is hod. Hod represents a number of attributes in the soul–“praise” and “thanksgiving” (hodaya), “acknowledgment” (hoda’ah), “confession” (vidui) and “glory”(hod)–all having the word hod as their root. The common characteristic to them all is the consciousness of surrendering to a higher Divine power in the world and the soul. This property is similar to that of selflessness and making oneself “small”: “for you were the fewest of peoples, ” as discussed above.

According to Kabbalah, the companion sefirot of netzach and hod correspond to both the kidneys and the legs. The kidneys are referred to in the Talmud as the “kidneys of council,” and like the image of legs, relate to a deep inner intuition in the soul driving it forward to accomplish its mission. It is this internal power of soul that allows a Jew, even in the hardest of times, to cling to a vision of redemption. 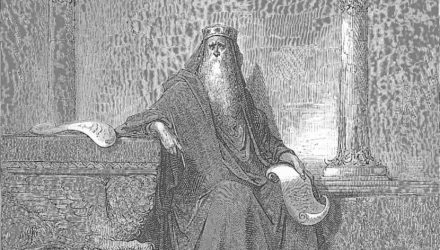 How do we picture the perfect leader? In the important Kabbalistic book, Tikunei Zohar, it is written that the Nation of Israel was called ten different names:

One of the basic foundations of Chassidut is to be connected