Tetzaveh: Sunday: Where is Moses?

This alludes to the passing of Moses on the seventh of Adar, which usually falls out during the week that we read the Torah portion of Tetzaveh. In truth, the soul of Moses returns in every generation. Each time, he has a different name: One time he is Rabbi Shimon Bar Yochai and another time he is a different tzaddik. Since his passing, he does not have a permanent name.

On a deeper level, every person has a name. This is the way he is revealed to others (this is how others identify and call him), like the light that emanates from him. The essence of the soul, however, is above the name. In our Torah portion, G-d calls Moses, “You” and elevates him to the highest source of the soul – before a person is called by name. Not only does Moses ascend by himself, but with him, he elevates the entire Nation of Israel. This is alluded to in the beginning of this Torah portion: “And they shall take to you pure olive oil”. The pure olive oil represents the essence of the Children of Israel, which comes to Moses and ascends together with him.

It is written in the Zohar that Moses’ name is not mentioned in this Torah portion in order to fulfill what he said to G-d after the Sin of the Golden Calf, “Erase me from Your book (sefer)”.(Sefer/”book” is the numerical value of shem/”name”). The rectification is already concealed within this punishment, as in the source of the souls of Israel there is no sin.

By way of allusion : We may think that “m’cheini nah””/please erase me” is a punishment likeGehinnom/Hell, for they both share the same numerical value. But the truth is that all is for the best, as “m’cheini nah”/”please erase me” equals “gam zu l’tovah/”This is also for the best” (= ט (tet) times ו (vav) times ב (beit) “tov”/”good” in the numerical method known as haka’at otiot).

Tetzaveh: Monday: The Heart of Aaron

The names of the tribes are engraved on the stones of the Breastplate on the heart of Aaron the Kohen. They all join together to create a complete picture, but each tribe has the stone unique to it, with its special color and unique intrinsic benefits. Kabbalah explains that there are twelve senses that correspond to the twelve tribes (which also correspond to the twelve months of the year). Each tribe has its own, unique sense, where he finds grace (chen). The word for breastplate, choshen, is actually an abbreviation for chush chen, “a sense of grace”.

A tzaddik like Aaron the Kohen senses the unique sense of each person. In his heart, he is sensitive the subtle changes taking place in each tribe and every soul. He is full of love and concern for all. He “loves peace/completeness and pursues peace/completeness”. It is written that Aaron merited the breastplate on his heart because he was glad in his heart when his younger brother, Moses, was appointed to be leader.

What does the “Breastplate of Judgement” mean? Rashi says that it “atones for the corruption of justice”. Aaron’s heart infuses everyone with love for each other, until they all wholeheartedly forgive each other if they have unjustly acquired something. In this way, everything is atoned.

Aaron is all heart. His name, אהרן equals eight times lev/heart, corresponding to the eight garments of the High Priest. In gematriah, choshen equals Mashiach – the Mashiach senses the entire Nation of Israel in his heart, as is written, “He surely bears our illness”. This is the secret of his leadership.

There is also positive brazenness. It is an assertive will that is not afraid of anything. This will manifests specifically on the forehead as in the Kabbalistic expression, “the forehead of will”. A person’s eyes reflect his wisdom, but the forehead above the eyes express the will, which is above wisdom. This is the secret of the Golden Plate on Aaron’s forehead.

In the merit of the Golden Plate, we defeat Amalek. Thus, in most years, Shabbat Zachor, the Shabbat before Purim during which we read the Torah directive to wipe out Amalek, falls out on the Torah portion of Tetzaveh. Amalek is brazen and impudent. To defeat him, we need holy brazenness. This is alluded to by the numerical value of “And you shall make a plate of pure gold”/ “ועשית ציץ זהב טהור“  which equals “Amalek is the first of the nations (to fight Israel)”/ “ראשית גוים עמלק” .

It is forbidden for the High Priest to allow his thoughts to wander from the Golden Plate when it is on his forehead. From this we learn how much more so it is forbidden to allow one’s thoughts to wander from the tefillin (phylacteries) on his forehead. (The Name of G-d is written once on the Golden Plate, while it is written 42 times in the tefillin).

On an inner level, the Golden Plate is the power of holy da’at (knowledge), concentration and connection, from which we receive the power of da’at to don the tefillin. Amalek turns up when we allow our da’at, our power of connection, to wander from G-d. It is replaced by safek/doubt, which is also the numerical value of Amalek. Rectified da’at defeats Amalek. This is what we will be reading next week in the Scroll of Esther: “The Jews had light and  joy and exuberant joy and dearness” and our Sages explain, “Dearness is tefillin”. In the merit of the tefillin we defeat Amalek.

Tetzaveh: Wednesday: The Crown of a Good Name

There is Divine light that we can feel in our midst. This is G-d’s Immanent Light. But the Holy Temple is illuminated by G-d’s Transcendent Light, an encompassing, Divine light too great for us to integrate. Instead, it is like a crown on our heads, “a golden, encompassing wreath”. The wreath (zer)  is encompassing light, while the nezer is even more than that. It is נ-זר /50 times zer (wreath), corresponding to the encompassing Fifty Gates of Understanding.

And now for a beautiful allusion: We have discussed three wreaths (zer) and a tiara (nezer). Zer zer zer nezer = Mashiach when it is written out in full, mem, shin, nun, chet מם שין נון חית.

The garments seem to be completely exterior. Nevertheless, they turn the Priest into something completely different. The soul experience of the High Priest is that he has nothing of his own, and all of his holiness stems from the garments that were placed upon him. When the High Priest is infused with this consciousness, he has the character trait of temimut, simplicity, which empowers him to perform his service in the Temple with no trace of aspirations for personal greatness.

Aaron, the High Priest (all the subsequent High Priests are a continuation of him) is the figure associated with the character trait of Hod (Acknowledgement). Simplicity is the inner dimension of Hod. 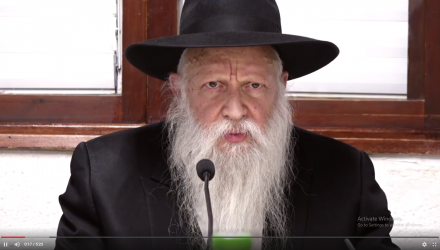 A Helpmate Opposite Him: A Jewish View of Gen...

Rabbi Ginsburgh describes the meaning of the verse about the creation of woman in the context of how Judaism views gender equality.

Moses from Generation to Ge...

In this fascinating lecture, Rabbi Ginsburgh describes a full

Rebbe Baruch of Garelizt was

The Maggid of Mezeritch: Self-...