Lech Lecha: What It Means to be a “Hebrew”

Before we were called either the Children of Israel, or Jews, we were called Hebrews. When Joseph is questioned in Egypt as to his origins he says: “I was stolen from the Land of the Hebrews.” Our language is also called Hebrew, not Jewish or Israeli. Today we will look at the origin of this word, “Hebrew.”

The verse that we have been looking at all week begins with the words: “Abraham crossed through the land….”1 The Hebrew word for “crossed through” is ויעבר , which stems from the three-letter root עבר (pronounced: avar) the root of the word עברי , “a Hebrew.”2 As we progress in our study today, we will begin to appreciate why entering the Land of Israel requires one to be a Hebrew.

Later in the parshah we find that Abraham is indeed called “Abram the Hebrew”3 אברם העברי . The sages4 provide a number of different explanations for this adjective:

“Avram the Hebrew was told.” Rabbi Yehudah, Rabbi Nechemyah, and the sages [disagree]. Rabbi Yehudah says: the entire world is on one side and he is on the other side [the word for “side” in Hebrew is מעבר , which stems from the same root עבר ]. Rabbi Nechemyah says: Because he is of the descendants of Ever [the son of Shem, the son of Noah]. The sages say: he is from the other side of the river and that he speaks in the Hebrew tongue.

There are three opinions and four explanations in this Midrash. Let us look at them more closely and see how they correspond to the four letters of God’s essential Name, Havayah.

The second explanation offered by the sages is that Abraham speaks the language of the Hebrews. Speech is always described as the manifestation of the sefirah of kingdom, which is many times called “the world of speech” in Kabbalah. Thus, this explanation corresponds to the sefirah of kingdom and to the final hei of Havayah. Thus, we have that both of the sages’ explanations are related to language and to the two hei’s in Havayah, which in Kabbalah are also described as the mother and the daughter, as the prophet says: “Like the mother is the daughter.”8

Rabbi Nechemya’s explanation corresponds to the sefirah of wisdom. Ever, Abraham’s teacher was the 14th generation of men. Abraham was the 20th generation. One connection between these two numbers is that 14 is written יד , and 20 can be written as יוד , both of which correspond to the filling of the letter yud,9 the first of the four letters of the Tetragrammaton, which corresponds with wisdom. 14 and 20 are related in another way: 14 = 105, while the 20 = 210, thus there ratio is 1:2, a ratio that is known in Kabbalah as “the whole to the half” (שלם וחצי ). Thus, the ratio between (the triangles of the generations of) Abraham and Ever is one of “the whole [Abraham] to the half [Ever].” If we add Abraham and Ever we get: אברהם ┴ עבר = 520, which is also the product of יוד and י־הוה , God’s essential Name. The multiplication of the filling of the letter yud (יוד ), the first letter that corresponds to wisdom, by the entire Name stresses the wisdom aspect of God’s Name. Finally, the name Ever itself in Hebrew is cognate to the word for “past” (עַבַר , pronounced: avar). To be a descendant of Ever is to be a descendant of the (distant) past. So there is an inherent time dimension in it. Just as space is related to the sefirah of understanding time (especially, the distant past) corresponds to the sefirah of wisdom.10

Rabbi Yehudah’s explanation corresponds to the six extremities that are the six dimensions ofZe’er Anpin (from loving-kindness to foundation), also known as the six extremities. He explains that Abraham was on one extreme (one side) and the rest of the world was on the other extreme (or side). Rabbi Yehudah’s explanation pits Abraham’s steadfast faith in the Almighty (which we discussed in yesterday’s installment) with the rest of humanity’s superstitious beliefs in false gods. Faith is the innermost experience associated with thesefirah of crown, and the inherent link between Ze’er Anpin—the six dimensions—and faith is described by the Zohar as “Ze’er Anpin is unified and linked with Atika (the innermost aspect of the crown).” Thus, Abraham’s ability to stand with confidence in his faith is fueled by his insistence on remaining separate from all other people. Furthermore, Rabbi Yerhudah’s explanation adds a dimension of consciousness to the etymology of Abram the Hebrew. According to him, what situated Abraham differently than all other men in his generation was his consciousness of God. In Kabblaah, consciousness is associated with the sefirah of knowledge, which is regarded as the key to the six extremities of Ze’er Anpin.

Before summarizing, let us note that we now see that the 3 categories of explanation offered by Rabbi Nechemyah, Rabbi Yehudah, and the sages correspond to one of the central models of Sefer Yetzirah: world (space), year (time), and psyche (consciousness).

Now that we have seen all four of the explanations, we can say that the words “Abraham crossed through the land,” contain them all, revealing the multifaceted nature of the Torah’s verses. It was Abraham’s ability to embody all of these explanations, which made him into an individual uniquely different from his surroundings that assisted him in crossing the land and being a Hebrew. He was then capable of opening his home to any passerby, assured as he was of his independence as a Hebrew.

So far we have translated the beginning of this verse as: “Abram crossed through the land.” Let us now look at the original Hebrew words: ויעבר אברם בארץ . The first word ויעבר , “He crossed through” or “He passed through” is equal to 288, the number of sparks of holiness that fell into the mundane reality following the shattering of the vessels of the world of Chaos, the world of Nekudim. 288 is also the numerical value of אברם (243) and לוט , “Lot” (45), Abraham’s nephew, together. Altogether there are in this verse 45, or מה letters. 45 is the numerical value of the filling of God’s essential Name, Havayah, which is connected to the rectification and elevation of the 288 Divine sparks.

Permuting the letters of the word ויעבר we get עיבור ,11 meaning “pregnancy,” alluding to the first of the Arizal’s three stage process of development: pregnancy, suckling [dependency], mind [maturity] (or, in Hebrew, עיבור יניקה מוחין ). This word also permutes to spell עב ריו .עב is the gematria of חסד , loving-kindness. ריו is the gematria of גבורה , might. Thus this word alludes to the unification of loving-kindness and might, which is why, according to the Arizal that it is the first word in the Torah’s recounting of the 13 Principles of God’s Mercy, as mercy is the inner experience of the sefirah of beauty. The connection between “pregnancy” and the unification between loving-kindness and might is explained in length in Kabbalah.12

But, practically speaking, what this reveals to us is that every person who ascends to live in the Land of Israel (“makes aliyah,” in modern parlance) must pass through a second pregnancy. This is like a second period in the womb that gives birth to a new spiritual reality in the person’s life, just as the first 9 months in the womb gave birth to a first spiritual reality. In Chassidut, it is explained that whereas the first period of pregnancy, of being in the womb, allows one to understand that the spiritual aspect of reality indeed exists, the person can only achieve, at best, an intellectual understanding of the spiritual. The second level of spirituality allows a person to begin to see the essence of the spiritual world. This is a much higher level, and again is possible only after experiencing a second “pregnancy” as it were, this time with the Land of Israel, the essence of mother earth, as one’s womb.13 Once attaining spiritual sight, a person can successfully engage in the elevation of the sparks of holiness in the mundane, as did Abraham.

Now, in the entire Torah, the word ויעבר appears 7 times, with different vowel signs, indicating different tenses of the verb. Five times it appears as it does here, with the meaning of “he crossed through,”14 and another twice with the meaning of “he passed [objects or people] over.” Thus, we have that 7 is divided into 5 and 2, a division alluded to in the word “gold,” זהב , where the first letter ז = 7, and the next two letters, ה and ב equal 5 and 2.

Ours is the first time that this word in the sense of “he crossed through” (and all its secrets discussed above regarding the 288 sparks of holiness) appears in the Torah. The last time that this word appears in the Torah (also in this sense) is just before the 13 Principles of Mercy, where the verse is “God passed over him [Moshe] and He called out” ויעבר יהוה על פניו ויקרא . If we add the numerical value of the three words in our verse: ויעבר אברם בארץ(“Abram passed through the land”) and the value of the words in the final verse: ויעבר י־הוה על פניו ויקרא (“God passed over him and He called out”), we get 1701, which amazingly is equal to 7 times Abram, 7 · אברם , Abraham’s name as it appears in the verse from ourparshah. 1701 is also the value of אהיה · אנכי , God’s Name Ekyeh, times His connotation “I,” indicating how much this word is related to the essence of Godliness and the ability to see spiritual matters.

5. The river always associated with the Promised Land (to Abraham, in this week’s parshah) is the Euphrates, the last (but most essential) of the four primordial rivers of Genesis. In Hebrew, the root of “river” (נהר ) is one of the 13 synonyms for “light.” It is also the root of the Aramaic translation of “light” in the beginning of creation. “And God saw the light to be good.” Numerically, both the word for “river” (נהר = 255) and “Euphrates” (פרת = 680) are multiples of “good” טוב (= 17).

9. See also https://www.inner.org/parshah/deuteronomy/E68-0105.pdf for more examples of how these two fillings work together.

10. We have gone into these definitions in greater detail in our latest book: Lectures on Modern Physics: Relativity, Quantum Mechanics, and String Theory, the first volume in our new series: Lectures in Kabbalah.

13. In Kabbalistic language (and in Rebbe Nachman’s writings) this is referred to as first maturity and second maturity (גדלות ראשון, גדלות שני ).

14. With vowel signs: וַיַּעֲבֹר , which in Hebrew grammar is the tense known as binyan kal. 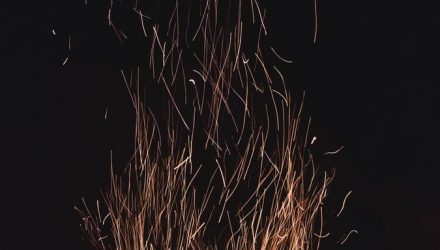 How to Elevate Sparks in Three Steps

Loving-kindness bridges the gap between Abraham’s penchant for truth

Lech Lecha: Fitting In As A...

The following verse appears in the first portion of parshat Lech Lecha:1

This lesson was given by