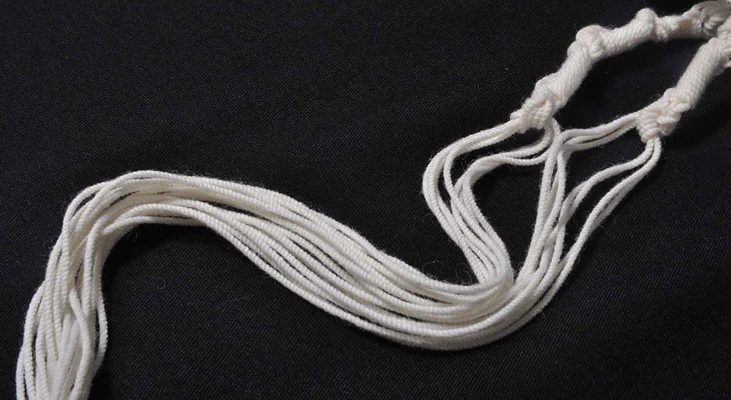 One of the 613 commandments is to tie a tzitzit on each of the corners of a four-cornered garment.

The commandment of tzitzit appears in the Pentateuch in the following verses:1

God said to Moshe: “Speak to the Children of Israel and say to them [that] they shall make tzitzit (צִיצִת ) on the corners of their garments, throughout their generations; and in the tzitzit (צִיצִת ) on the corner, they shall place a blue fiber. They will be your tzitzit (לְצִיצִת ); you will look at it and you will remember all of God’s commandments and you will do them; and, you shall not follow your hearts and eyes, after which you prostitute. So that you may remember and perform all my commandments; and you will be consecrated to your God. I am Havayah, your God, who brought you out of the land of Egypt to be your God. I am Havayah, your God.”

Note that in this paragraph, the Torah mentions the word tzitzit explicitly three times, whereas using a pronoun to refer to it would have been just as suitable (indeed, pronouns are used in some cases in this paragraph). It would be appropriate therefore to see how the three explicit instances of tzitzit in the parshah correspond to some Kabbalistic models.

The simplest and most straightforward model to which these three instances of tzitzitcorrespond is from the Book of Formation, and is known as the space-time-soul model.

In this case, the correspondence is easy to see:

The 1st instance, “…make tzitzit on the corners of their garments, throughout their generations…” corresponds to time (generations).

The 2nd instance, “…in the tzitzit on the corner, they shall place a blue fiber” correspond to space (to place a blue fiber on the corner). The sages explain that the blue fiber, known as the techelet triggers a cascade of images related to both physical and spiritual space, “the techelet is similar to the sea, the sea is similar to the firmament, and the firmament is similar to the Supernal Throne.” The Supernal Throne in Kabbalah is a connotation for the World of Creation. In Hebrew, the word “world” (עוֹלָם ) stems from the word meaning “concealed” (נֶעֶלָם ), alluding to the fact that the Creator is concealed (impalpable) in the Worlds. Of the four worlds usually discussed (Emanation, Creation, Formation, and Action), the description of World is explicitly related to the World of Creation, the first level of consciousness where the ego shrouds God’s presence.

And the 3rd instance, “…they will be your tzitzit; you will look at it and you will remember all of God’s commandments” corresponds to soul (to look and to remember).

From Action to Emanation

The three explicit mentions of the tzitzit in these verses also suggest a progression through the Worlds, beginning with Action and ending in Emanation. This can be seen by focusing on the verbs accompanying each of the instances.

Immediately following the third instance of “tzitzit,” we read the phrase, “And you shall see it” where the “it,” literally refers to the tzitzit. However, this pronoun “it” (אֹתוֹ ) in Hebrew also means “him,” thus alluding to “Him,” i.e., to the Almighty as He is revealed in the World of Emanation where our sense of self does not obscure His Presence. Moreover, of the five senses, sight corresponds to the World of Emanation. The grammatical proximity between the 3rd instance of tzitzit and this phrase (“And you shall see it [Him]”) illustrates how the supernal father and mother figures (which correspond to the Worlds of Emanation and Creation) are always connected and never part.

The sum of the numerical values, the gematriot, of the three explicit instances of tzitzit(צִיצִת צִיצִת לְצִיצִת ) is 1800. But, 1800 is also the value of just the 3rd instance with the phrase following it, which we have seen as corresponding to the two companion Worlds of Creation and Emanation (וְהָיָה לָכֶם לְצִיצִת וּרְאִיתֶם אֹתוֹ )! So the progression through the three lower levels (the World of Action, Formation, and Emanation) is included within the unification of the two highest levels, the Worlds of Creation and Emanation.

Moshe Rabbeinu and the Tzitzit

Probably the best known gematria about the tzitzit is that it is related to the number 613. How so? The gematria of tzitzit (צִיצִית ) when written in its full form is 600 (see the next section for more on this). If we add to this the 5 double knots and the 8 strings found in each tassel, we get 613.6 This relationship provides a numerical depiction of how looking at the tzitzit reminds one of God’s 613 commandments.

Indeed, 613 is the value of “Moshe Rabbeinu” (מֹשֶׁה רַבֵּינוּ ), providing an additional level of contemplation of how the tzitzit connects us with the Torah given by Moshe Rabbeinu. Indeed, Moshe Rabbeinu is described (consummately) as “God’s servant”7 (עֶבֶד י־הוה ). And, as above, the filling of the three instances of tzitzit equals the product of God (Havayah) and servant! Thus, contemplating the tzitzit and kissing it each time we mention it in the morning Shema leads us to become one with Moshe Rabbeinu, the consummate servant of God, who is essentially one with the 613 commandments of the Torah.

More on the Tzitzit and 613

We noted above that the gematria of tzitzit (צִיצִית ) when written in its full form is 600. But, as we have seen, in all three instances the word tzitzit is spelled with only one yudnot two, like so: צִיצִת .

Still, there is a simple numerical equivalency here that needs to be highlighted. The gematria of the three instances of tzitzit as it is written in the Torah (צִיצִת צִיצִת לְצִיצִת ) is 1800, exactly the value of three times the full form (צִיצִית ), which is equal to 600, and 3 ∙ 600 = 1800! Thus, the teaching about tzitzit and 613 is based on the average value of the three instances.

In fact, this idea is apparent in the form of the three instances. We noted that in the third instance an additional relational lamed (ל ), meaning “for,” is added to the word. If we divide 30, the value of this additional lamed, in three, we get 10, or three letters yud (י ) whose value is 10. When we add a yud to each of the three appearances of tzitzit, then each will now be the full form of the word.

Let us go another step deeper. The final form of the letter mem (ם ) is equal to 600. Thus, three full forms of tzitzit (צִיצִית ) equal three final mems. The sages refer to the final mem as the concealed mem (mem stumah), the letter of Mashiach. In addition, according to many great tzadikim, the Mashiach’s special mitzvah—the one through which he shines the most and his concealed essence becomes revealed—is the mitzvah of tzitzit.
One explanation for this is that the two-letter root of tzitzit is simply two letters tzadik(צצ ), symbolizing the two levels of tzadik present in every Divine soul. These tow levels are called the higher tzadik, the giver, and the lower tzadik, the receiver, as explained in Chassidic writings.8 When both levels are revealed and unified, they release the Messianic potential of the soul.

The gematria of each letter tzadik (צ ) is 90, or one twentieth of 1800. 90 is also the value of three letters lamed (ללל ). In the three explicit instances of tzitzit there are 6tzadiks, which, when inter-included each in each, total 36, corresponding to the 36tzadikim of every generation, which represent the potential of the generation to merit the coming of Mashiach.

4. There are two possible fillings for צ , either צדי or צדיק . Note that here, it is filled as צדי.

5. If we add to the three instances of tzitzit the filling of the pronoun “it” (אֹתֹו ), which we saw corresponds to yet a fourth level, אלף תו ואו , the total will come to 2506, or 7 timesMashiach (מָשִׁיחַ ).

8. In the Torah, the archetypal figures of the higher and lower tzadik are Joseph and Benjamin.

(Excerpted from Rabbi Ginsburgh’s book, The Rectification of the

The Transformative Power of...

Until the advent of the

Many people have been asking

The sages say that a

The Maggid of Mezritch: Lost S...