The Music of Redemption

The Great Song of the Torah

The Torah portion of Ha'azinu is the song of Moses at the conclusion of his mission on earth. It is one of the two great songs of the Torah, and relates all the history of the Jewish People, past, present and future. Nachmanides writes that every Jewish soul can find his entire biography concealed in the letters of this song. The Magid of Mezritch, the disciple and successor of the Ba'al Shem Tov, taught that it is important to learn this song by heart, as one's whole life unfolds within it. Ha'azinu is one great song to God, just as one's life is a song to Him.

One of the most potent images in the song of Ha'azinu is the image of the eagle hovering over his nest of fledglings (Deuteronomy 32:11). In this metaphor, God, the eagle, comes to waken the fledglings in his nest, hovers over them, spreads his wings over them and finally lifts them on his wings in redemptive flight through the sky. There are two synonyms for "wings" in this verse: kanaf, whose numerical value is 150, and evrah, whose numerical value is 208. Together, these two words equal 358, the numerical value of Mashiach. The eagle carrying the Jewish People on his wings is the Mashiach, carrying out his Divine Messianic mission. In the Torah portion of Yitro (Exodus 19:4) God also refers to the redemption from Egypt as redemption "on the wings of eagles." Clearly, the eagle and his wings have messianic implications.

Before the eagle takes his fledglings on his wings, he must awaken them. The eagle is a massive and powerful bird. If he lands on his nest suddenly, he is liable to crush his fragile fledglings. Thus, our verse illustrates the eagle as hovering over his nest, expressing himself to his fledglings as the most gentle of creatures, manifesting perfect balance and stability. The verb for "hover" rachef, is very rare in the Torah. One of its only other appearances is in the second verse of Genesis, "and the spirit of God hovered over the waters." Our sages explain that this is the spirit of Mashiach. The waters are the waters of teshuvah, the awakening of the consciousness of the soul to return to God. These two expressions of "hovering" are completely complementary. Both point to the awakening of the Jewish People to the Messianic reality of return to God.

Touching and Not Touching

In Kabbalah and Chassidut the hovering of the eagle is referred to as "touching and not touching." The eagle is able to simultaneously touch and not touch, allowing his fledglings to awaken little by little, in accordance with their ability to grasp his presence. The power to touch is the power to be involved – to inspire the other. Not touching allows the other free choice so that his soul can awaken by itself in its desire to ascend toward God. The eagle — Mashiach — inspires us while simultaneously and paradoxically allowing us to slowly integrate the new Messianic reality at our own, individual pace.

The Hebrew for "touching and not touching" is noge'a v'eino noge'a. The initials of this phrase spell nun, alluding to the Fiftieth Gate of Understanding to which Moses aspired, and received only at the very end of his life. One of the secrets of the Fiftieth Gate is the secret of touching and not touching — the essential sense that God is totally involved in reality while simultaneously allowing us to choose of our own free will.

The Song of the Wings of the Eagle

The Hebrew word for "eagle" is nesher; nun, shin, reish. The final two letters of nesher spell shar, which means "song." More than any other word in the song of Ha'azinu, the word shar is the essential syllable of nesher. There are two types of song: verbal song (including poetry) and melody. In Hebrew, "song," which includes poetry, is called shir, as represented by the Hebrew letters shin and reish of nesher. The Hebrew word for "melody" is nigun, which begins with a nun, the first letter of nesher. Thus, nesher is an acronym for the two types of song. Our sages teach that when the eagle approaches his nest he beats his wings to create a song, gently preparing his fledglings for his arrival. To arouse the souls of the Jewish People and the entire world, each person with his own spark of Mashiach must possess the power of poetry and melody inherent in the eagle.

Our verse describes the eagle as arousing (the fledglings in) his nest. Our sages teach that the Mashiach sits in a nest in the Garden of Eden, waiting to redeem the world. The Hebrew word for "nest" is ken, which is cognate to tikun — "rectification," and also kinyan — possession. The most perfected possession is the new Torah of Mashiach, the song of the wings of the eagle, which begins to resonate as he approaches his fledglings. This new Messianic Torah will bring about our rectification as the eagle approaches his nest to gently — touching and not touching — arouse his waiting fledglings.

All for the Best

The word for "fledglings" in our verse is gozalav, whose root is gimel, lamed, zayin. These letters are an acronym for a very basic phrase "Gam zu letovah," which means: "This too is for the best." The fledgling waiting to be lifted onto Messianic wings must be awakened to the consciousness that whatever happens to us is for the best, and will ultimately lead to the true and complete redemption. 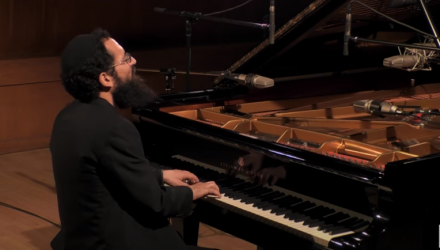 A Melody with a Story