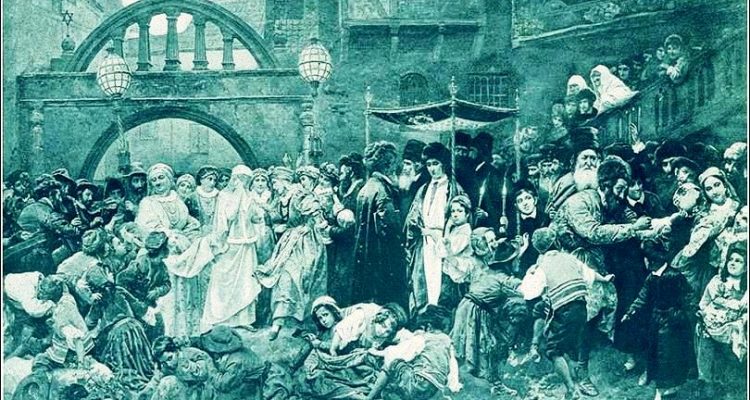 Ba’al Shem Tov: The Wedding Presents that Descended to Reality

A Jewish innkeeper had two young orphans, a boy and a girl, work for him in his inn. When they came of age, he thought it would be good for them to marry. They agreed to marry but needed money to set up their household. The innkeeper was a good person, and he gave them the money that they needed.

The couple journeyed from the village to the nearby city to make their purchases. When they reached the city, they heard a commotion. They were told that there was a Jewish family that did not pay their rent to the local nobleman and that they were to be thrown into the pit, where they would slowly starve to death.

The future bride and groom felt great compassion for the family and gave them all their money, which was approximately the sum that the family owed the nobleman and freed them. They then returned to the innkeeper and told him that robbers had robbed them of all their money. The innkeeper gave them another sum of money, the wedding date was set, and the local Jews were invited to the celebration.

About an hour before the ceremony began, a wagon suddenly pulled up, and a group of Torah scholars with radiant faces disembarked. They were the Ba’al Shem Tov and his disciples.

When they arrived, the Ba’al Shem Tov said to the groom: “I am your uncle. I heard that your wedding is today, so I came to participate.” Then one of the disciples said, “I am the uncle of the bride.” Another disciple said, “I am the groom’s cousin.” And so all the disciples presented themselves as relatives of the couple, who had come to participate in their joy. And joyous it was.

When the master of ceremonies announced the gifts that the guests had brought, as was accepted practice in those days, he asked the Ba’al Shem Tov what gift he had brought. The Ba’al Shem Tov answered: “I am giving them the village that belongs to the nobleman.” Everybody burst out in laughter, thinking that he had nothing to give so he was joking about it to bring joy to the couple.

One of the disciples arose and told the master of ceremonies that he is giving the young couple the nobleman’s mill. Another disciple arose and gave them the river, a third—his forest, and so forth. There was great laughter, and it was a joyous celebration.

Shortly after the wedding, the innkeeper suggested to the young couple that they should open their own inn in one of the villages. The innkeeper promised to help them with initial expenses, and this is what they did.

One night not long afterward, there was knocking on the door of the couple’s home. The groom opened the door, and a non-Jew was standing there: “I am the servant of a wealthy nobleman,” he said. I went hunting with the son of the nobleman and the young master fell with his horse and wagon into a ditch filled with snow. I cannot get him out of there. When I saw the light on in your home, I came to you. Can you help get the nobleman’s son and the horse out of the ditch?”

The groom took a large lantern, shovels and additional tools and they managed to free the nobleman’s son, the horse, and the wagon. The groom brought them to his home, gave him a hot drink, dry clothing, and a warm bed to sleep in.

The next morning, the nobleman’s son and his servant went home to a large commotion. The nobleman was worried and had sent people to search for his son. When he came home, there was a great joy.

The nobleman summoned a doctor who said that the son would have to rest for a number of weeks. When he recuperated completely, the nobleman made a large feast and invited all his friends. He also invited the groom, who had saved his son. The noblemen drank and then began giving gifts to the groom who had saved the nobleman’s son.

The nobleman said that for saving his son, he gifts him the entire village. Between the rest of the guests, who were also very wealthy, and enthusiastically followed their host’s example, the young groom was gifted all that the Ba’al Shem Tov and his disciples had promised on his wedding day.  One guest gave him the river, the other a mill, a third a forest, and so on, and the groom became an extremely wealthy man.

This was the reward for the young couple, who had redeemed the captives with the money for their wedding. With his holy, illuminating eyes, the Ba’al Shem Tov saw all of this from the start and came to pay them their reward.

Tzaddikim have two different methods of working wonders: There is the salvation that comes about immediately and directly, and there are those that cause some rectification in reality and then draw down salvation after some time has passed.

It would seem that these two methods are the ways employed by the prophets, as Nachmanides explains on the verse, “If there appears among you a prophet or a dream-diviner who gives you a sign or a wonder”[1] (כִּי יָקוּם בְּקִרְבְּךָ נָבִיא אוֹ חֹלֵם חֲלוֹם וְנָתַן אֵלֶיךָ אוֹת אוֹ מוֹפֵת):

“A Sign” [denotes a natural phenomenon serving as] a symbol of something similar that will take place afterward, this being associated with the expression, “every man with his own standard.”[2] …The word for “a sign” (אוֹת) comes from the word “approached”[3] (אָתָה) for this will come about in the future.

“A wonder” (מוֹפֵת) on the other hand, applies to something novel which the prophet does before us, making some change in the natural order of the world, similar to what is stated, “to seek the wonder that was performed on Earth”[4] (לִדְרֹשׁ הַמּוֹפֵת אֲשֶׁר הָיָה בָאָרֶץ)

We find both these meanings in the verse, “God said: Just as My servant Isaiah walked naked and barefoot for three years as a sign and a wonder on Egypt and on Kush”[5] (וַיֹּאמֶר הוי' כַּאֲשֶׁר הָלַךְ עַבְדִּי יְשַׁעְיָהוּ עָרוֹם וְיָחֵף שָׁלֹשׁ שָׁנִים אוֹת וּמוֹפֵת עַל מִצְרַיִם וְעַל כּוּשׁ) because in this act of the prophet, there was a sign foretelling what was to come, and a wonder in the practice of the prophet in walking that way.

The essential difference between the first two stages and the last two, is that first there was great joy and as a result, many gifts were given, but they all remained concealed and unrealizable; in effect, the spiritual effluence behind these gifts was being drawn dawn by the Ba’al Shem Tov and his disciples, but the spiritual effluence had not yet materialized. Ultimately, the story repeats itself with compassion and joy, when the gifts are materialized in reality.

This reflects what is explained in Chassidut that every descent of effluence or abundance from heaven does so in two stages referred to as the concealed reality (עָלְמָא דְּאִתְכַּסְּיָא) and the revealed reality (עָלְמָא דְּאִתְגַּלְיָא). Initially, the abundance is concealed. Only afterward is it drawn down and materialized. Tzaddikim—the righteous individuals—work in the concealed reality. There, at the very source of effluence and abundance, they can direct things as they will.[6]

At the wedding of the orphans, the Ba’al Shem Tov and his disciples “acted out” the future reality. Their words were not just an expression of their wishes, but actually affected the upper worlds—words that later materialized into reality.

From the Essence of the World to Come

There are two novel points in this story, and both relate to the way in which we relate to non-Jewish noblemen. The fact that the groom went out to help the nobleman’s son is out of the ordinary. Usually, people of the nobleman’s stature did not need the help of Jews. Perhaps the spirit of Jewish law is not comfortable with this act either – for generally, the noblemen, by “virtue” of their atrocious behavior towards their vassal Jews, are among those who we are not required to assist.

No less out of the ordinary is the feast that the nobleman made in honor of his son’s salvation, where the Jew was the star of the event, and the noblemen’s gifts flowed to him from every direction. In those days, material abundance usually flowed in one direction only—from the Jewish serfs to the wealthy noblemen. This opposite flow was an unusual wonder, literally a “leap” to the reality of the messianic days when “Foreigners will herd your flocks.”[7] This entire unfolding of events was like a good dream in the midst of a dark night.

When we follow the path of the Ba’al Shem Tov, we are privileged to see the actual redemption even while still trapped in the darkness of the exile, described as “and night like day will shine.”[8] When each of us can see a mini-redemption wherever he goes, all those mini-redemptions will join to become the complete redemption.

[6]. This is the order of the letters of God’s essential Name, Havayah. First, the letters yud-hei, which are “the concealed for Havayah our God,” and then the letters vav-hei, which are “and the revealed for us and our children” (Deuteronomy 29:28). The vav in God’s Name Havayah is the conduit of drawing down, which in practice draws down the point of the first yud.

In this manner, we point out that the first compassion in this story was accompanied by the self-sacrifice of the couple, who gave everything that they had to save their fellow Jews. This compassion comes from the source of true nullification of “All of Israel are responsible for each other” (Shavu’ot 39a), with the feeling of how the entire Jewish people are literally one. This level is the level of wisdom in the Divine soul, from which comes the attribute of holy compassion, which in its inner dimension illuminates the reality of every Jew (as explained in Igeret Hakodesh 12). The second compassion on the son of the nobleman was simpler and more natural, coming from the compassion embedded in Israel’s animal soul (as explained in chapter 1 of Tanya). A similar connection also exists between the two expressions of joy in our story. The joy of the marriage comes from the source of joy in the inner dimension of the sefirah of understanding, while the joy of the noblemen (kings) comes from the external dimension of the sefirah of kingdom.

Returning to the four letters of God’s essential Name, their inter-connections are alluded to in the verse, “What is his name and what is the name of his son” (Proverbs 30:4. See Zohar 3:191b and Torah Or 73a), which reveals that there is a connection and essential likeness between the father (the sefirah of wisdom, the point of unified Divinity) and the son (the seven attributes of the heart), and in the verse, “Like the mother is her daughter” (Ezekiel 16:44) describing the connection between the supernal mother (the sefirah of understanding, “the mother of children is happy”) to her daughter (the sefirah of kingdom, the feminine aspect, the revelation of joy in lower reality).