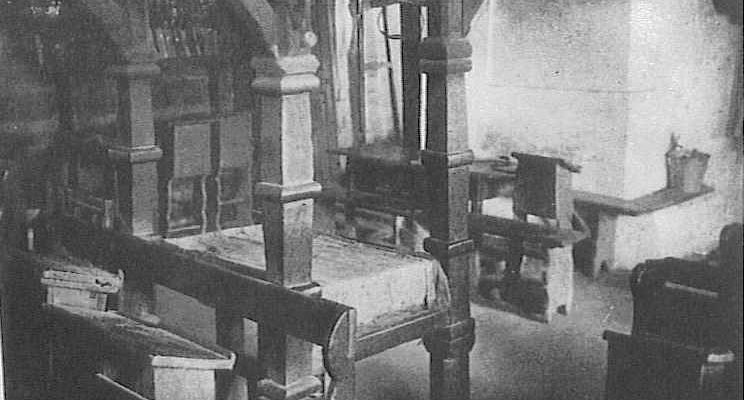 I heard from the rabbi of the holy community of Polna’ah (Polonne), the Ba’al Hatoladot that once the Ba’al Shem Tov was praying in a room with a large vessel of water. Those there saw that the water was moving back and forth. The Shechinah (God’s immanent presence) was literally upon the Ba’al Shem Tov and this caused the earth to tremble, as is written, “Because God descended upon it in fire…and the entire mountain trembled greatly.”

The Heart of Israel

The love and fear that are aroused during prayer are the two wings of the soul.[1] By means of the wings, the prayer ascends on high and stands before God. In the case of the Ba’al Shem Tov, on their way up, his attributes of love and fear also influenced his surroundings. It is interesting to note the exact description in this story: “and this caused the earth to tremble.” The Ba’al Shem Tov’s prayer made its impression all the way through the ground.

We can say that because the Ba’al Shem Tov was lowly in his own eyes, and he felt that his soul was like dust before every Jew, the exaltation of his soul in prayer was able to radiate all his surroundings and to shine upon all those who were in his presence. When the Ba’al Shem Tov would pray, it was not his prayer, alone. He was one with the ground, with the world  – and, the world prayed with him.

Among the many stories about the Ba’al Shem Tov, the stories of his prayer and fear of heaven are special, because they primarily relate to his essence and not only to the miracles that he wrought in various circumstances. He would certainly have preferred that these would be the stories related about him, as it is told:[2]

After the passing of the Ba’al Shem Tov, his disciples were sitting together and were telling stories about the wonders and miracles that he had wrought. His holiness appeared to some of the disciples and said to them, “Why are you talking about miracles? Learn from my fear of heaven!”

In keeping with this directive, let us tell some short stories of the Ba’al Shem Tov’s fear of heaven.

Once on a holiday, and it is not known if it was the first day of Passover or Shemini Atzeret, and if the congregation had to say the prayer for rain or for dew, the Ba’al Shem Tov was leading the prayers with great fervor. For so I have heard a number of times from his disciples, that he would raise the heads of all those present and would call out loudly in his prayer. And the great Rabbi, the Maggid (of Mezritch, the Ba’al Shem Tov’s disciple), could not take the noise, for he was very ill, and he left the Beit Midrash and went into a small house there, where he would pray in solitary.

Before the Mussaf prayer, the Ba’al Shem Tov went to the small house above to put on the kittel (a white garment used for holy occasions). The Maggid said that he could tell when the Shechinah was resting upon him, and when he saw the Ba’al Shem Tov then, he could see that he wasn’t in this world.

When the Ba’al Shem Tov put on the kittel, it bunched-up by his shoulder and the great Maggid took hold of the garment to straighten it out. And when he touched the garment, he began to tremble. He held onto the table and the table also began to tremble with him. And the Ba’al Shem Tov left, and the Maggid continued to tremble until he had to pray and ask God to remove the trembling from him, for he could endure it no longer.[3]

I also heard from Reb David Furkash of Mezhibuzh that once the Ba’al Shem Tov was on a journey and prayed in a certain home, at the eastern wall. There were barrels filled with grain next to the western wall of the home, and they could see that the grain was trembling.[4]

The disciples of the Ba’al Shem Tov related that they saw that the fringes of his prayer shawl would move back and forth with him as if they had their own vitality.

Once the Ba’al Shem Tov was in the state of Wolochia, where there was coagulated wine that was oozing from the grapes. When two or three small drops of this wine would be mixed in a cup, it would be impossible to drink it due to its strength.

All present looked at him and saw that his face turned red and all his hairs stood on end, literally like fire and they were frightened. But the Ba’al Shem Tov passed his hands over his face, and all returned to normal, and this was most wondrous in their eyes.

And the Ba’al Shem Tov said that it is known that, “strong wine is removed with fear.”[5] And when he contemplated God’s greatness, fear and trembling fell upon him and cleared the wine entirely.

The holy Rabbi Ze’ev Kitzes, one of the great disciples of the Ba’al Shem Tov, said that all the praises that were related about the holy Arizal—that he knew the names of birds and palm trees, and that he would speak with spirits and the souls of tzaddikim in the Garden of Eden, and many more praises—were all insignificant in relation to what he himself saw in his master, the Ba’al Shem Tov: His holiness, his separation from worldly matters, his humility, his Torah and fear of Heaven, his love of God, his love of Israel, and all the attributes that the sages enumerated that lead to ruach hakodesh (the holy spirit).

[3] Another related story is told in the book Ma’amar Mordechai 14, and because of the preciousness of the words of Torah with which it is infused, we will bring it here:

Once in the kloiz in Ruzhin, the chassidim sat down to a Melaveh Malkah feast (feast to escort the Shabbat Queen as she takes leave on Saturday night). The holy Rebbe of Ruzhin opened the door to his room, which opened into the synagogue. He stood at the entrance and said, “You should know that the holy Ba’al Shem Tov was not the Kivyachol (his euphemism for God) and my grandfather, the Maggid of Mezritch was not a simple wagon driver.”

The Rebbe of Ruzhin continued: “The holy Ba’al Shem Tov once led the prayers and his prayer shawl slipped out from his belt. My grandfather the Maggid approached him and folded the prayer shawl and re-inserted it into his belt. And the fear of God fell upon the Maggid, and he began to tremble and he was in great danger, so much so, that they were forced to interrupt the Ba’al Shem Tov from his state of cleaving to God in order to quell the Maggid’s fear.

And I have already opened my remarks by telling you that the Ba’al Shem Tov was not the Kivyachol and my grandfather the Maggid was not a simple wagon driver. Nonetheless, when he touched the Ba’al Shem Tov’s garment, he was stricken with such great fear. And now, please contemplate on this: The entire world is the garment of the Holy Blessed One, as it were, for His holiness clads all the creations of the world. If so, how much fear of God should fall upon a person when he touches something in the world.”

Image: The interior of the Ba'al Shem Tov's shul in Medzhibuzh.