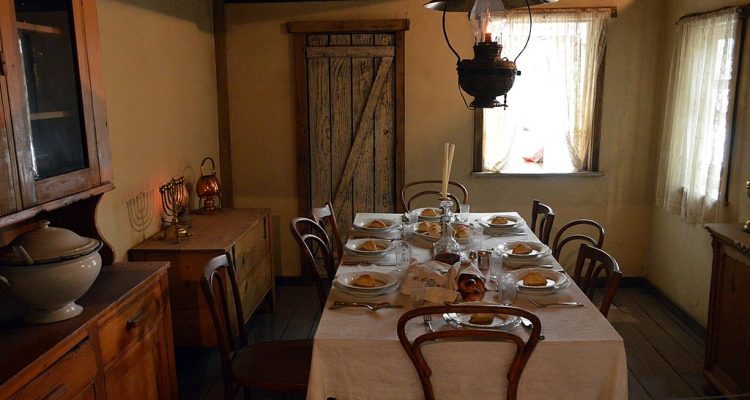 The Ba’al Shem Tov: Manifestation of Shechinah in Simplicity

The holy Rebbe Rayatz once said: I will tell you a story about the holy Ba’al Shem Tov, about one of the three times that he showed his disciples—and they saw with their own eyes—what was happening in a place far away, similar to what we found regarding Elisha the Prophet.

This man and his wife did not have any children. He and his wife sat down to the Pesach Seder after all the hard work that they had done to prepare for the festival. After the wife asked the Four Questions and after several cups of wine, the villager thought of the Ba’al Shem Tov and the Torah that he had heard from him: When a man and his wife are together, the Shechinah (God’s immanent Presence) dwells between them. The Hebrew words for “man” (אִישׁ) and “woman” (אִשָּׁה) share the letter alef and shin that spell “fire” (אֵשׁ) and the different letters in each, yud and hei, spell God’s Name, י-ה. When the villager remembered that he and his wife were drawing a revelation of Godliness down to earth, he broke out into a dance with his wife.

The Ba’al Shem Tov showed this to his disciples, so that they would also see how the villager danced with his wife. He said that this dance created great joy Above and so, he too laughed.

The Ba’al Shem Tov’s teaching above surely expresses depths within depths, but the villager understood only the simple meaning of his words, without delving into hidden messages. According to the teachings of the Ba’al Shem Tov, “A simple Jew is connected to the simplicity of the substance” (of God). It is through this simplicity that it is possible to grasp God’s essence and not just His Names, which refer to God’s impact and manifestations. A Jew who is connected to God’s wisdom alone, will understand the Kabbalistic secrets of man and woman—namely that between their names in Hebrew, they harbor God’s fire and the letters of God’s Name, yud-hei—still he will not necessarily break into dance with his wife. One can go to sleep with lofty intentions and secrets, but the straightforward meaning is a living reality that is joyous and dance-inducing.

It is told of a wise young man who, upon returning from a period of study by the Ba’al Shem Tov, was asked: What did you learn there all these years that you did not know previously? The young man replied, “Shehakol nihyah bidvaro.”[2]

Just as in our story, this expression is an explicit saying of the sages. The young man learned from the Ba’al Shem Tov that its straightforward meaning is its essence.

The power of the simple meaning expressed in these stories can explain the difference between God’s “substance” and His “Name.” When we study Torah or focus on lofty secrets or words, the learning can remain within the confines of a Divine Name with no sense of what stands behind. As opposed to Kabbalah, Chasidut is not satisfied with that and endeavors to grasp the substance. It is specifically the simple meaning that is intrinsically connected to the essence. When a simple Jew says, “Baruch Hashem!” (“Blessed is God”) he refers to God’s essence, which is above all intellectual apprehension. The greatest Kabbalist, on the other hand, will only apprehend specific Names of God.

Another well-known story is told about the Ba’al Shem Tov:

With his cleaving to God’s essence, a true Rebbe can inspire life into all the Divine Names in the Torah. Something that could otherwise have been considered a nice allegory is suddenly revealed as completely real. For this reason, the Ba’al Shem Tov considered God’s Name “kachah” (כָּכָה), which can also mean “simply so” as the holiest Name of God—above and beyond the words “the crown of all crowns” (כֶּתֶר כָּל הַכְּתָרִים) for which this name is an acronym.

The examples we have noted of how a simple meaning that reinforced and made real by the Ba’al Shem Tov, teach us three important thoughts in the Ba’al Shem Tov’s enumeration of the three dimensions of reality: Worlds, Souls, and Divinity.

Why did the villager dance? He understood that if the Ba’al Shem Tov said that the Shechinah dwells between him and his wife, then this is an actual manifestation of Divinity. This is not the result of something that they do or because they are especially beloved by God. The intrinsic connection between them is the manifestation of Godliness here on earth. This is loftier than the creation of the world in the shehakol blessing and even loftier than man’s will to be loved by God, as in the second story. The villager simply wants to make God happy by dancing with his wife. Although at first glance this may seem silly, we see that the greatest tzaddikim invested effort into bringing joy to the bride and groom and would dance before them, just like the husband and wife in this story. The tzaddikim would dance and do all sorts of feats to bring joy to a bride and groom—so much so that other sages ridiculed them. King David’s wife, Michal, also derided him for dancing before the Holy Ark.

On the first night of Pesach, the night of the Exodus from Egypt, the Children of Israel had no prior preparation for or understanding of the Divine manifestation that they were experiencing. Like then, on this lofty night in which “the King of Kings manifests” to simple Jews, the villager created a dwelling place for God in the lower worlds.

[2]. These are the words of the blessing recited before partaking of many foods, recited often during the day. The words mean “by Whose word all has come to be.”