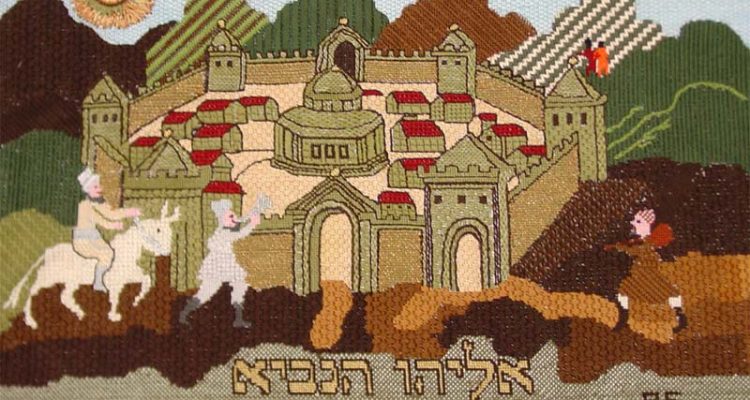 Rabbi Gershon of Kitov once asked the Ba’al Shem Tov to arrange a revelation of Elijah the Prophet for him. Shortly afterwards, a young man came to his home, and ate and slept there for a period of time. The young man was strange and did not find favor in Rabbi Gershon’s eyes.

After some time, Rabbi Gershon requested of the Ba’al Shem Tov once again for a revelation of Elijah. “You already merited it – through that strange young man!” the Ba’al Shem Tov answered. “Elijah the Prophet is revealed to every person, according to his worth.”

“Front and Back You Have Formed Me”

The way that Elijah the Prophet is revealed to a person is a reflection of the person himself. Not that Rabbi Gershon was similar to that strange young man, but he had a trait of severity and looking at outer appearances. This is what caused Elijah to appear to him in this form – and this is where he failed.

We can say that “according to his worth” (shovyo) really refers to the attribute of equanimity (hishtavut – same root as shovyo). The more that a person cleanses himself from the perspective of separateness tainted by foreign considerations – and learns to look at his surroundings with the light of “I place God before me always”[1] – the more holiness will manifest wherever he turns.

According to this story, we can explain that tzaddikim desired a revelation of Elijah specifically for this purpose: To examine themselves and identify the blemishes concealed in the depths of their souls.

Different approaches in psychology assert that the sub-conscious is the ‘mate’ of the conscious. Every person has concealed dimensions of which he is not aware. The ultimate purpose of psychological progress is when the concealed content is freed from its concealment and reaches the awareness of the conscious mind. Then the person ascends to new heights and is able to get to know his hidden dimensions, channeling his energies in a better way.

In Kabbalistic terms, we can see a parallel here to the secret of the creation of Adam and Eve as two back-to-back parts of the same body –“Front and back You have formed me.”[2] Originally, the female partner was only in back, meaning no relationship could be formed with her. The consciousness of the “front” partner could not discern her presence or communicate with her. Later, the process of nesirah (sawing off) began, in which the two sides were separated so that they could unite and bear offspring.

When Elijah the Prophet comes, he surprises us from behind. He manifests in a way that challenges the person who desires to see him at the point of his shortcoming, of which he was not consciously aware. It is not a pleasant experience for him to discover this shortcoming.[3] This is the painful nesirah, which detaches a person from his previous self-image, paving the way for the construction of a new, improved level – where he can rectify his shortcoming.[4]

The Manifestation of the Yechidah

After discussing that Elijah manifests as a reflection of one’s inner essence, uniting it with his conscious awareness – we can understand another important point in the outlook of Chassidut regarding a ‘revelation of Elijah.’ To do so, we will bring the following story:[5]

The pious Rebbe Shlomo of Karlin once came to the Alter Rebbe with one of his most excellent disciples, proudly relating to the Alter Rebbe that this young man had merited a revelation of Elijah. Reb Binyamin Kletzker was praying nearby. The Alter Rebbe looked at Reb Binyamin and said to Rebbe Shlomo, “This young man is saying the Sim Shalom section of the Silent Prayer right now. The Yechidah (the highest level of the soul, known as “the single one”) of his soul is illuminated in his prayer, and he is ‘laughing’ at your disciple’s revelation of Elijah.”

From what we learned above, we can understand the wonder – how the revelation of the Yechidah in a person’s soul is loftier than the revelation of the holy Prophet Elijah. Many people seek a revelation of Elijah even though they are not worthy of it. This is a type of holy ‘and do not stray’[6] – a request for spiritual levels and experiences of holiness that are not relevant to them and are not what God wants from them.

True, those people who seek a revelation of Elijah truly do desire to discover their shortcomings, to know their mission in life and to learn the specific Torah relevant to their souls straight from his mouth. Chassidut addresses these positive desires, teaching that the revelation of each person’s Yechidah, the essence of the soul, is loftier than a revelation of Elijah.

In previous generations, a person’s inner dimension was like a closed book. The same was true for the realm of service of God. Most of the lives of those who sought God were based on practical fulfillment of the Torah and its commandments. The elite few would include various forms of self-affliction in their service. The inner dimension would shine forth as a result of these practices, but was not directly addressed.

In our generation, in which the occupation with the internal dimension is nearing center-stage in our souls and in world culture, there is no more need to request a revelation of Elijah. “Drink water from your cistern and liquid from your well”[8]. The actual source can be opened before us. All that we have to do is to invest our efforts there.

Thus, the preference of a revelation of Elijah over the revelation of the Yechidah means that we choose to continue to search instead of to find – even though we know where to find it. Unfortunately, this is a widespread phenomenon today. A single man continues to search for his mate for many years, not understanding what is preventing him from marrying,

Sometimes, we can say that without knowing it, this man has become attached to the experience of searching. He enjoys the initial ‘high’ of creating the connection, opting for the easy life. He prefers the excitement of those first dates and the freedom of non-commitment. He prefers (at least unconsciously) this free life over married life, in which the complete bond already exists and the excitement of searching and finding is just a fleeting memory (at least outwardly).

Perhaps this is the meaning of the verse, “I find the woman more bitter than death -”[9] pertaining to a person searching for his own self and the exhilaration of revealing it – and of the self-revelation in the dating process. On the other hand, “He who finds a woman finds good and obtains favor from God,”[10] – describes the search for marriage for the sake of the ultimate wholeness of that union and the offspring that will be born.

There may be something ‘disappointing’ in the news that we can merit the revelation of the Yechidah. The part of us that is disappointed is the evil inclination of holiness, which seeks a revelation of Elijah because of the aura surrounding it. While the Yechidah is the true source of everything that can be attained in a revelation of Elijah, that is not what the average seeker is looking for. Instead, he seeks the experience and imaginary excitement.

Genuine seekers of God, however, will elevate their power of desire and seek their true soulmate. They will ascend to the essential point of their souls and from there will draw down the revelation of the essential wholeness of the soul of man – and will obtain favor from God.

Rabbi Chaim had a daily routine, with only a short time allotted for sleep. He laid down to sleep and a peasant came to his home and woke him with a loud, strange voice. Rabbi Chaim took hold of his tobacco pipe and hit the peasant.

The next morning, when he saw the Ba’al Shem Tov, he asked him why Elijah did not come to him. The Ba’al Shem Tov said, “Immediately after you accepted upon yourself not to be critical, you hit Elijah…”

[4] Mashiach comes when we are unaware (See Sanhedrin 97a). His light is more wondrous and lofty than anything anticipated by reality. Thus, Elijah, who comes to lay the groundwork for Mashiach’s arrival, is always surprising in the manner that he manifests. He never comes when we expect him, or in a manner that we would easily anticipate.

The Alter Rebbe says that “The Mashiach that the world anticipates will never come, while the Mashiach who does come – nobody will want.” Every revelation of Elijah breaks the imaginary Mashiach just a bit. He makes us recognize our shortcomings and rectify those dark areas hidden deep within our personalities. By doing so, he builds within us the true anticipation for Mashiach Ben David and the complete redemption.