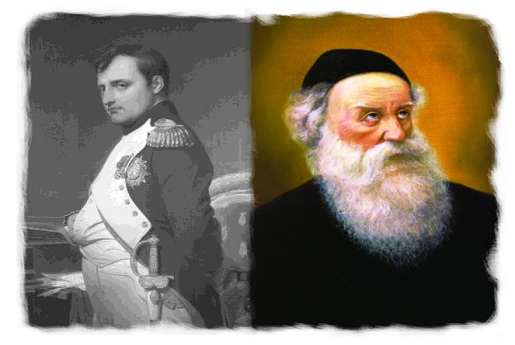 24th of Tevet: The Rabbi and the Emperor

For Part 2, Read: "The End of the Enlightenment"

Two-hundred-and-one years ago, on Motzei Shabbat (the night following Shabbat), 24th of Tevet 5573, Rabbi Shneur Zalman of Liadi passed away. He was the author of the Tanya and a code of Jewish law. He did not die of old age on his bed at home, but while on a hasty escapade that took place in the height of the severe Russian winter.

What connection is there between Rabbi Shneur Zalman of Liadi and Napoleon Bonaparte? These two figures, whose lives seem so far removed from one another, lived during the same era. In fact, the clash between them was perhaps the real war that took place behind the scenes of the French Revolution.[1]

In his boundless thirst for power, after conquering almost all of Europe, the French Emperor, Napoleon Bonaparte, set out on a huge war expedition and invaded Russia in the summer of 5572 (1812). As the French invaders where approaching Rabbi Shneur Zalman’s town, he transported his entire family in wagons, and fled with them into the depths of Russia. This was a last resort to avoid surrendering to the French rule. His concern for the fate of the Jews, together with the perils of the hazardous journey, cut short Rabbi Shneur Zalman’s life.  His descendants even said in his name that these events shortened his life by ten years.

Throughout the war, Rabbi Shneur Zalman expressed unwavering fidelity to the Russian authorities. He fervently prayed for the health of the Czar. Moreover, he kept contact with senior commanders of the Russian military and procured vital information for them regarding the location of the enemy forces and their upcoming plans. The Russians, for their part, accredited his role in their victory.[2] One of his greatest followers even endangered himself by spying on behalf of the Russians from within Napoleon’s closest command! It is a well-known fact that Napoleon attributed great importance to Jewish leaders, and it is related that he expended effort to meet Rabbi Shneur Zalman in person. However, Rabbi Shneur Zalman for his part made every effort to avoid any meeting with Napoleon. He even took pains to ensure that none of his personal belongings would get into Napoleon’s hands.

Praying for the Welfare of the Kingdom

Before we explain this peculiar battle in which one side wanted to meet the other, but the other side fled like wildfire from meeting him, let’s first ask why Rabbi Shneur Zalman was so adamantly pro-Russian? It’s not as if under the auspices of that Russian “bear” we got to taste much “honey”; neither before Rabbi Shneur Zalman, nor after him…

The simple reason for Rabbi Shneur Zalman’s choice was the golden rule of thumb that Jews have adopted wherever they wandered in the lands of the Diaspora: remain loyal to the ruling power. This was already true in the times of the Prophet Jeremiah, who warned the exiles in Babylonia, “And seek the peace of the city where I have exiled you and pray for it to God, for in its peace you shall have peace.”[3] Similarly, the sages teach us to, “Pray for the peace of the kingdom.”[4] This is why prayers for the welfare and success of the ruling powers and the king were instituted as part of thesiddur (Jewish prayer book).This is also why we want the country we live in to be successful, even though it may appear spiritually dark.

However, Rabbi Shneur Zalman’s decision to prefer the Czar over Napoleon had broader considerations. Rabbi Shneur Zalman resolved that the Jews would benefit most by continuing to live under Russian rule rather than under French rule.

Subjugation is better than Emancipation

Let’s read Rabbi Shneur Zalman’s own justification to his follower who spied on behalf of the Russian army:[5]

On the scales were two possibilities, each one worse than the other. This was a historic junction between the old medieval world and a promising new one. The French Revolution professed to announce the end of feudalism and the oppressive rule of Christian theocracy, and an end to ignorance and superstition. In their place, it promised to bring “liberty, equality and fraternity” to humankind, and an industrial revolution that would change people’s lives. Napoleon’s conquests spread this new spirit of emancipation to the entire world. Breaking down all the old conventions and partitions brought promise to the Jews in its wake―the day would come when they would have equal rights, and could merge into a modern world without racial discrimination. Indeed, with this goal in mind, Napoleon advocated the rights of the Jews under his rule.

Let’s suppose that all these promises would indeed be realized. Would this new world be a better place for Jews? Retrospectively, we know very well that, alongside emancipation and the improved conditions under which the Jews lived in the West, there followed a corresponding decline in Jewish observance. This forms a sad equation: equal rights for the Jews plus more secular education equals leaving traditions behind. Additionally, a weakening of Torah and mitzvah observance often leads to complete assimilation, God forbid. This was the danger that emancipation held in store for the Jews. Torah giants of all kinds identified this hazard, and they were all wary of it. They wanted neither the honey nor the sting of emancipation.

On the other hand, “our master Alexander,” the Russian Czar, represented the old world, and medieval times at their peak. Rabbi Shneur Zalman was under no delusion: the Czar’s rule had been and would be bad for the Jews: “the Jewish People will become poorer, and they will be more humiliated,” but Judaism would flourish. While materially they would remain poor, spiritually it would be beneficial for the Jews. The walls of the ghetto, the hatred and the alienation would guard the Jewish community well against the winds of assimilation, and the heretic spirit of the enlightenment would not easily penetrate the Jewish fortresses.

One explicit source for Rabbi Shneur Zalman’s decision in favor of the Russian Czar can be found in the Midrash regarding the Covenant Between the Pieces. Abraham received the announcement that his descendants would undergo a long and cruel exile: “And they will enslave them and torture them for four-hundred years.”[6] On this verse, the sages state that the Almighty told Abraham to choose how his descendants should be punished if they do not follow the Torah. The two options were either Hell or being oppressed by the non-Jews, “Abraham sat and pondered that entire day, which should I choose, Hell or the non-Jews?” For Abraham, the archetypal soul of love, the choice was a very difficult one. But in the end, he decided that oppression was preferable. This was the only way to guard the special character of the Jewish People, and the only way to preserve its eternal existence.

Nonetheless, the matter of who to side with was a great controversy among the Chassidic masters of the time. In contrast to Rabbi Shneur Zalman, there were those who said that it would be better that the French win the war. Their hope was that this was the War of Gog and Magog that would overturn the world and bring the redemption (even if there would be great suffering involved). This was the viewpoint held by the Maggid of Kaznitz and Rabbi Menachem Mendel of Riminov. Although some small-minded people might ask, “who asked them?” We know that God’s Providence takes into consideration the opinions of the tzadikim. Therefore, there was definite competition between Rabbi Shneur Zalman, and Rabbi Menachem Mendel of Riminov and his colleagues, concerning whose opinion would be accepted in Heaven, and whose prayers would be the most effective. According to Lubavitch tradition, the spiritual battle that determined the outcome was on Rosh Hashanah 5573, since on Rosh Hashanah the verdict is given in Heaven for the entire year. On that day, Rabbi Shneur Zalman made haste to sound the shofar (ram’s horn) in the early hours of the morning, intending to signify Napoleon’s downfall (preceding the other tzadikim who lingered over the spiritual preparations before blowing the shofar). Then the tzadikim sensed that the decree had been decided in the Heavenly tribunal that Napoleon would fall.[7]

The far-sighted will realize that Rabbi Shneur Zalman of Liadi was not a lone fugitive on the battle field. Not only did he assist the Russians on the tactical plane, he and his colleagues literally headed the battle and determined the most crucial strategic processes.

[2] A letter sent by Rabbi Shneur Zalman’s wife, after her esteemed husband’s passing, has recently been published (Segulah journal, Av 5770 edition) in which she mentions this fact, “the military officers used him [Rabbi Shneur Zalman] to locate the camps of the enemy forces and as a result of his successes in this field, he merited a medal from the military secretariat.”

[7] Although the accepted opinion is that the Maggid of Kaznitz was pro-Napoleon, he apparently changed his mind towards the end of the war. One tradition states that during the Torah reading ofParashat Yitro, he interpreted the words, “You will surely wither” (נָבֹל תִּבֹּל) to read the similar sounding, “Fall, Napoleon” (נַפּוֹלִיאוֹן תִּיפּוֹל). Another tradition holds that he said this on Purim with reference to the words in Megillat Esther “You will surely fall” (נָפוֹל תִּפּוֹל). Both these occasions were after the passing of Rabbi Shneur Zalman.

Why do we suffer? Are minor irritations included in suffering? How did King David deal with suffering and how can we apply his method in our own

The French Enlightenment is...

[Editorial Note: What follows is an excerpt from a