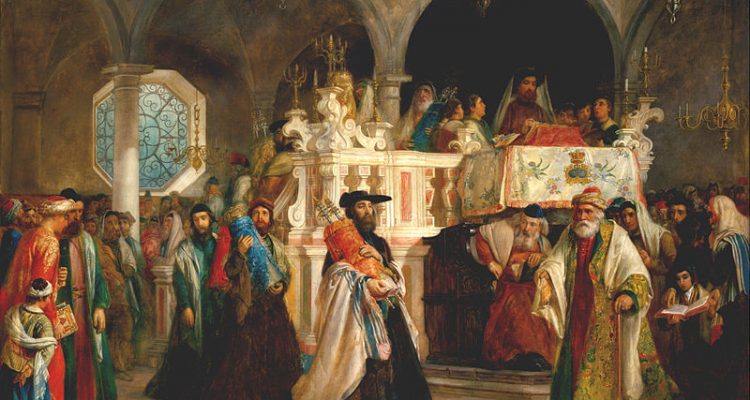 As mentioned in our previous article on Sukot, the Prophet Jonah received his prophecy in merit of his exuberant joy during the water-drawing celebrations in the Temple.[2] However, the prophecy he received threw him into a flight of manic depression as we will see from the wording of the verses:

Initially, God told him to continue on his upward rise, telling him, “Rise and go to the great city of Ninveh,” and indeed, Jonah seems to respond in kind, “And Jonah rose…”[3] However, it immediately became apparent that Jonah’s spiritual high did not have enough force to elevate him any further, “And Jonah rose to flee from before God, and he descended to Jaffo.” In fact, the verb “descend” (ירד) appears twice more in the first verses of the book of Jonah, closely followed by the verb “fall asleep” (לְהִירָדֵם). This suggests a further attempt to descend into oblivion, especially considering that “descend” (ירד) and “fall asleep” (לְהִירָדֵם) share the same two-letter root (רד)! In fact, the chapter continues with numerous appearances of the verbs “toss” (הטיל), as in, “And God tossed a great wind”[4] and “to cast [a lot]” (הפיל), as in “they cast lots,”[5] which suggest that Jonah himself was thrown into a tumultuous descent. Jonah later describes his own descent, from the stomach of the great fish that swallowed him alive in the ocean depths, “from the belly of the grave I cried out… And You cast me into the deep in the heart of the seas… the deep encompassed me… To the bottom of the mountains I descended… but You brought up my life from hell.”[6]

After Jonah’s heartfelt prayer, he began to rise once again, as God repeated His prophecy to him, “Rise and go to the great city of Ninveh.”[7] This time, Jonah, completed his mission, “And Jonah rose and went to Ninveh…”[8] However, having completed his mission, Jonah was once again thrown into emotional turbulence at the various events that God sent his way. Such was the extent of his psychological suffering that he even expressed a preference for death over life.[9]

Expressing Thanks for Triumphing over Bipolar

One verse in the Torah that expresses the sense of manic depression, or bipolar disorder, reflected in Jonah’s alternating states of consciousness is, “They rise up to the heavens and descend to the abyss.”[10] This verse appears in the psalm from which the sages learn the four types of individuals who should bring a thanksgiving offering to the Temple.[11] One of these four is someone who travels out to sea, and is saved from the danger of drowning when a storm breaks out.

The symbol of a ship rising and falling on a stormy ocean, in danger of breaking apart, is particularly relevant to the story of Jonah. He was in precisely such a situation! We associate this verse with the highs and lows of bipolar disorder because, as we have now seen; it appears that Jonah himself experienced a form of it.

Taking Off and Landing Safely

The final day of the festival of Sukot is Simchat Torah, when our joy reaches its climax. Unrestrained by the confines of the sukah, and unhindered by the limits set by any particular mitzvah, we express our love of God by dancing with His Torah in pure, unadulterated elation.

Even though Simchat Torah manifests a higher form of joy than the previous days of the festival of Sukot, it is all amidst the backdrop of the Days of Awe. The message of Simchat Torah then is that we can reach extreme highs and lows without becoming manic or depressive. In contrast to the adverse effects of bipolar disorder, the entirety of Sukot represents the holy version of bipolarity. Since Simchat Torah allows us to safely achieve extreme highs, this day of the year represents the ultimate cure and remedy for the profane and unhealthy version of bipolar disorder chronicled in the annals of psychology.

Adapted from Rabbi Ginsburgh’s class on Torah and Psychology, Chile, 5769

[1] As we began to contemplate since Rosh Hashanah, each holiday entails a method of healing for a specific psychological ailment.

[5] Ibid v. 7, in which the verb appears three times in succession.

[12] On Simchat Torah we are capable of reaching the level of super-rational joy that is ultimately achieved on Purim.

The direction of our training – “wondrous advisor” By

Serving God in our Generati...

Redefining What You Are (the following is a translation

Rabbi Ginsburgh explains the importance of compassion in healing.

The Rebbe Rayatz: “We