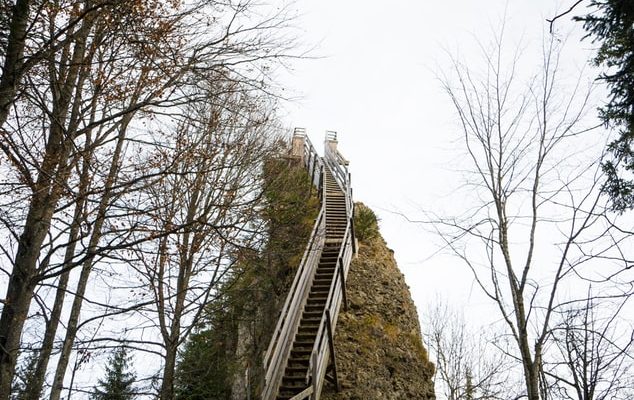 Descent and Ascent: It’s All a Plot

One of the “principles of faith” appearing in the teachings of the Torah’s inner dimension is that every descent is for the purpose of a subsequent ascent. Our souls descend from the loftiest heights of existence before God, to the depth of the pits of this corporeal world. God, in His goodness, sends us on this dangerous journey with a worthy goal: eternal ascent fueled by our service here in this world.

It is easy enough to understand this regarding the descent of the soul into the body and the material world, for it is only in the body that the soul can fulfill God’s commandments. But what about a person who suffers one descent after another and who, instead of taking advantage of the opportunity to fulfill the commandments in this world, continuously falls and sins?

Regarding the sin of Adam – the root cause of all the sins of humanity – the sages refer to the verse, “Awesome is His plot on the children of Adam,”[1] explaining that in addition to human choice, the sin and its punishment also include a dimension of Divine machination. God anticipates the sin—and in a certain sense even brings it about in the circumstances in which He places people—and He even includes it and the death caused by it as part of the same descent, whose ultimate purpose is an ascent. Thus, we can identify, “a descent for the purpose of ascent” in every sin. The inevitable (as it were) descent will ultimately bring the sinner to a place where only the penitent can stand, a state of being that is higher than the one occupied by those who are consummately pious.

The ultimate purpose of the descent, however, is not always the ascent of the person in question. Sometimes, his descent from his natural state aims to bring about the ascent of someone else, who is deeper in the quagmire than he. This is the meaning of the sages’ teaching about King David who was not really predisposed to falling in the story with Batsheva, but that he did fall in order to blaze the trail for sinners and to teach others how to repent (figuratively called, the yoke of repentance). [The sages teach the same principle regarding the sin of the Golden Calf.

Thus, lofty tzaddikim fall from their illustrious levels (albeit, in a most subtle manner) in order to connect to those lower than them and bring them up with them. As “The members of Your Nation are all tzaddikim,” we can understand that the Divine soul descends to this world in order to bring about the ascent and rectification of the animal soul in which it is enclothed. Every flaw and fall that a person experiences is meant to evoke the ascent of others with him.

On a deeper level, this descent for the purpose of ascent in not dependent upon the righteousness of the person descending or the intensity of his repentance in order to re-ascend and bring others with him. Instead, there is a spiritual-physics law at work here: Newton’s Third Law of Motion states that “For every action there is an equal and opposite reaction.” The descent of one body will necessarily cause the ascent of a different body. The Law of Conservation of Energy teaches that any spiritual energy that we lose in our descent, will reach someone else and engender a spiritual ascent in him.

This perspective relieves the person from the feeling that he is at the center of the universe and also frees him momentarily from the grim sense of responsibility for his descent and the tension of his obligation to repent – which are all difficult specifically at the low energy levels in the wake of the descent. He discovers the dimension of the positive Divine plot weaved by God: my descent was for the good of someone else. It  was the means by which he ascended! This awareness, coupled with my ability to nullify myself to the Congregation of Israel or the collective and lose my level for the benefit of the other is the path to the greatest ascent. The descent evokes an upward surge in a different soul in my merit. In the merit of that ascent, I can also return, ascend with the other soul and inspire an ascent of the entire world to God.

Photo by Daniel on Unsplash

The month of Av is

The five revelations of light

The Kabbalistic Promise of Pas...

The Arizal promised that whomever