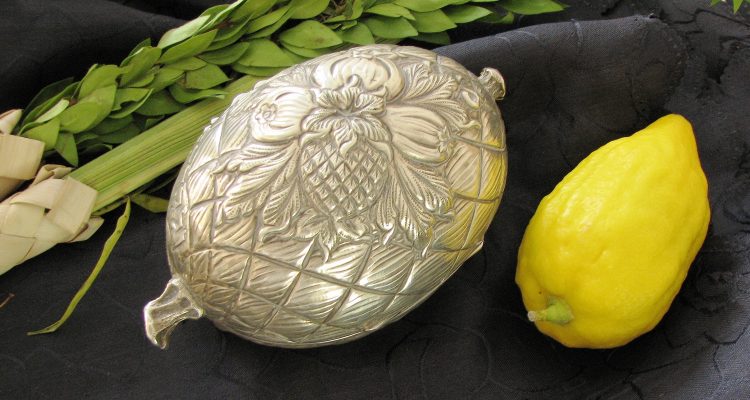 On Sukkot we have the mitzvah of blessing over the four species. We take a palm branch, myrtle branches, willows and a citron fruit in our hands in a specific manner and raise them together in a specific manner. Taking them together and raising them is similar to raising a flag (nes). It is written that the raising of the nes of the four species gives us miraculous (another meaning of nes) power – supernatural power above our human nature, to withstand trials (nisayon, also from the root of nes).

God created this world for us to withstand trials. When we face the darkness of this world and believe in God, draw strength, overcome the trial and ride the wave, we merit great light, as in the verse, “The nation walking in the darkness saw a great light.”[1]

There are four types of trials that a person has to overcome in life. He receives a specific power from each of the four species to successfully negotiate them.

Each of the four species must be particularly esthetic, but the etrog is the most esthetic. In the Torah it is called, “the fruit of the citron tree.”[2] It is written that etrog (אתרג) is an acronym for ‘אל תבואני רגל גאוה ‘ “Let not the foot of pride overtake me.”[3] As soon as a person is successful at an endeavor, he can be over-satisfied with himself, overly conscious of himself and suffer from an inflated ego. But in the words of King David, “For everything is from You and from Your hand we have given you.”[4] We should be careful not to think that it is our own prowess that has brought us success. Instead, we must know that it is God who has given us the ability to succeed. When we perform the mitzvah of the four species, the etrog empowers us to negotiate the trial of success, throughout the year and throughout our lives.

On Sukkot we take three myrtle branches, two willows, one palm branch and one etrog. The myrtle leaves are also three, as they are triangular. This alludes to the three Patriarchs: Abraham, Isaac and Jacob. There is another trio of very important souls in the Bible: Chananyah, Misha’el and Azaryah. These were three Jews who, during the Babylonian exile, refused to bow down to the idol that Nebuchadnezzar, the king of Babylon had made. Nebuchadnezzar had them thrown into the fiery furnace, just as Nimrod had done to Abraham. Miraculously they emerged from the furnace unscathed. The prophet Zechariah writes about these three tzaddikim, “And He stands between the myrtles.”[5]  Chananyah, Misha’el and Azaryah are the three myrtles. And who is “He” in this verse? God, the Shechinah.

The myrtle has a pleasant fragrance. A person who is willing to sacrifice his life like Chananyah, Misha’el and Azaryah to sanctify God’s Name exudes a pleasant fragrance. This pleasant fragrance is the sense of Mashiach (about whom the verse says, “And he will give him the scent of fear of God.”[6]) The myrtles give us the power of self-sacrifice to overcome any trial and never to bow down to any type of idol. Negative social norms are also idols. A Jew must have a very strong backbone. He should not be willing to bow down, no matter what – and then he exudes the fragrance of Mashiach.

Palm Branch (Lulav): The Trial of the Evil Inclination

In Kabbalah, the palm branch parallels the sefirah of foundation, corresponding to the procreative organ. The archetypical soul that represents the attribute of foundation is Joseph the tzaddik. The palm branch in the four species is Joseph, who withstood the great temptation of the wife of Potiphar. In our generation, many people fall into what we call “the blemish of the covenant” (nevertheless, “God supports all those who fall”[7]). Where do we get the strength to overcome this trial? The verse about Joseph says, “And he fled (vayanos, from the root of nes). The strength to overcome this trial comes from the palm branch on Sukkot. This is why we make the blessing over the palm branch. It is the most difficult trial of all and God blesses us, empowering us to overcome it. In the merit of overcoming these trials we will merit Mashiach the son of Joseph and after him, Mashiach the son of David.

Willow (Aravah): Every Strike a Kiss

The willows have no taste or smell, and they represent the simple Jews. Our master, the Ba’al Shem Tov, specifically loved the simplest Jews for the simple reason that were part of God’s creation. Every Jew has a Divine soul and if he is missing from the bundle of the four species, the mitzvah cannot be performed.

The willows empower simple Jews to overcome trials. The trial of the simple Jew is the trial of clinging to faith in God in every situation in life. Whether things are going well or not, we must strengthen our faith in God, believing that all is Divine Providence and that, in the words of Rabbi Akiva, “all that God does is for the very best.” A simple Jew may not have flavor (Torah) or fragrance (good deeds) but he does have simple, sincere faith in his heart. The Ba’al Shem Tov said that not only does a simple Jew have simple faith in his heart, but that he is connected to the simple essence of God. There is nothing that separates him from God.

Of all the species, the willows are the subject of a special custom, initiated by the prophets, on Hoshanah Rabbah, the last day of Sukkot. We take five willow branches and strike them on the ground. What is special about the willows that they merited this special custom? The prayer that we recite after we strike the willows says that the willows are the secret of kissing. On Simchat Torah, with the prayer for rain, the unification between God and the Congregation of Israel takes place. Prior to the unification, there is hugging and kissing. The seven days we spend in the sukkah is likened to the hugging part (the sukkah’s walls hug those dwelling inside), and the kissing is the striking of the willows, whose leaves are shaped like lips.

This may seem a bit strange. What does striking willows on the ground have to do with kissing? That is something that only a simple Jew can answer, when he feels with his simple faith that every strike, every blow, is actually a kiss. No matter what happens in life – specifically when reality strikes us – it is a kiss from God. The striking kiss tells us that soon we will unite with God, and a new generation of blessed redemption, sons and daughters enveloped in Torah, mitzvot and Chassidut, will be born. In the merit of this, we will merit the arrival of Mashiach, a good and sweet year of the true and complete redemption for all Israel.

Question: My wife and I