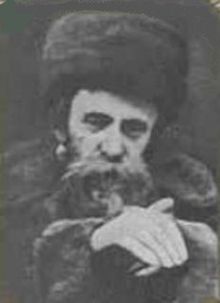 The Kingmaker: the Wondrous Foresight of Rebbe Aharon of Belz

Rabbi Aharon Roke’ach of Belz – the fourth Rebbe of the Belz dynasty, was born in Elul 5640 (August 1880) in Belz (which was in Galicia, Poland at the time and today is in Ukraine). His father, Rabbi Yissachar Dov, was the third Rebbe in the dynasty and his mother, Batya Ruchama, was the granddaughter of Rabbi Aharon of Chernobyl, after whom Rabbi Aharon was named. Growing up, Rabbi Aharon learned Torah from his father and paternal grandfather, Rabbi Yehoshua. Before he was eighteen, he married his cousin, Malkah (who would later be murdered in the Holocaust along with all their children). After his father passed away in 5687 (1927), Rabbi Aharon was appointed to succeed him as the Belzer Rebbe and Chief Rabbi of Belz. Rabbi Aharon was known from a young age for his great holiness, so much so that one of the tzaddikim of the generation said regarding him, “Apparently, the evil inclination has forgotten about him.” Rabbi Aharon was also known for his great love of Israel and for not being willing to hear anything negative about any Jew, regardless of their level of Torah observance. He said that he was born with the trait of compassion. During the Holocaust, he escaped Poland, where the Nazis were pursuing him personally, first reaching Hungary and then the land of Israel. After living temporarily in Jerusalem, he made Tel Aviv his home. He married twice more but did not have any children. Rabbi Aharon rebuilt the Chassidic sect of Belz in the Holy Land. He passed away on Saturday night, 21 Menachem Av and is buried in Har Hamenuchot in Jerusalem.

The first story about Rebbe Aharon was told by Rabbi Mordechai Shmuel Ashkenazi (the previous rabbi of Kfar Chabad).

He related that in 5704 (1944) after the tzaddik Rabbi Aharon of Belz managed to escape the clutches of the Nazis (with the help of the Previous Lubavitcher Rebbe) and made aliyah to the Holy Land, he stayed for some time with his great-grandfather, Rabbi Shneor Zalman Ashkenazi, one of the elders of Chabad Chassidut in Israel, in his home in the Katamon neighborhood of Jerusalem. Rabbi Aharon asked his host regarding all his family members, and Rabbi Ashkenazi related the details, including details about his son, Rabbi Meir Ashkenazi, who at the time was serving as the rabbi of Shanghai, where many Jewish refugees had fled from blood-soaked Europe. Rabbi Aharon said to his host, “We can assume that this war will end sometime and that your son from Shanghai will come to visit you. If so, please ask him to come to visit me.”

Two years later, Rabbi Meir Ashkenazi did come to Israel and, as his father requested, he went to visit the Tzaddik from Belz at his home in Tel Aviv. Shortly before that, Rabbi Meir had suffered a stroke, which was visible on his face. Rabbi Aharon noticed this, and said to Rabbi Meir, “True, I am not your Rebbe, but due to my respect for your father’s graciousness in hosting me, I have some advice for you. Fulfill the following three recommendations to improve your health: First, do not listen to music. Second, do not eat any dairy. Third, do not visit the graves of tzaddikim.” Rabbi Meir accepted Rabbi Aharon’s advice.

A few years later, when the war was over and the last of the refugees had left Shanghai, Rabbi Meir moved to Crown Heights, NY, home of the Lubavitcher Rebbe and world Chabad headquarters. For an entire year after the passing of the sixth Lubavitcher Rebbe, Rabbi Yosef Yitzchak Schneerson (the Rebbe Rayatz), the Lubavitcher Rebbe refused to fill his father-in-law’s role as Rebbe. In those years, the Rebbe was known as the Ramash, a shortening of Rabbi Menachem Schneersohn. When people would turn to him with issues that required the blessing or counsel of a rebbe, the Ramash would send them to the grave of the Rayatz. During that time period, Rabbi Meir came to the Rebbe, with a pidyon nefesh, (a written question given by a chassid to his Rebbe or a tzaddik, usually accompanied by some money to be used for charity). In response, the Ramash told Rabbi Meir, as he did to all those who turned to him then, to go to the grave of the Rebbe Rayatz and pray for the issue that concerned him there. Rabbi Meir, however, told the Ramash that he cannot go to the graves of tzaddikim, relating the advice that Rabbi Aharon had given him.

When the Ramash heard his words, his face became very serious and he answered, “The Rebbe of Belz told you that he is not your Rebbe, so you could have asked him about the source of his counsel. But because those words came out of his mouth, we must relate to them with the utmost respect.” The Ramash left the room for a moment and returned wearing a Chassidic frock and a gartel and received the pidyon nefesh from Rabbi Meir. This was the first time that the Ramash received someone for yechidus (a private audience) as a Rebbe, foreshadowing his imminent official acceptance of the role of Rebbe.

Rabbi Mordechai Shmuel added that when he told this story to one of the Belz chassidim, saying that he did not understand the essence of the Belzer Rebbe’s advice, the chassid told him that he also did not understand all the recommendations, but it was clear to him that the third recommendation – not to go to the graves of tzaddikim – was designed, through Rebbe Aharon’s wondrous foresight, to bring the Rebbe to the point where he would accept the role of Rebbe upon himself.

It is written about the Mashiach that he is a “wondrous advisor.” This also describes all the true tzaddikim, who are an “expansion of Moses in every generation.” A true tzaddik knows how to identify the essential point of the issue and give good counsel – “a wondrous advisor.” The advice of the tzaddik comes from his extra measure of understanding (binah) and also from his faculty of knowledge (da’at) with which he feels the person seeking his advice. The tzaddik connects to the person seeking his advice with his faculty of knowledge, while the wondrous counsel comes from his extra measure of understanding, as in the verse in Isaiah (25:1), “Wondrous counsel [comes] from afar with faithfulness and truth.” What is the wondrous advice of the Belzer Rebbe in this story? That he foresaw and pre-arranged the situation in which the Lubavitcher Rebbe would have to step into his new role.

The second story about Rebbe Aharon shows his great esteem for the Lubavitcher Rebbe:

As the 19th of Kislev of that year 5711 (1951) approached, before the Rebbe had officially accepted his role as Rebbe, he sent a letter all the Chassidic Rebbes and important rabbis of the generation and requested that on the 19th of Kislev, they would hold farbrengens in honor of the yahrtzeit (day of passing) of the Maggid of Mezeritch and the release of the Alter Rebbe from the Czarist prison some 200 years earlier. The Rebbe requested that in their farbrengens, the Rebbes would speak about the importance of the study and dissemination of Chassidut and its wellsprings.

Among the recipients of the letter was Rebbe Aharon of Belz, who was considered at that time to be the tzaddik of the generation. Rabbi Aharon’s assistant opened the letter and read it to him. The assistant, who did not know the new Lubavitcher Rebbe, felt that it was disrespectful of the Rebbe to make a request of the much older Rabbi Aharon. Under his breath, he said in Yiddish, “A young man is telling the Rebbe (Rebbe Aharon) what to do?!” The Belzer Rebbe became very serious and said to him, “You should know that you are playing with fire. Go ritually wash your hands three times and say, ‘I regret my words’ three times.”

This story is also related in Belz. At the time that this story took place, the Rebbe was still a young man and the Belzer Rebbe was the eldest of the righteous of the generation. The fact that Rebbe Aharon described the insult against the young Torah scholar, the Ramash, as, “playing with fire” was a declaration that this is a tzaddik from whose fire we must beware, as is written in Pirkei Avot, “Beware [even] their embers.”

This story, which endorses the piousness of the Rebbe, refers to the sefirah of foundation (yesod), “And a tzaddik is the foundation of the world.” In Kabbalah it is written that fire comes forth from the foundation, from which we must beware. 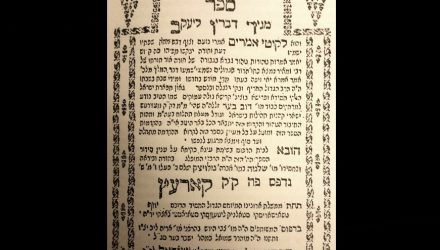