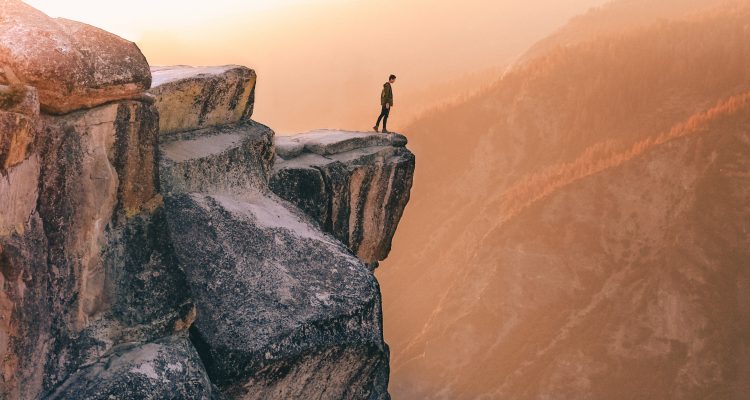 The Maggid of Mezeritch: Self-Nullification on the Precipice

Rabbi Dov Ber of Mezritch, known as the Maggid of Mezritch, was the greatest disciple of the Ba’al Shem Tov. He was born in Lukatch, Ukraine. His father, Rabbi Avraham, was descended from the Mishnaic sage, Rabbi Yochanan Hasandlar, and generations before, from King David. As a child, Rabbi Dov Ber was obviously brilliant and his father sent him to study Torah in the yeshivah of the Pnei Yehoshua (Rabbi Yaakov Yehosuha Falk) in Levov. After his marriage, he was a teacher in Toltshin and began learning Kabbalah. Later, he was a maggid (a preacher) in a number of villages.

As opposed to his Rabbi, the Ba’al Shem Tov, who would travel from place to place, the Maggid stayed in Mezritch and from there sent his students to teach Torah and establish centers of Chassidic life throughout Russia, Poland and even Germany. A few months before he passed away, the Maggid moved to Anapoli due to a plague that had broken out in Mezritch. He passed away on 19 Kislev 5633 (1872) and is buried in Anapoli.

The great Chassidic aliyah to the land of Israel came from the Maggid’s study hall, led by his disciple, Rabbi Menachem Mendel of Vitebsk who made aliyah in 1777. Among the Maggid’s other famous disciples were his son, Rabbi Avraham the Angel, the Alter Rebbe of Chabad, the brothers, Rabbi Zusha of Anapoli and Rabbi Elimelech of Lizhansk, Rabbi Aharon the Great of Karlin, the brothers Rabbi Pinchas Ba’al Hahafla’ah and Rabbi Shmelkeh of Nikolsburg, Rabbi Yehudah Leib Hakohen, Rabbi Ze’ev of Zhitomer and many more.

Our story about the Maggid begins when the holy brothers, Rabbi Shmelkeh and Rabbi Pinchas first came to the Maggid. They wanted to ask him to guide them – to prescribe a path for them in their service of God.

“Why did you travel to me? After all, you lack nothing. You are great in Torah, both revealed and concealed and you serve God. You do not need me,” said the Maggid as soon as he saw them.

“Nonetheless,” the brothers answered, we came to ask you to guide us in our service of God.”

“When you rise for the Midnight Prayer,” the Maggid answered, “first wash your hands ritually, with all the intentions of the holy Ari. After that, say the morning blessings, recite the Midnight prayer with all the intentions, study Torah with true cleaving to God until the morning light. Afterward, immerse in the mikvah with all the intentions of the Ari, pray the Morning Prayer with cleaving to God, for a very long time. And if after all of that, one of you may think that “I just gave my Creator pleasure,” God will take all that you did from the moment that you rose at midnight, will make a ball out of all your service and will throw it into the mouth of the deep abyss.”

“Really, we should not have traveled by wagon to you,” said the brothers. “We should have crawled here on all fours, the entire way!”

The final statement spoken by the holy brothers demonstrates the quintessence of self-nullification (when it is unified with lowliness). It is the feeling that all of my accomplishments are condensed into a tiny point (symbolizing the sefirah of Kingdom) and thrown into the mouth of the so-called great abyss, the sefirah of Kingdom of the Sitra Achra (the Other Side).

[After the Maggid’s passing, each of his holy disciples took a different aspect of his teachings. For instance, Rebbe Levi Yitzchak of Berditchev took the pillar of clinging to God during prayer. When people saw him pray, they would see the greatness of the light he revealed—it was like watching a lightning storm. The Alter Rebbe, Rabbi Shneur Zalman of Liadi, who founded Chabad, begged his companions to increase the vessels—to make many vessels that would spread the light that Chassidut had accessed and brought down into the world. To create vessels, one has to focus on self-nullification. Thus, in Chabad teachings, one hardly hears about the pillar of clinging to God. It is not missing, simply concealed in a lengthy process described, for example, in Rebbe Hillel of Paritch’s commentary on the Mittler Rebbe’s Sha’ar Hayichud. In any case, the Alter Rebbe reversed the situation from the Ba’al Shem Tov’s stress on clinging to God with self-nullification included therein to a state in which the stress is on self-nullification and clinging to God is included therein.]

But, since the brothers were Torah giants, their first meeting with the Maggid did not end with that. The story continues:

The brothers asked the Maggid to honor them by discussing some of the revealed aspects of the Torah. The Maggid began elucidating a very complex topic in Torah and then proceeded to reveal grave difficulties with his own explanation. He then responded to these difficulties himself, with genius. After he had laid all the difficulties to rest, he revealed another major flaw with his rebuttal, which essentially contradicted its entire reasoning. He then responded to the original difficulties in a different manner, building an entire construct of intricate Torah detail. And then he again razed the construct to the ground. The Maggid repeated this nine times. His power of complex reasoning was so honed and deep, that the two Torah geniuses literally had to literally squeeze their heads in order to employ every ounce of their intellect just to follow it.

After the brothers left, the Maggid remarked that they “almost pushed me down.”

What did the Maggid mean with this last statement?

We can learn the answer from something similar the Ba’al Shem Tov once said. The Ba’al Shem Tov’s grandson, Rabbi Moshe Chaim of Sudilkov (later known as the Degel Machaneh Efraim after his book) relates that once, when he was a little boy, he was sitting on his grandfather’s lap and the Ba’al Shem Tov said to him, “Believe me that there is in every generation one individual who hears Torah—not from the mouth of an angel and not from the mouth of a saraf (fiery angel), but rather from the mouth of the Almighty and His Divine Presence. Yet this individual is in constant fear of falling into the great abyss if for one second he will think highly of himself.” This is also connected to what the Ba’al Shem Tov said moments before he passed away (Psalms 36:12), “Let not the foot of pride overtake me,” ((אַל תְּבוֹאֵנִי רֶגֶל גַּאֲוָה, something that is also told about the holy Arizal.

What the Maggid was saying was that in order to speak such great Torah learning as he had before the two brothers, he had to knowingly put himself in danger of becoming aware of his own greatness. But, because of his love of Israel, because of his concern that the two brothers attach to the light of Chassidut through himself, he had brought himself to the very precipice of the great abyss, teetering on the very edge of losing his self-nullification. However, in the end he was successful in preventing his fall.

Photo by Juan Davila on Unsplash