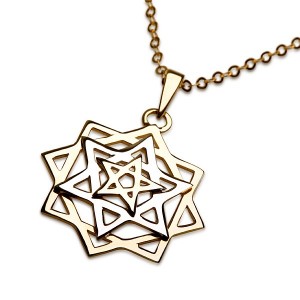 According to Kabbalah, peace and protection are most sought by those souls who are from the left, feminine aspect of reality. When Abraham became the first believer in G-d, he was granted the power to protect his offspring.

The form of the shield of Solomon expresses the most fundamental underlying principle of art, both of Divine art (i.e., the creation of the world) and human art: the golden section. The Golden Section is a mathematical ratio represented by the formula:

The unique element of this ratio is the square root of five, which is reflected in the form of this star, as follows.

About the Mystical Heart: A Spiritual Symbol ...

The Mystical Heart is a 14K gold handcrafted rendition of ancient Kabbalistic teachings about the heart. The shape of the heart is formed by two identical lamed’s–a

Bo: A Slap in the Face

After Moses informed Pharaoh of

There are no holidays in