Ladies and gentlemen! Does history repeat itself?

There is no doubt that throughout the generations similar situations have occurred and certain stereotypes have reappeared. If we look hard enough, we would be able to find a suitable counterpart from history to fit our own times, as Ecclesiastes states: “What has been is what will be, and what has been done is what will be done, and there is nothing new under the sun.” That’s why it is so important to learn the lessons that history teaches us, “Remember days of yore.”

But, when we consider ourselves as the individuals who make history, our first thought is that we have never existed before. There may have been people who were similar to us, whether more or less successful (probably more…), but we are all unique. Every individual perceives their own personality as unique, and their self-image is that they are one-of-a-kind, and this is true for any human being who ever stepped foot on earth.

This is particularly obvious when it comes to spectacular individuals who appear in the sky of history like a shooting star that can never be reproduced. All rights are reserved. That’s how it is with Moses, for example. Since he passed away from the world, on the seventh day of Adar, thousands of years ago, there has never been, nor will there ever be anyone like him, as the Torah testifies, “There will never rise another prophet in the Jewish People like Moses.” We can definitely name individuals who are reminiscent of Moses to a certain extent―as in the well-known phrase that refers to Maimonides, Rabbi Moses ben Maimon, “From Moses until Moses none rose like Moses”―similar, but not identical.

In other words, the main connection and similarity between the people who lived in the past and our present day is only from a collective perspective, as in the concept in Jewish law that, “A community never dies.” Nonetheless, individual Jews are constantly changing, and every personality is unique. “A generation goes and a[nother] generation comes, but the land [the community] stands eternally.”

Then the wisdom of Kabbalah comes and challenges these assumptions. There are phenomena that reoccur not only in the macrocosm of Jewish history in general, but also in the microcosm of individual people. There are reincarnations. Just as with Kabbalah in general, this field also reached the peak of its revelation in the teachings of Rabbi Isaac Luria (the Arizal), who accurately described reincarnations since the days of creation until his own time. The Arizal enumerated a complex “genealogy” of souls, in which one figure from the Torah is reincarnated as another in the days of the Prophets, and once again in the time of the sages, and once more in a later era. The details of reincarnations are complex at times, describing which particular part of the soul was reincarnated as another soul, whether just a spark of it or its root, in the prescribed dose or for a limited time etc…

The figure whose soul returns and is reincarnated more than any other is Moses. In fact, the Zohar interprets the abovementioned verse, “A generation goes, and a generation comes,” to mean that one generation goes and the same generation arrives once again. This refers in particular to Moses, who is reincarnated in every generation anew. Indeed, immediately following the verse, “A generation goes and a generation comes,” we read, “And the sun rises and the sun sets.” Just as the sun that rose today is the very same sun that set yesterday, so too the same generation that passed returns once more. Apparently, the author of Ecclesiastes, King Solomon, in the guise of a skeptic rationalist, actually alludes here to the secret of reincarnation. Indeed, we can read, “What has been is what will be,” (מַה שֶּׁהָיָה הוּא שֶׁיִּהְיֶה) as “who has been is who will be”; and here too, the Kabbalists point out that the initial letters of the first three words spell out “Moses” (מֹשֶה).

The Secret of Reincarnation

What are we supposed to learn from all this?

Let’s first make it clear that the subject of reincarnation is a clear example of a profound Kabbalistic concept that has been adopted by fans of cheap pop-culture pseudo-mysticism for the masses, which widely promotes so-called Kabbalists who take people’s money, but offer nothing in exchange. The biggest danger that arises in this case is developing a warped perception of one’s personality and responsibility (e.g., since my fate is pre-determined, I cannot be held responsible for my actions and their results, because I am not really me).

That’s why it is so important to balance this misconception about reincarnation by introducing its correct context in authentic Kabbalah, through the teachings of the Chassidic movement founded by the Ba’al Shem Tov. According to the Ba'al Shem Tov, souls are reincarnated, but we shouldn’t delve into our previous incarnations, because we should focus on our situation as-is. We only have free-choice within the limits of what we know and perceive, and within those boundaries we take full responsibility for our actions. The secret of reincarnation can explain many obscure events and offer a different perspective on God’s accounting in His world. But, when all’s said and done, I am me and no-one else.

Every Generation has Its Own Interpreters

So, how does knowledge of Moses’ soul’s reincarnation help us?

There is a tendency to “repress” all Jewish giants and heroes into history. Once there were prophets and sages; once there were tzadikim (righteous individuals) and great Jewish men; once there was Divine insight, but nowadays (with a long drawn-out sigh)… We can recruit many sayings of the sages that refer to the “descent of the generations,” such as, “If the first were like angels, then we are like humans. If the first were like humans, then we are like donkeys.” It’s all true, but not so true. The figures who illuminated the past do return to us, even if they have different facial features, in an updated edition that suits our generation according to its style and status, “Every generation has its own interpreters.”

Don’t wallow in nostalgia, singing, “Memories…of the way we were.” Don’t avoid the issue by saying, if I had lived in a different generation, I would have valued the tzadikim, but not in an orphaned generation like ours. On the contrary, if you are skeptical about today’s genuine tzadikim, there is a chance that had you lived in Moses’ time you would have joined Korach and his rebellion! If you only open your eyes, and peel away those layers of cynicism and skepticism, you would believe and be able to see that even today, right here under our noses, there are Jews who are simply tzadikim.

Moses, the Leader of the Generation

But, beyond the faith and the trust that we need to express in Jews, tzadikim and Torah sages, the reincarnation of Moses means that every generation also has a leader-figure. The sages emphasize that every leader in his own generation is a continuation of Moses, the greatest leader of all times:[1]

Moses, of all leaders, is the one who needs to be reincarnated, again and again and again, because his task has not yet been completed. Moses was sent to take the Jewish People out of exile and into redemption, and we are still on the way. Just as every generation participates in rectifying the sin of the Golden Calf and the sin of the Ten Spies, so too, Moses returns to add the unique and essential levels needed by that generation to facilitate complete redemption. This is why Moses’ final incarnation will be when Mashiach completes his work, speedily in our days. Indeed, the Kabbalists say that Mashiach’s soul is that of Moses himself, “The first redeemer is the final redeemer.”

There are many tzadikim, but there is only one leader, he is the “Moses of the generation.” However, the intended leader may also come up against a lack of faith and attentiveness from the people of his generation.

The Suffering but Opening Leader

At the same time that the leader of the generation identifies with the generation and its troubles―and by power of this identification―he also serves as a “channel” through which the unique Torah of that generation is drawn into it from above. The abovementioned quotation relates to Yiftach the Giladi (one of the Judges) as an extreme example of an undistinguished leader. Nonetheless, “Yiftach in his generation was like Moses in his generation.” The name “Yiftach” (יִפְתַח) alludes to the ability of the leader to “open” (לִפְתוֹחַ) that channel. Every genuine Jewish leader has special aid from above to open up and offer the Torah’s viewpoint as it suits that generation, from the inexhaustible treasure trove of the Torah, and through a profound faithfulness to the tradition of generations.

We hope and pray that we will soon merit the completion of all Moses’ incarnations, and the revelation of the special light of the Torah that is saved for Mashiach, “A man whose name is Tzemach [צֶמַח; lit.: ‘a plant’] and from below him [from the generation] he will grow”, a Torah which we can refer to as, “A new Torah will come out of me.” 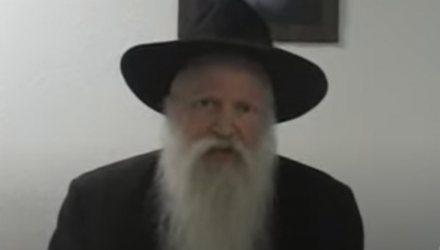 Continuing the Joy From Purim to Pesach with ...

Q: What can I do to rectify the lashon