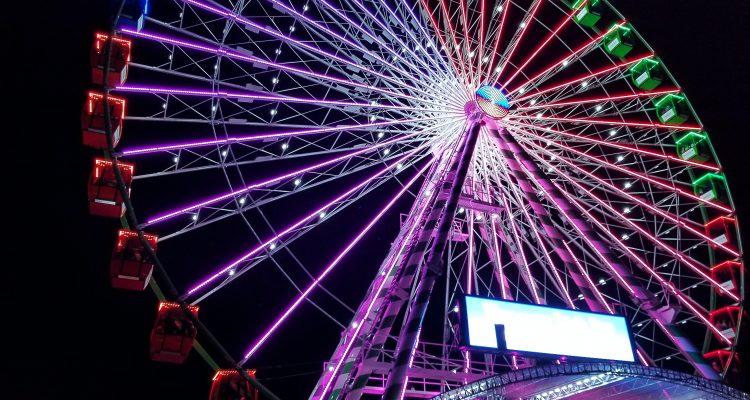 Purim: Getting Off the Ferris Wheel

We can see the year as a big Ferris wheel. We get on the wheel during the month of Nissan, the first month of the year and begin our ascent. Adar is the final month of the year, when the Ferris wheel is at the very bottom of its cycle. At least that is what the evil Haman thought. He cast a lot to determine when to wipe out the Jews and it fell out on the month of Adar. “Perfect!” he surely thought. “Adar is the month when Israel’s mazal is at its low point!”

The Jewish people indeed were at a low point. They were in a deep slumber, perhaps a coma. This is one of the explanations of the verse in the Scroll of Esther, “There is (ישנו “yeshno“) a nation” (Esther 3:8). “ישנו” also means “they were sleeping.” Their heyday is behind them; they are old (ישן “yashan,” also means “sleeping”) and antiquated. Their God is also sleeping, antiquated and irrelevant. They are at the bottom of the wheel. And Haman is at the top, happy and light-hearted.

What happened in the end? The wheel suddenly began to turn and gain speed. Ultimately, Israel was at the top, and Haman had fallen all the way down, with the tremendous (adir) force of the month of Adar. Haman’s lottery (pur) turned into our holiday of Purim.

Getting Off the Wheel

But what happens when the wheel turns again, and we are back on our way down? Is it possible to get off the wheel? Absolutely. We have to take the wheel’s circular velocity and use it as a springboard to leap off the wheel and into a higher place.

The Ferris wheel is our ever-spinning world. It is the cycle of nature, history, and life. The cycle of life includes tension and pleasure. But after a few rounds in the closed circle, we understand that living in nature’s cycle with no horizon for change is slavery to nature. It is the Sin of the Golden Calf (“עגל” “egel,” the same root as “agol” [round]).

In the business world, the stock market is a system of losses and gains. The successful businessman knows how to gain and then identify the opportunity to break the cycle and make his lucrative exit. Purim is our golden opportunity to get off the wheel. As we begin to ascend and our velocity increases, we can break free.

How can we get off the Ferris wheel of life? Where are we supposed to go? We do not have to leave this world. But instead of just continuing to spin around, we will pay close attention to the fact that Someone is turning all the wheels. We are not just spinning through life. There is a Guiding Hand, leading us through all of life’s whirlwinds and storms. We do not need to employ blind fate, but rather, faith in Divine Providence, God’s plan.

The verse in Ezekiel 1:7 states that there are angels with “the foot of a calf (“egel,” same root as “agol,” ’round’).” Angels cannot escape their nature. They are the “regel egel” (foot of the calf) who are accustomed (ragil, same root as regel, ‘foot’) to the circle. Only humans can exit the circle. The numerical value of regel egel equals Purim. Purim is the time to exit our cyclical lifestyles – all the things that we would like to change but continue out of habit (hergel, same root as regel).

If we rearrange the letters of regel egel (רגל עגל) we get גלגל רע (galgal ra, “a bad wheel”). The bad wheel is the cycle of nature, which is unaware of He Who makes it turn. Its oblivion to God brings it down, making it a “bad wheel.” As soon as we see, however, Who is turning the wheel, it becomes a גלגל ער (galgal er, an awake wheel, same letters as galgal ra). We become wide awake to reality and can exit our cyclical existence. Instead of living in a state of slumber, our hearts awaken to God, and we embark on a straight path toward true and complete redemption!

Photo by jim gade on Unsplash

Nature, Miracles, and the War Against Amalek

21st of Adar, 5781 Nature, Miracles, and the War Against Amalek Rabbi Yitzchak Ginsburgh Introduction Today is the yahrzeit of Rebbe Elimelech of Lizhensk who is also

Rebbe Elimelech of Lizhensk, author of the Noam Elimelech,

Rabbi Ginsburgh delves into the revolutionary, transformative aspects of

The Rebbe Rayatz: The Greatest...