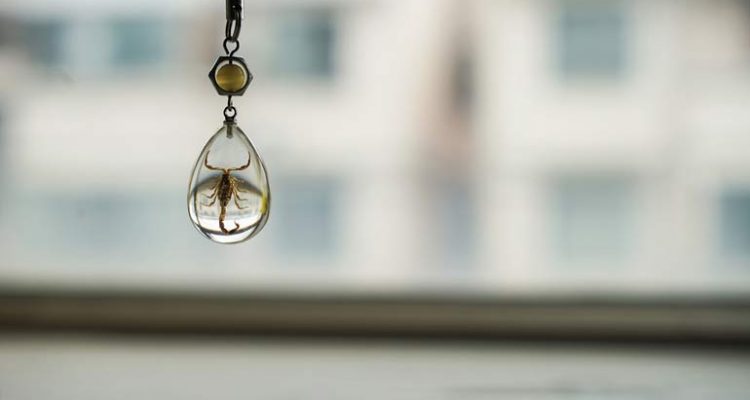 As fall gets into full swing, we don’t want to get chilled. But coldness can also be holy! The mazal of the new month of Cheshvan, which begins on Wednesday, is the scorpion, known for its cold venom. The scorpion does not represent only negative coldness. It also represents positive level-headedness – a messianic characteristic important for the rectification of the entire world.

The month of Cheshvan has begun, and we really are “after the holidays”. The enthusiasm of the month of Tishrei has already begun to melt. It is getting a bit chilly outside – and perhaps in our hearts, as well. The sky has turned cloudy, reflecting our return to mundane reality. The mazal of the month of Cheshvan, the scorpion, doesn’t make a terribly good impression, either. (We do not worship or believe in the astrological signs. But according to Kabbalah, the mazal does reflect something of the essence of the month). We may think that at times like this, the best we can do is to hang on, try to keep warm from the memories of Tishrei and to ‘borrow’ a bit of warmth from the light of the upcoming Chanukah. But as always, the perspective of the inner dimension of the Torah will reveal the positive work that we can do as the chills of the month of Cheshvan set in.

The mazal of the month of Cheshvan is the venomous scorpion. In the Torah, the scorpion generally appears with the snake, as in the verse that describes the “great and awesome desert” as the place of “snakes, saraph (a type of snake) and scorpion…” The pit into which Joseph was thrown by his brothers is also described as being empty, “containing no water”. Our Sages add that while there was no water in the pit, there certainly were snakes and scorpions.

What is the difference between the snake and the scorpion? Our Sages teach that there is a difference between their venoms. The snake’s venom is hot, while the scorpion’s venom is cold. (In Hebrew, the middle letters of the word for scorpion, ‘akrav’, are kuf, reish, which spell kar, ‘cold’). In man’s soul, the snake’s venom is expressed as negative and damaging heat – as ‘boiling blood’ and burning desire for various lusts. On the other hand, the scorpion’s venom is expressed as dangerous coldness – apathy and frostiness toward anything important and holy that enlivens the soul. Now we understand why the chill and overcast of Cheshvan fit the mazal of the scorpion. Sinking into chilly routine, with no warmth or enthusiasm is the very essence of the scorpion’s sting.

What is more dangerous? The snake or the scorpion? On a superficial level, we may think that the fire of lust is more dangerous than apathy and coldness. After all, the fire of lust pushes people into sin and serious error, while coldness simply causes people to perform good deeds by rote, with no vitality or energy. At the very worst, coldness causes people to take a pass on performing good deeds.

In truth, however, the cold venom is more dangerous. Warmth is a sign of life, while cold is death. A person burning with desire is indeed in a dangerous situation, but he has hope. A person sunk in apathy and coldness, however, loses the spark of life.

We can explain this in another way: According to Jewish law, a person standing in prayer when a snake winds itself around his heel is not supposed to stop his prayer. But if he sees a scorpion advancing toward him, he must stop praying and flee. Why? Because the snake does not bite without being provoked. The scorpion, on the other hand, will always sting. When referring to the soul, the burning desire of our evil inclination needs the complicity of his host. When a person is busy with holiness – when he is immersed in prayer – he can simply ignore his evil inclination. On the other hand, the coldness that the scorpion injects into the person filters into his routine – even if he does nothing – and a daily battle is required to save himself from it.

Clearly, just as there are negative and harmful snakes and scorpions, we can also find the holiness in them. Opposite the heat and lust of the evil inclination stand holy heat and enthusiasm – a warm and caring heart, enthusiasm for anything that has to do with holiness – the holy fire of prayer, Torah learning or fulfillment of mitzvot. But is there positive apathy and coldness? One of the descriptions of true Torah scholars is that “their sting is the sting of the scorpion”. When a Torah scholar is forced to be critical and assertive for educational purposes, his “sting” does not stem from a flare of temper, which would cause him to lose his equilibrium. Instead, he acts out of a sense of balance and clear thinking. It is specifically the coldness that allows him to act in a correct manner.

On a deeper level, just as we need enthusiasm and energy for the positive, so we need coldness and apathy for the dizzying temptations of this world. Even despair is a positive trait when it is channeled in the right direction. When a person despairs of imaginary achievements or of the chance to satisfy his endless lusts, he is capable of seriously channeling his energies toward true and eternal acquisitions with equilibrium. (For example, when a person is liberated-despairs of fleeting, superficial experiences while dating, he can truly invest his energies in a stable, deep relationship, establishing a loving home and family). Here, as well, it seems on the surface that the warmth and enthusiasm are preferable. But the inner approach reveals that as long as we have not cooled off from our eagerness for easy, superficial fixes, our eagerness for holiness may also be mixed with a lot of imagination and superficiality.

Beyond the positive snake and scorpion in the soul, these creatures also herald a message of redemption for all. Kabbalah teaches that the numerical value of nachash/snake equals the numerical value of Mashiach/Messiah. In one place in the Bible, Jesse, the father of King David – the father of Mashiach, the son of David – is call nachash/snake. The scorpion has messianic energy, as well. This is alluded to in an expression of the Sages that correlates the Mashiach with the scorpion, saying that both “come with ‘distraction’”. In addition, the numerical value of akrav/scorpion equals Mashiach plus David – and also Ben Yishai/the son of Yishai.

On a deeper level, this reflects two different stages of redemption – or its two different goals. The first stage/goal is the Mashaich the son of Joseph (snake) stage, while the second stage is the Mashiach the son of David (scorpion) stage. First, the snake-Mashiach turns to the Nation of Israel, awakens their hearts to serve God and warms them with enthusiasm to strive for the redemptive destiny – the fulfillment of a full life of Torah, war on world evil and the building of the Holy Temple in Jerusalem. Later, scorpion-Mashiach turns with cool-headed equilibrium to the seventy nations of the world in order to bring them close to service of God. (Akrav/scorpion, is even an acronym for mekarev ayin/brings the ayin, 70 (nations) close).

The ability to influence the nations of the world depends on the Mashiach being cold as ice in his approach toward the world’s culture and its temptations. He must completely reject man’s captivity to the maze of lusts and addictions so prevalent in our surroundings. Only a person who completely shuns foreign cultures and is totally apathetic to their temptations can draw the nations of the world out of them and even extract the spark of human wisdom concealed within them and bring them close to holiness.

On an inner level, the warmth of holiness is still the Mashiach’s personal experience, with which he can infuse his fellow Jews. His internal coldness is actually his emergence from his own personality and holy enthusiasm – and his openness to becoming a tool in the hands of the Creator. Only a person who is bereft of any personal motivation and completely open to Divine inspiration can reach out to all of humanity – including those who are consummately far and different from him – and bring them the tidings of the redemption.

Question: A picture of the

Q: We are Noahides and