Returning to Heaven to Earth: The Message of the 19th of Kislev

Today is Yud Tet Kislev, the 19th day of Kislev. It is the yahrzeit of the Maggid. The second event that happened on this day, which is directly connected with the first, happened 26 years after the passing of the Maggid when his most beloved student, Rabbi Schneur Zalman of Liadi, was released from prison. The spiritual reason he was arrested was that he was revealing so many mystical secrets of the Torah and the prosecuting angels in heaven disputed the permission to disseminate and to reveal these deep lights. The angels claimed that the mundane world was not worthy of all of the light that was being revealed.

The fact that he was released from prison means that Hashem Himself says that not only is it legitimate to reveal these secrets, but that this is exactly what needs to be done to bring about the fulfillment of the purpose of creation with Mashiach. With Mashiach, we have to reveal all of the deepest secrets of the Torah which is what the Alter Rebbe was doing.

We are taught that the first three generation of Chassidus—the Baal Shem Tov, the Maagid, and Alter Rebbe—correspond to the three Patriarchs. The Baal Shem Tov parallels Abraham, the Maggid parallels Isaac, and Rabbi Shneur Zalman of Liadi, the Alter Rebbe parallels Jacob. Just like Isaac, the name of the Maggid’s father was also Abraham. But, what lies at the heart of this comparison?

The Maggid of Mezritch’s foundational teaching is that just as God created the heavens and the earth, the Divine service of the Jewish soul down here on the earth is this upward run through which that which was created and became being returns to nothingness. It is the experience of the infinite being of Hashem because Hashem created the world something from nothing, ex nihilo. The second patriarch, Isaac, to whom the Maggid corresponds, symbolizes the earth running upwards to become part and included and nullified within the heavens.

We then come to the third generation of the patriarchs, Jacob, who is described as the “choice, the most select, of the Patriarchs.” Jacob represents the motion of return—the return below after running upwards. The living beings, every living being in creation runs upward and then returns downward. The run and return we have described originates in Ezekiel’s vision of the Divine Chariot, where he describes, “the holy chayot—the name of a certain type of angels—run and return.” The run and return is described in the Book of Formation (Sefer Yetzirah) with the words: If your heart runs upwards, then return. But, where should you return to? Actually there are three different variants of the answer:

The first three generations of the Chassidic movement serve as a model that describes the relationship all of us have with the heavens and the earth. Each of us starts in the heavens; we are all tzaddikim. But once we depart the heavens, down here on earth, we experience ourselves as being something from nothing. So we aspire to elevate and to go up; we want to leave behind the experience of the ego, the experience of being separate from the heavens so our soul runs upwards. But we do not stay in the heavens. Because the third generation of Chassidut, the generation of the Alter Rebbe, received a psak (a ruling), that our mission is here below, that we must return to the earth. The meaning of his release from prison was that the light belongs down here on earth must be revealed to everyone.

So though the Maggid represents the run up to the heavens, our mission is to descend from heaven to earth, to aspire to reach God’s ultimate oneness, which can only manifest on earth.

First, we learn that we are all part of the heavens. Abraham and the Baal Shem Tov teach us that we are all stars in the sky. The Maggid taught us to return to the heavens, to Abraham. Then, 26 years after the Maggid’s passing, the Alter Rebbe was released from prison. The Maggid called his dearest student, the Alter Rebbe, right before his passing and said that today is our holiday. My passing and your release will be today, 26 years from now, and these are just two stages of the same Divine process. The ultimate purpose of history. Passing, the Maggid went upwards to the heavens. First the soul has to run up to the heavens but at the very peak of its ascent, it has to turn down and to see that it is only through descending into the world that it can truly ascend into God’s ultimate oneness. 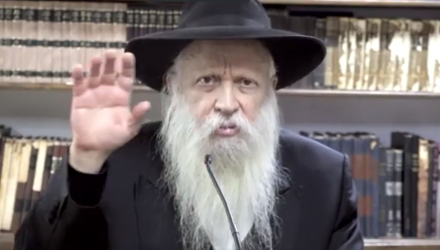 19 Kislev: Between Heaven and Earth

Rabbi Ginsburgh on the founders of Chassidut, the Ba’al Shem Tov, the Magid of Mezritch and the Alter Rebbe of Chabad.

This is the fourth part of a transcript of

The Lubavitcher Rebbe coined the word Ufaratzta (“and you

This is the third part of a transcript of

Q: We are expecting a

Jacob’s response to his