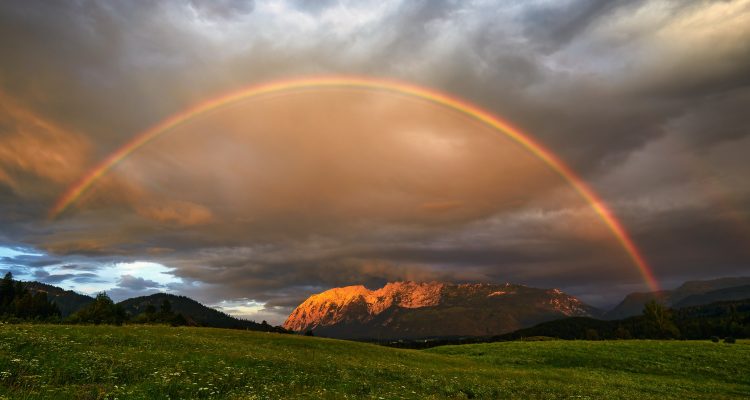 What is a dream? A dream is not necessarily the “movie” we see while we sleep, and it is not necessarily the plans that we weave for our future while awake. A dream is anything that hovers between reality and non-reality—anything that can be dubbed ‘virtual reality.’ When we dream, we experience the dream as if it is literally happening. But when we wake up and attempt to “catch” the dream and experience it, it slips into non-existence. Does virtual reality have any real substance? Is it necessarily disconnected from reality?

Somewhere Over the Rainbow

A good example of virtual-dreamlike reality is hiding in plain sight. The celestial sign or mazal of the month of Kislev is the bow (keshet). (This is the place to reiterate that we do not believe in astrology nor in the influence of the stars over people. The symbolic mazal of each month, however, can illuminate the spiritual work that we should be doing in each particular month of the year).

One of the manifestations of the sign of the bow can be found in the rainbow. This natural phenomenon is a good example of reality that is plain to see, beautiful and colorful, yet has no substance that we can feel or grasp with our hands. But despite the fact that a rainbow is a type of virtual reality, it has a great deal of significance in our tangible reality. The rainbow is a symbol and reminder of the covenant that God made with Noah and humanity after the flood—a promise that God would never again destroy the world. It is important to note that according to some opinions, this covenant was made on the New Moon of Kislev, just a few days after the end of the flood on the 27th of Cheshvan.

What can the rainbow teach us about the connection between the virtual world of dreams and substantive reality?

Apart from referring to a rainbow, the Hebrew word for bow, Keshet, can also refer to the archer’s bow that shoots arrows.

In the holy Zohar, the foundational book of Kabbalah, the archer shooting his bow is one of the metaphors used to describe prayer. In general, in the Zohar, prayer is likened to war, for while we pray, a battle is taking place between the good and bad in the soul. True, this battle between the good and evil inclinations is actually being fought out all day. But during the rest of the day, the battle is fought against our will. Prayer, however, is self-initiated and therefore it is the time during which we strengthen the good within us so that it will overpower our bad side and weaken it. When we triumph during prayer, it leaves its mark on the rest of the day. If we overcome our evil inclination during prayer, it will be easier for us to do the right things and to overcome its temptations all day long.

The Zohar expands upon the metaphor of prayer as war and notes that there are a number of weapons with which war is waged: bow and arrow, sword, spear, etc. Chassidut explains that the use of each of these weapons corresponds to different strategies used to overcome the evil inclination in our virtual war with it during prayer. The two most important are fighting with a sword—used for face-to-face combat against an enemy—and fighting with a bow and arrows—used for shooting a distant enemy, who is sometimes so far away that he cannot be seen. The arrows are shot in the enemy’s general direction, in hopes of hitting the mark.

Likewise, in the ‘soul war’ that is waged while we pray, the fighting with the sword is waged against the evil that is evident and clearly present in the soul. These are the negative proclivities of which we are aware. Fighting with a bow is waged against the concealed evil in the soul. It is used to try and rid ourselves of negative traits that are hidden in our subconscious, exerting their evil influence, and preventing our progress, while all the while, we are unable to identify them. We shoot our arrows—the words of our prayer—in the general direction of this unconscious evil, in the hope that they will hit the mark and neutralize them.

We described prayer as the process of shooting arrows at the soul’s unconscious evil. Shooting arrows at the unconscious source of dreams is a sort of psychoanalysis that attempts to identify—from within the glimpses of the dream—the points in the soul’s unconsciousness that need to be rectified. Unlike psychoanalysis and the array of psychological methods it has spawned, Jewish psychology does not seek to delve into the unconscious. Instead, it attempts to assess it and identify the evil within it. We can liken this to a person standing with two legs firmly planted in the realm of consciousness, shooting arrows into the unconscious. We have to keep our feet out of our unconscious and not merge with it. We have to rectify its negative points so that we can become better people.

The bow is thus not only an image of shooting arrows from the conscious into the unconscious. We can also switch the arrow’s direction and imagine it being shot from the concealed and inaccessible into tangible consciousness.

Originally, Judaism does not view dreams only as a tool to conduct a deep soul-analysis. The quest to interpret the meaning of the dream is primarily meant to identify the prophetic statement made by the dream regarding tangible reality. The sages teach that “all the (interpretations) of the dream follow the mouth.” In other words, the effect of the dream on reality depends upon the interpretation that we give it. Virtual reality is fluid and evasive, but our interpretation stabilizes it and opens the door to transforming it into reality.

We can depict the bow as the tool that allows us to shoot arrows from virtual reality into tangible reality—from the dream to real life. The sleep that is the sense of the month of Kislev is not an escape from reality into a dream world. Instead, it affords us the opportunity to dream in a manner that will allow us to realize the dream and by means of the dream—to influence reality. This, for example, was the power of the Hasmoneans, whose successful war together with its miracles we celebrate on Chanukah, at the end of the month of Kislev. Their ability to face off against the world superpower of their time stemmed from the power of their vision-dream. While a dream is nothing more than virtual reality, it makes it possible for a person to act in reality by the light of his dream—to shoot arrows from his vision into reality in order to rectify and change it.

Kislev is the time to dream—and watch as dreams do come true!