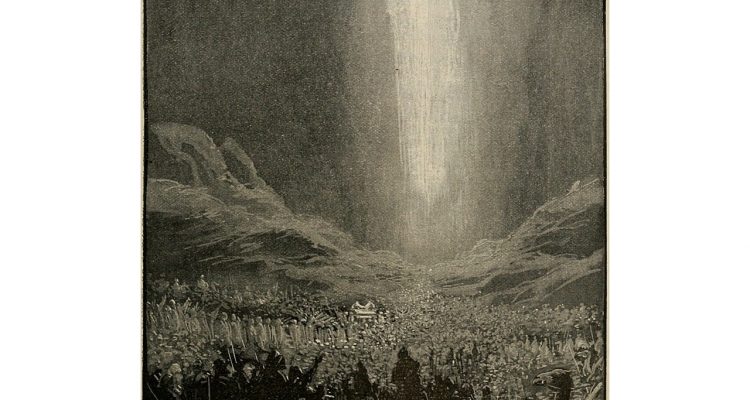 Nevertheless, this explanation still leaves us wondering. After all, the Pillar of Fire is not mentioned here at all (and not in the previous verses, either). This is a case in which the verse beckons us to dig deeper and reveal its inner dimension…The deep secret is that the verse can be understood as is: The darkness illuminated the night! What does that mean?

When G-d created the world, He outlined boundaries: “And G-d called the light ‘day’, and the darkness He called ‘night’.” The light illuminates the day and the darkness darkens the night. But at the Splitting of the Sea, the boundaries are erased: The sea becomes dry land and we can also say that the boundaries of the dimension of time were annulled – especially during the Song at the Sea, which projects into the future, “Az yashir Moshe”, “Then Moses will sing.” (This is the Torah source for the Resurrection of the Dead). At the Splitting of the Sea, day and night become one and darkness, itself, illuminates.

A central pair of concepts in the inner dimension of the Torah is ‘Lights and Vessels’. From a certain perspective, the vessel is darkness in relation to the light. For example, Torah and mitzvot are relatively lights and vessels. We feel the Divine light in the Torah, while the performance of the physical mitzvah is the vessel – and we do not necessarily see in it revealed light. Nevertheless, it is specifically the dark vessel that has a very deep source. Ultimately, the light within the darkness will be revealed and the darkness will illuminate reality.