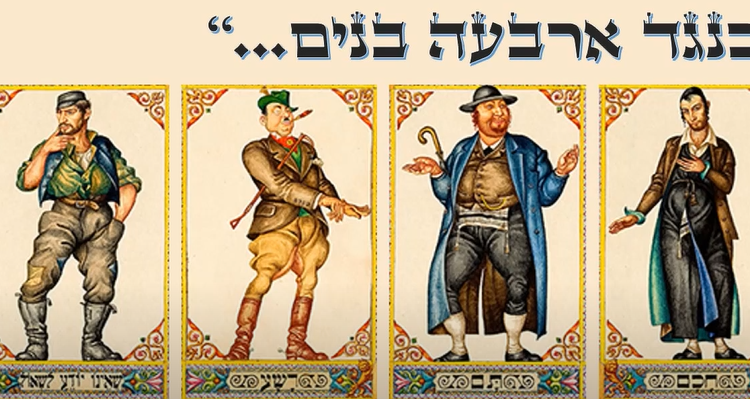 When performing the mitzvah of, “You shall tell your son on that day”—the mitzvah that prompts us to sit together on the Seder night and retell the story of the Exodus from Egypt—the father must hone his message so that it will enter the hearts of all four sons described in the Haggadah. Each son asks his question in a different style, as it wells up from a different place in his psyche. In Hebrew, the word for question does not refer only to a query. It also means a wish or desire.[1] The Four Sons of the Seder are expressing the depths of their souls with their questions. The father must open his own heart and receive their questions with sensitivity so that he can truly understand them both on the intellectual plane and connect to the existential stance concealed behind them.  And then he must answer each of his children accordingly.

The wise son asks abstract, intellectual questions. Behind them lies an apprehension from the threats abounding in our material reality. The wise son is also requesting that his father guide him out of his abstract, spiritual world and into action to rectify the lower worlds.

The tam, the earnest/simpleton son expresses general wonder. Behind it is a desire for direct, simple guidance appropriate for him. He wants his father to help him negotiate the world, which is always full of surprises for him.

The wicked son asks with insolence, “What is this service to you?” Behind his question, lies an aspiration for others to recognize his personal reality. More deeply, his question expresses his need to belong. He is asking his father to help him emerge from his egocentric, lonely, and conflicted existence and connect to the Congregation of Israel and its supernal source.

But what is concealed behind the silence of the son who does not know how to ask questions?

To understand the son who does not know how to ask, we need to place him in context. The Arizal explains that the son who does not know how to ask belongs to the World of Formation. This is the place of the beinoni, the intermediate person of the Tanya, who is always in the throes of battle between his good and evil inclinations—his animal and Divine souls. The Alter Rebbe says that the “state of the beinoni is the state of every person.”[2] In that case, we are all the son who does not know how to ask. A person who attempts to avoid conflict in his inner battle between his two inclinations is liable to enter a state of paralysis. He knows the limits of his intellect and therefore does not allow himself to ask intellectual questions out of a latent fear that a new insight will also require him to see things in a new light and will require him to commit to new things). On the other hand, he fears that all his desires are nothing more than an expression of his evil inclination. Deep down, he doesn’t even know what he truly wants.

In our generation, the beinoni is also the ba’al teshuvah, the returnee to religious observance, who does not know where to begin to ask. He wants to come closer to God, but he doesn’t even know what he is missing, what he should be searching for, and what he needs to rectify.

The Haggadah directs us to “open up” this child who does not know how to ask questions. The hardening of the heart, the apathy, or the confusion that result in a lack of questions leave him stuck in his place.  The entire Exodus from Egypt depends upon a process of questions and answers. Even the insolent question of the wicked son is better than no question at all. The father has to open his son’s heart, arouse his interest and his willingness to ask questions. After he has managed to arouse him to ask, he will be able to answer each specific question.

From a narrow perspective, all four sons are inter-included in each of them. This can be seen by noting that the Haggadah enumerates the sons as: one who is wise, one who is wicked, one who is earnest, and one who does not know how to ask. The value of the word “one” (אֶחָד) is 13 and 4 times “one” equals 52, the value of “son” (בֵּן). Four sons in each son. Four sons in every one of us. From a wider perspective, the four sons reflect all of humanity—from the wise and sincerely earnest to the wicked and the apathetic. With the questions and answers of the Seder (Seder means ‘order’) night, we are creating a new world order in our souls and in the entire world.