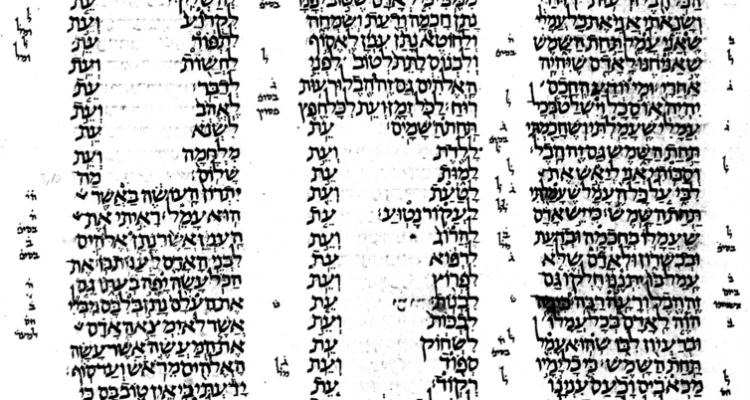 The Book of Gatherings

Ecclesiastes is one of the Five books of the Bible described as “scrolls.” The sages associate Ecclesiastes with the festival of Sukkot, and in many congregations, it is read on the Shabbat of Sukkot. Its name derives from the pen name assumed by its author, King Solomon, who refers to himself by this name in the first verse of the book: “The words of Kohelet, the son of David, king in Jerusalem.” The English name, “Ecclesiastes,” is an ancient Greek translation of Kohelet which literally means “to gather.”

Commenting on the first verse of Ecclesiastes, Rashi writes:

Let us now see how both reasons that Rashi gives for the name Kohelet connect this book with the festival of Sukkot.

The Festival of Gathering

However, while in his commentary on Ecclesiastes Rashi writes that Agur ben Ya’ke stored all the wisdom, in his commentary on the verse that mentions this name in Proverbs,[3] he writes that “he stored the understanding.” What is the reason for the difference between Rashi’s two comments? Additionally, why would Agur ben Ya’ke later spit out the wisdom that he had gathered? To extend Rashi’s metaphor: what is the difference between wisdom that can be digested, and wisdom that must be spat out?

In Kabbalah, wisdom and understanding are the two intellectual sefirot about which the Zohar says: “They are like a couple that never parts.” Kabbalah uses holographic (or fractal) thought. What this means is that as you analyze something using Kabbalistic concepts, the same patterns emerge again and again, each time with a little bit of a variation. One of the most basic such holographic repetitions revealed and formulated by the holy Arizal involves the grouping of the sefirot into partzufim (literally, “personas”), and then the subsequent grouping of the partzufim into olamot (literally, “worlds”). Thus, there are in principle 10 sefirot in every partzuf, and 12 central partzufim in every olam.[4]

One way to illustrate this is to consider the difference between wisdom that is acquired from experience[5] and wisdom that is acquired through systematic study of a topic. A person with experience may know how to solve certain problems that he has come across already (especially if he has a good memory) but will experience great difficulty when faced by a completely new challenge. In contradistinction, the person who has studied the theory and foundations of a topic may be able to quickly apply his essential knowledge to solve any number of new problems.

Similarly, a software and computer engineer can quickly apply her theoretical training in mathematics, programming languages, operating systems, error-correcting codes, integrated circuits, communications protocols, etc. to understand and master any new computer program or technology that she encounters. But even a very experienced power-user never fully understands a technology—only how to use it. The computer engineer has studied the essential understanding and wisdom (Abba and Imma) while the power-user has learned only from applied experience (Yash’sut).

This difference between Yash’sut and Abba and Imma is even more pronounced in the context of Torah study. To be applicable in all situations, one must study the essence of the Torah’s wisdom, Kabbalah, and even more so, Chassidut. Without Kabbalah and Chassidut, a great deal of Torah knowledge cannot be understood as more than just a particular instance, a special case. This is the main reason that it is related in the name of the Gaon of Vilna, that one who does not know the inner wisdom of the Torah should not act as a possek (halachic authority).

Gathering and spitting out

Equipped with the preceding explanation, let us look at Rashi’s commentary once more. In Kohelet, Rashi writes that Agur ben Ya’ke gathered and stored “all the wisdom” (כָּל הַחָכְמָה). The additional “all” refers in Kabbalah to the sefirah of foundation.[6] Thus, in Kabbalistic parlance, Rashi is referring to the foundation of wisdom, which is the main part of the wisdom of Aba around which the partzuf of Yisra’el Saba is built. It follows therefore that in Proverbs, when Rashi describes Agur as having gathered and stored all the understanding, he means understanding as it is in the partzuf of Tevunah.

Thus, we find that Agur ben Ya’ke embodied the quality described in the Book of Formation (Sefer Yetzirah) as “be wise in understanding”[7] (חָכָם בְּבִינָה), which is the unification of Yisra’el Saba with Tevunah.[8]

Indeed, the unification of Yisra’el Saba with Tevunah is neither an immutable nor a permanent state of unification, and as we mentioned above it is susceptible to circumstances. Only the unification of Aba and Ima, which captures the essence of wisdom, creates a permanent state of intellectual enlightenment, which cannot be abjured. About this last state, the verse says: “they shall die [all other states of intellect], but not in wisdom”[9] (יָמוּתוּ וְלֹא בְּחָכְמָה). This is the reason that Agur ben Ya’ke ultimately “spat out” his wisdom. In Ecclesiastes he writes about the impermanence of his wisdom: “I said I would be wise—yet it remained far from me.” The sages write that “it” refers to the secret of the Red Heifer, which was revealed only to Moshe Rabbeinu, the embodiment of the essence of wisdom, who achieved the unification of higher wisdom with the higher understanding.

The Gatherings of Moshe and King Solomon

The second reason noted by Rashi is very clearly related to the festival of Sukkot, because the event of Hakhel, which literally means “the gathering,” was held once every seven years during Sukkot.[10] We find that Moshe Rabbeinu also held Torah “gatherings,” once every seven days, on the Shabbat. Of Moshe’s gatherings the Torah says “Moshe gathered….”[11] (וַיַּקְהֵל מֹשֶׁה). The numerical value of these two words is 496, or the triangular value of 31 (which we write in shorthand as r31), the sum of integers from 1 to 31.[12] The Bible describes King Solomon’s gathering with a similar phrase, “Then Solomon gathered…”[13] (אָז יַקְהֵל שְׁלֹמֹה), and the numerical value of these three words is 528, also a triangular number, in this case r32.

There is a simple mathematical equality stating that:

Interpreted graphically, this equality says that the sum of two consecutive triangular numbers [the triangles of n and n ┴ 1] is equal to the value of (n ┴ 1) squared. This is one of the most fundamental properties of figurate numbers—an area of mathematics that plays a prominent role in the numerical analysis of Torah.[14]

But 32 is the numerical value of the Hebrew word for “heart” (לֵב). Both wisdom and understanding relate to the heart. In another verse in Ecclesiastes, King Solomon says: “My heart has seen much wisdom.”[15] And from the introduction to Tikkunei Zohar we learn that “understanding is the heart.”

All is Revealed in the Sukkah

The word “sukkah” itself stems from the word meaning “to perceive,” a verb that is used particularly in relation to ru’ach hakodesh (the Divine Spirit of Holiness).[17] The prophet Jonah (whose story we read at the highpoint of Yom Kippur) received his power of prophecy during the joyful celebration of Sukkot; he merited to perceive ru’ach hakodesh on Sukkot. The Talmudic phrase “to perceive ru’ach hakodesh” does not only refer to the prophet’s internal perception but can also mean “to perceive the potential of ru’ach hakodesh,” referring to the potential that others have for perceiving ru’ach hakodesh. Sukkot is the time to become aware of the latent power of ru’ach hakodesh that manifests from the innermost point of wisdom in each and every Jewish heart. Chassidut teaches that the inner quality of wisdom is selflessness—this is the quality most needed in order to fulfill the sages’ statement that all of Israel are worthy of sitting together under a single sukkah, a sukkah of peace (סוּכַּת שָׁלוֹם).

On Rosh Hashanah, the Almighty is said to survey all, at once, but the results of this survey are kept hidden in the concealed world, the subject of the verse “the hidden is to Havayah our God.”[18] But that same survey is revealed like a clear day during the festival of Sukkot.[19]

Thus every Jew can merit to see the entire Jewish people as one, sitting under one Sukkah—“together all the tribes of Israel.”[20] When every Jew attains a state of self-nullification, which is the experiential equivalent to obtaining permanent wisdom and understanding, we can see how the Talmudic dictum “All of Israel are worthy of sitting under [the roof of] a single sukkah” becomes possible. Sukkot is the time when we all gather as one, as the students of Moshe and King Solomon.

[2]. In our Hebrew volume Tom Va’da’at, we explain that the summer months are the months specifically related to our toil as Jews over the wisdom of the Torah, whereas the winter months are shared universally by all people in physical toil.

[6]. As in the seminal verse describing the sefirot: “Yours God is the greatness and the might and the beauty and the eternity and the thanksgiving; for [over] all in the heavens and the earth, Yours is the sovereignty” (1 Chronicles 29:11). The words “for all in the heavens and the earth” (כִּי כֹל בַּשָּׁמַיִם וּבָאָרֶץ) refer to the sefirah of foundation. In fact, the value of the words “for all” (כִּי כָּל) is the same as “foundation” (יְסוֹד).

[8]. The full idiom in the Book of Formation is “Understand wisdom and be wise in understanding” (הַבֵּן בְּחָכְמָה וְחָכָם בְּבִינָה). The first part, “Understand wisdom” refers to the unification of Abba and Imma.

[16]. Indeed, as we saw in note 8, “understand wisdom and be wise in understanding” come together as one!

[19]. By corollary, it would seem that the best time to conduct surveys (in order to get revealed, i.e., easily interpretable, results) is Sukkot.