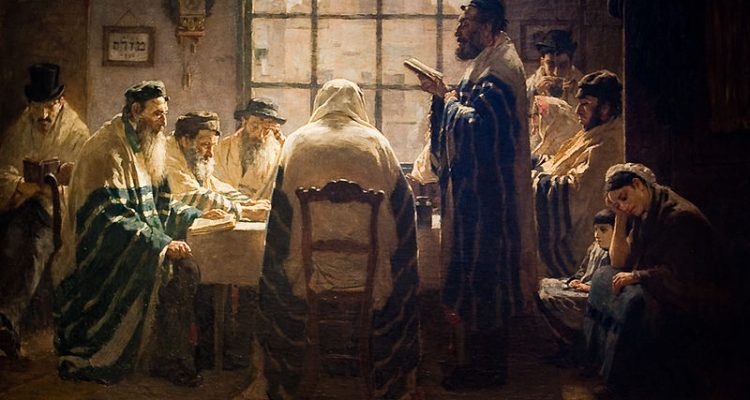 Handling Mystical Experiences: The Shofar in the Maggid’s Synagogue

The Shofar Blower and the Reader

How many people does it take to blow the shofar on Rosh Hashanah? Well, actually, two! First, of course, there is the ba’al teki’ah, the one who blows the shofar. But assisting him is the person known as the “reader.” His job is to call out the sounds of the shofar in the correct order so that the one blowing the shofar does not make a mistake.[1]

Of all his righteous disciples, the Maggid of Mezritch’s, the Ba’al Shem Tov’s successor, chose Rebbe Menachem Mendel of Vitebsk to be the reader in his Beit Midrash on Rosh Hashanah. Blowing the shofar on Rosh Hashanah is in many ways the height of our Divine service throughout the year. This is because as the past year ends with the sundown of its final day, the revelation of God that sustained the world for the past year retreats to its source, and the world is left in darkness. It is only with the blowing of the shofar, the next morning, on the first day of the new year, that a new light of God’s revelation is drawn down into reality, illuminating and setting the stage for the year to come.

In the Maggid’s Beit Midrash, the Maggid himself was the one who blew the shofar; it would be he who would draw the new light of revelation down into reality. And he chose Rebbe Mendele of Vitebsk to be the reader.

We should ask, why is a reader necessary at all? What role does he play? First, we must be aware that there is a difference between the reader’s actions according to most and how he is required to act according to Chabad. By most congregations, the reader vocally calls out the names of the shofar blasts. Everyone, not just the person blowing the shofar, can hear him declare: “Teki’ah… Shevarim… Teru’ah… etc.” But in Chabad, nothing should accompany the sound of the shofar. If the reader is heard calling out loud, he causes excitement in the congregants. But the Chabad reasoning is that the excitement and the movement of our hearts should result from the shofar blast and not from the declaration of the next sound that will be heard.

Nonetheless, the reader in Chabad does play an important role. He silently guides the one blowing the shofar by pointing with his finger at the appropriate sound to be made as it is printed in the machzor (the High Holiday prayer book). The Arizal explains that the “finger” is the secret of the sefirah of knowledge (da’at), as the numerical value of “finger” (אֶצְבַּע) is equivalent to the yud-filling of the holy Name that corresponds with knowledge (אלף הי ויו הי).

Returning to the Maggid’s Beit Midrash: Rebbe Mendel of Vitebsk was able to handle the tremendous mystical experience of being the reader for his master, the Maggid, through his strong and wide sefirah of knowledge, which helped him keep his presence of mind throughout the order of the shofar blasts. It is well-known that after the Maggid’s passing, the Alter Rebbe of Chabad took Rebbe Mendele of Vitebsk as his master and based much of his method on the latter’s teachings. We will now better understand this choice.

“Idlers” in the Maggid’s Court

Not everyone in the Maggid’s court was able to handle the duty of being the reader with the same composure as Rebbe Mendele of Vitebsk. When this next anecdote from the Maggid of Mezritch’s Beit Midrash is told, it is usually stressed that Reb Mendele of Vitebsk was still a young man when it happened. Later, when he was older, he was chosen by the Maggid to guide the other disciples. The Alter Rebbe arrived in Mezritch only during the Maggid’s final eight years of leadership, therefore, this anecdote may have happened some time before the Alter Rebbe was there.

What caused Rabbi Levi Yitzchak to faint? Well, the kabbalistic intentions of the shofar write that the sound of the shofar called teki’ah corresponds to Abraham, the shevarim correspond to Isaac, and the teru’ah corresponds to Jacob. But in the Maggid’s presence, these were not just “intentions” (kavanot), these were mystical experiences. When he pointed at “teki’ah,” Rabbi Levi Yitzchak saw Abraham the patriarch. He could not contain the experience and fainted.

Is it a good thing to faint because of a mystical experience? It might be a problem and it might indicate something positive. But if someone here would suddenly faint, it would indicate that his mind does not control his heart. The Zohar says that the mind should control the heart. This is the very foundation of the intellectual path of Chabad—that even when the heart is burning for God, the mind must still control the heart.

In any case, what did the Maggid say after this happened? He somewhat chastised Rabbi Levi Yitzchak telling him: “You are not like your friend [Rebbe Mendele of Vitebsk], because every time that he points at the “teki’ah,” he sees Abraham the patriarch and is not excited, while you pointed at it just once, saw Abraham, and immediately fainted. You are what they call an idler (בַּטְלָן), the type that the Talmud refers to.[2] And one may not reside in a city that has less than ten idlers.”[3]

There was another “idler” among the Maggid’s disciples—the Choizeh (Seer) of Lublin. His story did not happen on Rosh Hashanah. Rather, the Maggid prayed the entire service alone in his room every morning. Only when he was near the end, would he call a minyan (quorum) of his disciples into his room to say Ein Kelokeinu (“There is none like our God”) with him. It was only towards the end of the Maggid’s life that the Choizeh came to study from him. On the first occasion when he too was called upon to enter the Maggid’s room with the limited quorum, just as they began reciting Ein Kelokeinu, the Choizeh fainted because of the revelations of Godliness in that room. So, he too was known as an “idler,” one who can’t hold his composure. He saw things—undoubtedly, they were great mystical revelations—but he did not have enough presence of mind because his sefirah of knowledge was not strong and wide enough to contain the experience.

The Mind that Controls the Heart

The sefirah of knowledge is identified with the posterior part of the brain. It has the capacity to restrain the individual even during mystical experiences that originate around him or from within. Even as a young man, when Rebbe Mendele would “read” (i.e., point at) the sounds of the shofar for the Maggid, the intentions came to life and Abraham, Isaac, and Jacob actually appeared before him. Still, he already had a very strong sefirah of knowledge and would therefore remain composed. Where the other disciples of the Maggid of Mezritch fainted, he remained himself, controlling the heart’s experience with his mind. This gives us a hint into why the Alter Rebbe ultimately chose him as his master as he was destined to develop the way of Chabad—the way of “the mind controlling the heart.” At the same time, the other holy and great disciples of the Maggid were guided more by their heartfelt experiences.

[1]. See the first article in this issue for more on the order of the blasts.