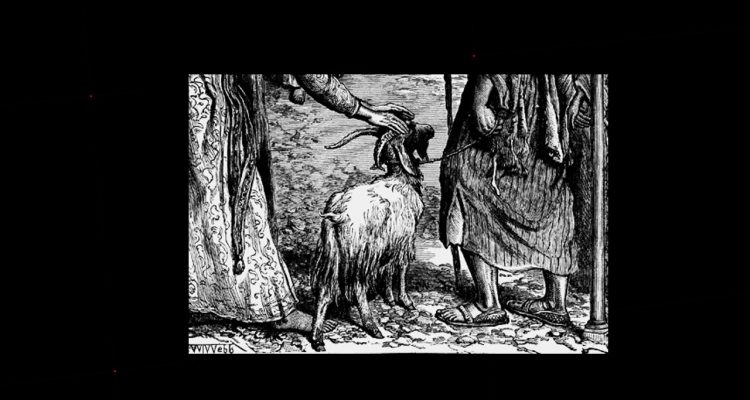 The Yom Kippur Scapegoat: Throwing a Bone to Evil?

The Strange Goat that is not a Sacrifice

One of the unique components of the service in the Temple on Yom Kippur (written in the Torah portion of Acharei Mot[1]) is the scapegoat, the goat that is sent out to the wilderness. If all the sacrifices seem to be a bit removed from our current reality, the scapegoat seems uniquely odd and especially dubious. And in fact, the scapegoat is unique in the world of the Temple and the sacrifices.

First, all the other sacrifices are brought to the Temple and from there, we elevate them “before God.” The scapegoat, conversely, exits the Temple to the desert. This is uncomfortably reminiscent of the prohibition of slaughtering a sacrifice outside the Temple. Second, all the sacrifices are brought before God on the altar, while this goat is sent out into the desert, to a strange death in the wilderness. Not one of the rituals associated with the regular sacrifices is performed. (Slaughter, receipt of the blood, sprinkling of the blood and consumption by fire), and hence it was ritually permissible to send the goat with an Israelite and not strictly a Kohen. (In the Jerusalem Talmud it says that the goat did not always die, and sometimes it would flee to the desert).

The Ibn Ezra point out quite clearly: “The (goat) that is sent out is not a sacrifice.”[2] But if this goat is not a sacrifice, what is it? And how is it that the primary atonement on the holy day of Yom Kippur is contingent upon, “And the goat shall bear upon him all their iniquities unto a land which is cut off”![3]

This is even more eyebrow-raising when we note that the ritual with the goat is quite similar to the rituals performed in idol worship, as described at the end of the Torah portion of Acharei Mot: “And they shall no more sacrifice their sacrifices unto the satyrs, after whom they go astray. “[4] The scapegoat ritual makes it looks like we are offering a sacrifice to some demonic satyr that lives in the desert… The non-Jews have always persecuted and ridiculed the Jews over the scapegoat. The sages describe it as one of the three laws that “the evil inclination attempts to awaken one’s reluctance to fulfill them and the nations of the world also voice their skepticism about them.[5]” (The other two are the prohibition against wearing sha’atnez and the red heifer).

A Gift and Bribe from the King to His Servant

What then, is the secret of this strange goat? The famous Biblical commentator, Rabbi Abraham Ibn Ezra began to reveal the secret with hints and the Ramban continued to solve the puzzle and to explain it more expansively, writing about himself, “And I am the peddler (talebearer), revealing his (the Ibn Ezra’s) secret[6]” (alluding to the verse in Proverbs 11:13, “He who goes as a talebearer reveals secrets”).

In general terms, the Ramban explains that the scapegoat is a gift from God to “the minister who rules in the places of desolation.” In the words of the Midrash that he brings, “therefore, they would give him (the force of evil, who is appointed to rule over evil) a bribe on Yom Kippur” so that ultimately, he would also recount Israel’s merits.” Hence, the Ramban explains, the scapegoat is first set before God and his fate is determined by lot (which is also determined by God) – to show that we are not worshipping the “other side,” but rather, fulfilling God’s will, Who is manifesting as a king who gives a reward to his servant.

Even with this explanation, the scapegoat remains a highly unusual phenomenon within the system of statutes and laws to which we are accustomed on a simple level. It certainly does not go down well with those who attempt to understand the Torah strictly from a ‘normal and rational’ aspect and flee from any hint of ‘Torah secrets’ (certainly the scapegoat will atone for them, as well). Nonetheless, the heart desires to understand what it means to give a bribe to evil – and specifically on the holiest day of the year.

Throw him a Bone

Let us take another step forward, in the footsteps of the Chassidic masters, who brought the concepts hidden in the secrets of Torah down to our level and translated them for us. With their explanations, these secrets do not only refer to lofty spheres where ministers on-high and angels clash, but also as representing truths – simple yet deep – in man’s soul. In this manner, they attain practical significance in every person’s Divine service.

In one of the teachings of the Ba’al Shem Tov it is written[7]:

In other words, first we must admit that we have sin within us, concealed inside even when we sincerely perform a mitzvah! This is also the primary service of Yom Kippur (in the Temple and in every place) – to confess and admit that we have sin within us, as we repeat and specify throughout the holy day. It is not good to ignore the existence of evil inside us and deny it, for eventually it will meet up with us and show us its great strength. If we conduct ourselves with lowliness, however, and admit that we also have parts inside us that belong to the evil side, then the evil inclination “leaves him and goes away.”

To understand this on a practical level, we will explain the Ba’al Shem Tov’s advice as follows: If, for instance, a person wishes to wake up at midnight to serve God with Torah study and prayer, it is not recommended for him to say to himself, “I am going to overcome my sleepy nature and completely break my evil inclination.” He will generally have more success if he says to himself, “I will get up and drink a cup of my favorite coffee. And then, while I am enjoying the coffee, I will also learn some Torah.” This is how to “throw a bone” to the evil inclination, as if we say to it, “You exist, so take this portion.” This allows us to free ourselves of its grip and push it into a far corner where it will bother us no longer.

Sending the Evil Inclination to Desolation

This advice can be a wondrous explanation for the “bribery” of the other-side on Yom Kippur. That evil side, the “minister who rules over places of desolation” is not only outside, in the desert. He dwells inside us, “he is the Satan, he is the evil inclination,[9]” who sits “between the two keys of the heart.[10]” On Yom Kippur, when we desire to be pure and holy and atone for our sins, we must not deny the existence of this evil. Instead, we should give it its place – not as subservience to it, Heaven forbid – but from a place of acknowledgment that God also “creates darkness” and He has a servant whose role is to tempt us. We confess that as human beings, we live with this shortcoming.

After we acknowledge the existence of evil and bring it up into our consciousness from the depths of our souls, we can say to that brazen goat: Yes, you exist, you butt and kick – but your place is not with me here. Go to the wilderness, outside settled areas, that is your natural habitat. Go to the desolate place and leave me alone!

It is only on Yom Kippur that we can really do this – we can dig deep and reveal all the evil inside us, and send it away – leaving us pure. The Mishna describes this process as follows: “A string of red wool was tied to the entrance to the chamber, and when the scapegoat would reach the desert, it would turn white, as it says, ‘If your sins will be red, they will whiten like snow.’” [11]

We will end with a Chassidic saying that says it all in a few short words: The not-good (evil inclination) we all have. The scapegoat was a service in the Temple. As soon as a person is created, he has the not-good inside him. We must send him out to the wilderness.”[12]

May it be God’s will that we will have the merit to throw all the not-good to the wilderness and throw the scapegoat – on the most practical level – to the desolation, together with all the explanations.