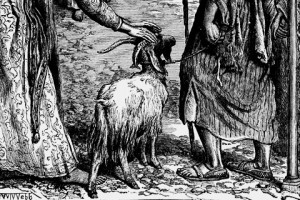 In the Torah there is an emphasis on the relationship between the Yom Kippur service in the Temple and the death of Aaron’s two sons, Nadav and Avihu. This begins with the fact that the Yom Kippur service appears in the Torah portion of Acharei Mot, which begins with their death. Apparently, the Yom Kippur sacrifices of two goats—one of which is for God and the other is sent to Azazel—also allude to Aaron’s two sons. Nadav and Avihu erred with an outburst that did not respect the limits, which is inappropriate audacity. The goat (עֵז) represents audacity (עַזוּת), especially youthful audacity (represented by the fact that the sacrifice was a kid goat). The term “Azazel” (עֲזָאזֵל) is also derived from the same root. Relating to Nadav and Avihu’s act, the verse states, “And they offered before God a foreign fire that they were not commanded”—we need to determine whether their initiative was entirely holy, or whether there were illegitimate remnants of selfishness intermingled in it. Perhaps it was their negative “not” which “commanded” them! Rectification comes in the form of the two kid goats on Yom Kippur: we need to admit that we have selfish intentions and cast them to Azazel, the place for inappropriate audacity. By doing so, the correct type of audacity, or boldness, comes to the fore, i.e., “holy audacity,” which empowers an individual to enter the inner sanctum of holiness, yet exit unscathed.

The two kid goats offered on Yom Kippur, like all communal sacrifices, are purchased with public money (“from the congregation of the Jewish People”). The public also brings a he-goat as a burnt offering. In addition, Aaron the High Priest (and the High Priest that follows in every generation) also brings an ox as a sin-offering and a he-goat as a burnt offering. The High Priest first confesses his own sins and those of his family over the ox, and then for the sins of all the kohanim (priests). This indicates that the ox rectifies Aaron’s own flaw in the Golden Calf (the calf has grown up and become an ox). The sin of the Golden Calf is one of impatience and seeking immediate superficial gratification. This can be seen as the root cause of all sin, since even the sin of the Tree of Knowledge stemmed from a similar type of motivation.

In the Yom Kippur service, the presence of the High Priest’s wife is emphasized in the background, as the verse states, “And he shall atone for himself and for his home [i.e., his wife],” and this is applied in the law that the High Priest’s service is valid only if he is married. In the sacrifices offered on this day, the he-goat that the High Priest offers as a burnt offering is directed at rectifying his wife. The two principal types of sacrifice are the sin offering and the burnt offering. The sin offering comes to cleanse flaws that were caused through prohibitory commandments, while the burnt offering atones for positive commandments, i.e., not doing what one should have done. This is why the sin offering is more relevant to the active, initiating male aspect of sin, i.e., atonement for negative actions, while the burnt offering is more relevant to the feminine aspect of sin, i.e., atonement for negative passivity. The Jewish woman is the “mainstay of the home,” who initiates and acts to effect purity and holiness in the Jewish home, marital harmony and in the family at large, like the “woman of valor” in Proverbs, of whom it states, “And bread of laziness she shall not eat.” This is the atonement effected by the burnt offering, which alludes in particular to Aaron’s wife, Elisheva (אֱלִישֶׁבָע) daughter of Aminadav, since the first three letters of her name are the letters of “he-goat” (אַיִל).

The he-goat that is brought by the public as a burnt offering alludes to Aaron’s remaining two sons, Elazar and Itamar. In the natural course of things, Nadav and Avihu would have been granted the High Priesthood, but since they died, the High Priesthood was transferred to Elazar, and in later generations fluctuated between Elazar’s descendants and those of Itamar. The younger sons might be wary of entering the position of their older colleagues to take on public leadership, that’s why the public offer the he-goat burnt offering: to encourage Elisheva’s descendents to observe the commandment, “Make an effort to be a man,” by getting up to assume public leadership roles, and not hiding away in false humility.

The Pleasure of Fasting on ...

On Yom Kippur we do not eat or drink,