The Jewish Home Chapter 10: The Mezuzah

This power is also represented by the mezuzah. The word mezuzah means “to bring into motion.” G-d guards, and the house guards the person not only when he is in the house. It also gives him a makeef harachok, to guard him when he is outside his house. This manifests in the physical mitzvah of mezuzah. Even though the mezuzah is the only mitzvah in the Torah over which we bless “to affix” (the mezuzah), which suggests permanence, the word mezuzah means to “make other things move.” In Kabbalah this is referred to as “the force that makes everything move by virtue of the fact that it is fixed.”

The home is sanctified by the mezuzah. This gives the person the power to enter his home and then leave it, “run and return” (Ezekiel 1: 14), in Kabbalah. In the book of Ezekiel this is called “the workings of the Chariots”. One is always going out in order to expand the walls of the house, as in the verse (Isaiah 54:2): “broaden the space of your tent.”Even though one has a home, he must always work to make the home broader. This is the concept of “unbounded inheritance” with which Jacob was blessed and through which he was able to bless others. This infinite expansion brings blessing to all nations of the earth. Ultimately, through this infinite expansion, all the nations will return and serve G-d in unity. 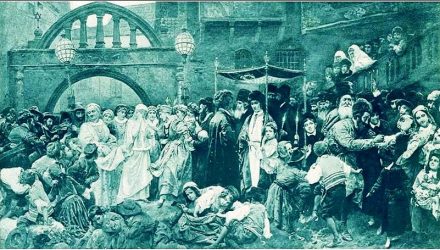 Print this article in PDF format   Mother and Father: the Two Messiahs in Every Home In the Torah’s inner dimension, marriage symbolizes the unification of the

In light of the above, an obvious question arises.

In Kabbalah, the soul of Mashiach, keter, corresponds to the level of