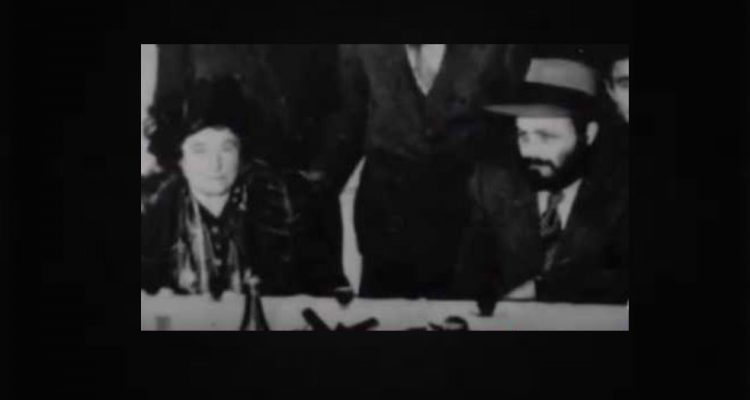 The Rebbe’s Crown in the Merit of His Mother

The Lubavitcher Rebbe was very careful about honoring his mother, Rebbetzin Chanah Schneersohn. Whenever he would finish his daily visit with her, he would take leave with his face toward her, walking backward, so as not to turn his back on her. Once, a friend of the Rebbetzin’s noticed the Rebbe’s conduct, and said to Rebbetzin Chanah in amazement, “How beautiful how your son honors you!” The Rebbe’s mother replied, “Since his Bar Mitzvah, I have not seen his back!”

“I Will Walk Before God”

Let us delve into not turning one’s back. One of the earliest collections of teachings from the Alter Rebbe is named Et’halech (אתהלך), which means, “I will walk.” This early collection is named after the verse, “I will walk before God in the lands of the living,”[1] the verse that begins the first essay in the collection. In that essay,[2] the Alter Rebbe explains‏ that the word et’halech does not refer to walking directly to the destination, but is more like a to-and-fro movement—which, to use a Biblical reference from Ezekiel, is known as a run-and-return. One draws near and then backs off. This is the type of movement that governs our serving God. There are times when we draw closer to God. These are times of expanded consciousness, when we feel an ascent in our service of Him. But there are also times when we fall; times when our minds and consciousness feel contracted and distant from anything holy.

King David says, as the Alter Rebbe explains, that no matter what the condition of our et’halech, no matter how we are walking—both when we are drawing near and when we are backing away—we are always, “before God.” When we draw near, we turn to face God. But even when we fall and back away, we continue to face God. Even, says the Alter Rebbe, when we are in a period of contracted consciousness, when we have fallen and backed off, we still think about God.

This is the secret of honoring one’s parents. The Rebbe was careful not to turn his back on his mother both when he was coming close and when he was backing away, his relationship with her remained face-to-face. He was still thinking about her and kept his eyes on her.

“With the Crown that His Mother Crowned Him”

We can assume that the Rebbe was meticulous about honoring both his parents, but if by Divine Providence this story is specifically about his mother, we can further explore this point. It is known that before the shidduch (agreement to marry) between the Lubavitcher Rebbe and the Previous Lubavitcher Rebbe’s daughter, Rebbetzin Chayah Mushka, was concluded, Rebbetzin Chanah hinted—and even more than that—that the shidduch was with the understanding that her son would be the previous Rebbe’s successor. The previous Rebbe did not want to explicitly commit to that, so he said, “the chassidim are smart, they will certainly choose the appropriate person….” Rebbetzin Chanah understood this as an agreement with her request, and the shidduch was concluded.

If so, we can say that in great measure, it was the Rebbe’s mother, Rebbetzin Chanah, who made sure to crown her son with the mantle of leadership (from her internal, essential understanding that he was truly the person worthy to be the leader of the Jewish people). We can also say that the Rebbe was so meticulous in his honor for her for this reason.

From this story, we see that in many aspects, it is the mother, more than the father, who takes care of the son’s “crown.” The mother is sensitive to her son’s great potential and ensures that he will actualize it completely to fulfill his mission and role in life. We learn that it is the mother who crowns her son from an explicit verse in the Song of Songs, “With the crown that his mother crowned him on his wedding day”[3]‏.

In the verse about the creation of the world, “Havayah with wisdom founded the earth, with understanding He founded the heavens,”[4] there are four elements: wisdom, understanding, heaven and earth. These four elements parallel the four letters in God’s essential four-letter Name, Havayah. Wisdom and Understanding parallel the yud and hei in God’s Name and are also known as the father and mother principles. Heaven and earth parallel the two letters vav and hei in Havayah. They are like the father and mother’s son and daughter.[5] Together, the son and the daughter represent the fulfillment of the mitzvah, “to be fruitful and multiply.” ‏[6]

Thus, the nuclear family consists of the father, mother, son and daughter. The verse says that “Havayah with wisdom founded the earth”—it is wisdom that founds the earth, specifically the father who is connected to his daughter, who represents malchut (kingdom). The father concerns himself with his daughter in the same manner that the mother concerns herself with her son. Conversely, “with understanding He founded the heavens,”—the heavens, the vav of the Name Havayah, the Small Countenance, the attributes of the heart, are established and nurtured by the mother, who represents Understanding.

Every son has the crown that fits him, “All of Israel are the children of kings”[8]‏ (in the Zohar the reading is: “All of Israel are kings”[9]‏), which is the context with which every person should lead (in his home and on his life-mission). The mother has the sensitivity to identify the crown and tends to its actualization.

The Rebbe was aware that his Crown came from his mother (ever since the time that his da’at was complete, when he became a bar-mitzvah before the shidduch with the daughter of the Rebbe Rayatz was concluded. Since then, his mother did not see his back, as above). The Rebbe was grateful to his mother and was careful to always keep his relationship with her face to face—turning his face to his mother and receiving inspiration from her for the fulfillment of his leadership role.

The mother prepares the crown of her son. She gives him a feeling that is above reason and consciousness (otherwise known as the superconscious Crown), which tells him from which things he should back off and in which direction he should go. That is a good reason not to turn our backs on our mothers—to receive inspiration from them as to which direction to progress in life, including the direction that will ultimately lead us to our true, fitting crown.

Can we be Happy and Sad Simult...

How can we transform the