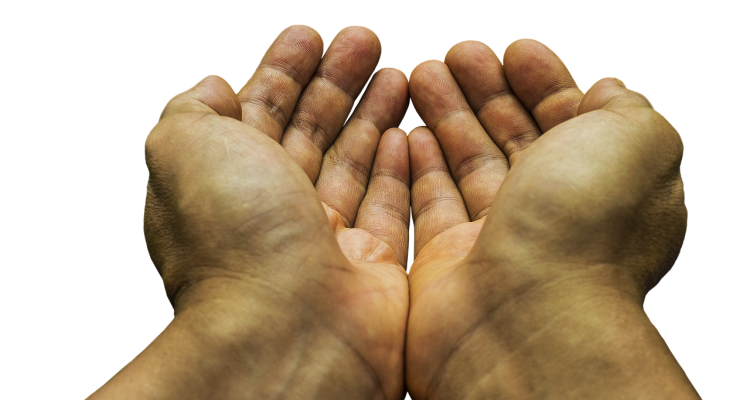 “A person is poor only in his faculty of knowledge” said the sages[1]. Poorness in knowledge, however, generates actual poverty. The two types of poor people, poor in knowledge and poor in acquisitions – are mentioned in the verse “He saves the poor person from he who is stronger than him, and the poor and the impoverished from he who robs him.[2]” The Hebrew word for “poor person” is עני (ani). If the letters are rearranged, they spell עין ayin (eye). Poverty begins with a person’s perspective on reality (which flows forth from his faculty of knowledge – his inner consciousness). The rectification of the two poor people in the verse above is contingent upon the rectification of the two eyes:

When the sixth Lubavitcher Rebbe, the Rebbe Rayatz, was four years old, his father, the Rebbe Rashab, explained to him that a person is born with two eyes so that with his right eye, the eye that loves and draws others near, he will look at his fellow Jews and at the prayer book. With his left eye, the eye that withdraws and contracts, he should look at “the candy and the toy.” When it comes to matters of holiness and our fellow man, we should open our eyes wide to see the virtues and spiritual heights that we have not yet achieved, while longing and attempting to ascend the ladder of holiness. When it comes to mundane matters, we should be looking with the opposite perspective. We should look at those who seem to be below us, and with that perspective, cultivate the approach of feeling wealthy and happy with our lot. A person who reverses the order – feeling pleased with himself in spiritual matters and desiring more and more physical pleasure, becomes “poor in knowledge.” A person who does not have a drive to grow remains small and poor. He will be literally poor, for “A person doesn’t die with even half his desires in his hand.[3]” He will always feel poor and lacking.

It is important to internalize this understanding from a very early age. But there is an additional, deeper explanation, more relevant to our adult years, when we are concerned with our image and relationships with others: A person was born with two eyes so that he can look at others with his right, loving eye and see the expanse of their virtues. He should turn his left, critical eye toward himself, which will result in humility and a will to improve himself.

Here, as well, trouble begins if we reverse the order: When we look at others with our left, “evil” eye, which focuses on their shortcomings, we cannot connect to them and we become “poor in knowledge.” Da’at (knowledge) also means ‘connection’, as in the verse “And Adam knew (yada) his wife Eve.[4]” There is no one more impoverished and deplorable than a person who cannot truly connect to others, and remains encased in his loneliness (while imagining how everyone else is “stronger than him” and is trying to take advantage of him and harm him). Furthermore, when a person looks at himself with his right, good eye instead of taking responsibility, rectifying what is wrong and progressing, he becomes spoiled, feels pathetic and is convinced that the world has robbed him of his entitlement.

The segulah (spiritual remedy) that will stop us from feeling poor – upon all its manifestations, is rectification of our eyes-perspective. When we look at others with our right eye, we can come close to them, learn from them and connect to them. In this state we are wealthy in knowledge. We learn from everyone, are surrounded by loving friends and people cooperate with us and support us. Looking at ourselves with our left eye, with penetrating criticism, makes it possible for us not only to suffice with little, but to become actually wealthy. God is waiting for us to emerge from our entitlement consciousness. He wants us to stop taking the credit for our achievements and successes (“My power and the strength of my hand have made this success for me.[5]”). As soon as we remember that everything comes from Him and He gives us the power to succeed, He will shower us with endless abundance.