Long before Mitzvah Tanks, Tefilin Stands, and over 4,000 Chabad centers around the world, was an outreach campaign initiated by Elkanah, father of Samuel the Prophet. 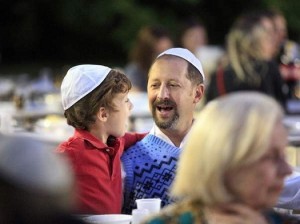 Alan G. Weinstein and his son, Peter, 5, sing together during a traditional public Passover Seder at the Lubavitch-Chabad Jewish Student and Community Center in Gainesville, Fla. Photo: Erica Brough

Answering the Call of Duty

Mishnah 5 of chapter 2 of Pirkei Avot concludes, “In a place where there are no men [i.e., leaders], you should strive to be a man.” Related to this teaching, the Jerusalem Talmud states, “‘Do not despise your old mother’ [Proverbs 23:22]. Said Rabbi Ze’ira: If your nation has become old and weak [in Hebrew, ‘mother’ can be read ‘nation’), do not despise her, but rather rise up and strengthen her as did Elkanah, who instructed Israel to make pilgrimage to the Tabernacle, as it says ‘And the man went up from his city…’ [1Samuel 1:3].”

The sages state that Samuel the prophet is equal to both Moshe Rabbeinu and his brother Aaron combined. Samuel anointed the first two kings of Israel: Saul and David. As Moshiach (Messiah) in Hebrew means “anointed one,” the very concept of Jewish messianism derives from him. His mother Channah was barren. She poured out her heart to God in the Tabernacle in Shiloh and God gave her Samuel. When Samuel was two years old and weaned, his mother brought him to Shiloh, to the Tabernacle, and placed him in the care of the priests, because she had made a vow that the son born to her would be dedicated to God.

Now the question is: How did she merit to give birth to such a great son—the source of Mashiach, the one who anoints? For this you certainly have to have tremendous merit. There are many things about her merits, but now we’ll hear about Samuel’s father, Elkanah. Of course there are two people, mother and father, that have to merit such a great son.

First of all the Jerusalem Talmud tells us not to despise our nation if it’s weak. Strengthen it, make a fence around it, and take your example from Elkanah. What did Elkanah do? He taught and led the Jewish people to make the pilgrimages to the Tabernacle on the festivals. In the Bible there’s very little said about Elkanah, but one of the things it does say is that he had a custom to go to Shiloh, to the Tabernacle every year. The sages had an exact tradition of who Elkanah was and what merited his having such a great son. The Jerusalem Talmud here doesn’t give the whole story behind this man. But in the Tana Devei Eliyahu in the 8th chapter, it brings his story at length. Elkanah is the role model for someone who took a leadership role and strengthened his whole generation.

Four pilgrimages a year to the Tabernacle in Shiloh

Elkanah made the pilgrimage to Shiloh, to the place of the Tabernacle, four times a year. Before the Holy Temple was built in Jerusalem by King Solomon, God’s Presence manifest in the desert Tabernacle, which once the Jewish people entered the land of Israel made its way to Shiloh, where it stood for 369 years. Now, making the pilgrimage four times a year is very strange because there are only three festivals. We’ve never heard of a requirement to go four times!? The festivals of Passover, Shavu’ot and Sukot are the time of pilgrimage.

Elkanah devoted his whole life to bringing the Jewish people to Shiloh. This is like the saying “with what mitzvah did your father most shine brilliantly”? The “father” in our present discussion is Samuel’s father. Elkanah merited Samuel because of his most brilliant mitzvah—making the pilgrimage to see God and be seen at the Tabernacle. His campaign was to bring the entire Jewish people to Shiloh.

The first thing that we now see is that he used to go four times a year. Why four times? Three from the Torah and one more that he took upon himself as a present to God. When something is your mitzvah, then you have to be a chassid (doing more than the law requires) vis a vis your special mitzvah. So he volunteered to go not three but four times. The sages don’t say when this fourth time was. But, as we’ll see later on, there is a mathematical principle from which we can calculate a possible good choice for the date of his fourth pilgrimage.

Sometimes in the Torah it is forbidden to add a mitzvah—in this case though it is permissible. You can go every day to the Temple. Not only is it ok, but it’s a sign that you’re a chassid who does more than what the Torah requires of him. It was a nedavah, a “present” or “contribution” that he gave out of his heart.

When Elkanah and his extended family were on the way, wherever they camped, they camped in the marketplace instead of local inns or homes. The three festivals are when they are because it is difficult to travel during the winter (it also means that the fourth time he added probably could not have been in the winter). He made sure that all the men and women were separated when they went to sleep. Since they were sleeping in the marketplace, all the men of the community came to be with his family’s men, and all the women would gather round the females in his family. Each woman would choose a woman to talk to and each man would choose one to talk to—this is pure Jewish outreach.

The entire country became excited. They would ask them of course: “Where are you going?” They would answer, “We are going to the House of God in Shiloh from whence Torah and good deeds go out to the entire world. Why not join us and we’ll go together.” Immediately people began tearing. Other Jewish people never dreamt of going to Shiloh, when they heard the sincerity of these people and saw their self-sacrifice, they immediately decided to join them. Every time he went through new towns until, eventually, all of Israel made the pilgrimage to Shiloh in his merit. His campaign was a total success.

When was Elkanah’s fourth pilgrimage?

Now let’s go back to our question of when was Elkanah’s fourth pilgrimage. The answer—a calculated ‘guess’—can be found if we first understand the relationship between the dates of the regular three festivals. Again, this is not brought anywhere, but is an example of how mathematical logic, applying our understanding, can help us understand how to serve God.

The 15th of Nisan is Pesach, Shavu’ot is the 6th of Sivan, which is 50 days after Pesach, and Sukkot is on the 15th of Tishrei. Elkanah had to find a clue as to when would be the most appropriate time to make his fourth pilgrimage, the one he volunteered on his own. When a person adds something, he ideally should try to find a support for his innovation in the Torah itself, even though the innovation is his.

Now the length of time between Shavu’ot and Tishrei is much greater (more than twice) the time between Pesach and Shavu’ot, so it seems logical that the fourth pilgrimage should be conducted sometime between Shavu’ot and Sukkot. As we said, from Pesach to Shavu’ot there are 50 days. From Shavu’ot to Sukkot there are 127 days. We should select a day that would make an arithmetic progression. How should we divide 127 so that we add the same number of days (50) plus a constant to arrive at the date of the fourth pilgrimage, and then add the same number of days plus twice the constant to get to Sukkot? The answer is easy to find: the constant is 9. Therefore, if we add 59 days from Shavu’ot we arrive at the 6th of Av. Then we add 59 plus 9 more days, or 68 days, and we indeed arrive at Sukkot. So the series of differences between the 4 dates is a simple arithmetic series: 50, 59, 68. The average value of these three numbers is 59, and since in the Hebrew calendar one month is full (30 days) and the next month is missing (29 days), 59 days means exactly two months. According to this calculation, Elkanah’s fourth pilgrimage falls on the 6th of Av, which is the best time of the year to sleep outside.

Now, what about Tisha B’av? Since in the Torah each holiday encompasses 7 days (even on Shavuot one has 7 days to bring his sacrifices to the Temple), it is the middle point of Elkanah’s holiday. So he was already then sweetening the 9th of Av. The 6th of Av is usually the week in which Tisha B’av occurs, which according to our custom is the greatest time of mourning. If everyone would have followed Elkanah’s custom to arrive at the Temple on the 6th of Av, there would have been no destruction of the Temple.

The Transformative Power of...