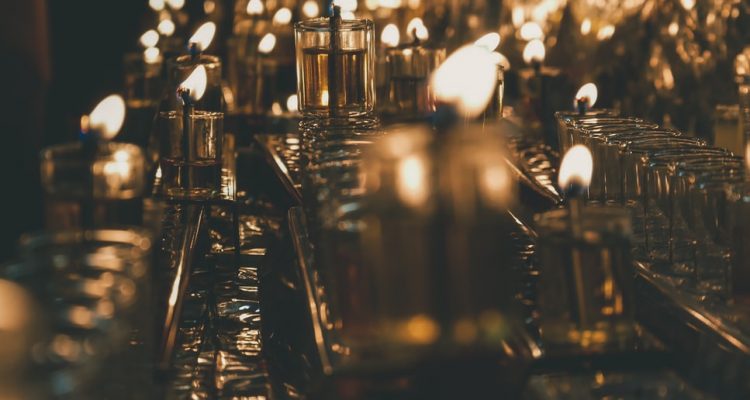 Abraham began to illuminate the world, and that light returns and illuminates the dark winter days every year on the holiday of Chanukah[1]. Abraham’s affinity to Chanukah is alluded to in many of its facets: His prophetic statement at the Binding of Isaac, “And I and the lad will go until here” (koh/כה)  [2] alludes to Chanukah. Koh equals 25, a reference to the first day of Chanukah, the 25th of Kislev[3].

Chanukah is about publicizing the miracle in the public space. This is very relevant to Abraham, who publicized God throughout the world.

The essence of Chanukah, which is illuminated by Abraham, is the completion of the rectification of the World of Chaos (Tohu). In fact, Tevet, the month in which Abraham was born, equals ‘tohu’ (chaos).

Abraham arrives on the world stage at the end of the “two thousand years of chaos” and begins the “two thousand years of Torah”[4]. All of Abraham’s service is directed to being “the father of a multitude of nations.”[5]  His work to bring converts to belief in the One God (which is the depth of the mitzvah of hosting guests[6] – to bring the non-Jewish guests into the realm of holiness), is the rectification of the sparks that fell into the world of chaos and the fulfillment of the destiny of “Not for chaos did He create it, for settlement did He form it”[7].

The inner dimension of the Torah[9] explains that the entire process of “You gave the mighty into the hands of the weak, etc.[10]” is the injection of the lights of chaos of the mighty-many-impure-wicked-evil into the vessels of rectification of the Jewish people. The chaos was expressed in every Hasmonean (Chashmonai, an anagram for ‘Mashiach now’) in the fact that he was brave (the secret of the warmth of the Chanukah candles) while the rectification was expressed in the fact that he was a righteous tzaddik (the secret of the light of the Chanukah candles). The numerical value of Hasmonean equals tzaddik צדיק גבור (a mighty tzaddik).[11] This is also the ability to draw down the lights of chaos of the eight days – a number that is above nature – into the rectified vessels of “the mitzvah candle”[12] that is fulfilled throughout the generations.

The converts who Abraham and Sarah brought into the fold in their generation did not remain Jews[13]. Later, in the following generations, a great reduction in conversion took place. The Nation of Israel, beginning with Jacob – was preoccupied with building itself and its families. During the darkness of the exile, due to fear of the non-Jews, spreading the light of Torah was practically non-existent. The light of Chanukah was hidden away,[14] in accordance with the  law, “in time of danger (when it is dangerous to publicize God and to encourage non-Jews to convert) he sets it (the Chanukah menorah) on his table and that will suffice.”[15]

In our day, there is no longer any danger involved, and we can once again shine the light of Chanukah out to the world. (Even for those Chassidim who continue to keep their Chanukah menorahs inside their homes, the Lubavitcher Rebbe initiated public Chanukah lightings in busy places, with giant Chanukah menorahs, in which non-Jewish dignitaries often participate, highlighting the “pride of Jacob”). The brilliance of the false religions has faded for most non-Jews as well, and there is a willingness to receive the true light of the Torah.[16]

In this manner, “the end is wedged in the beginning and the beginning in the end.”[17] Specifically in the final generation, the generation of redemption, we must return to the chaotic lights of Abraham (already initiated with the service of the Ba’al Shem Tov, to whom the Mashiach said that he will come when “your wellsprings burst forth”[18]), publicize God throughout the world and bring converts into the Nation of Israel.

Today, encouraging conversion – the main task of the first Jew, Abraham – must become the main task of the entire Nation of Israel. It is upon us to achieve the fulfillment of the destiny of, ”Hear oh Israel, God your God, God is One”[19]: “God, Who is our God now – and not the God of the idol worshippers, will become the One God,” as is written, “For then will I turn to the peoples a clear language, that they may all call upon the name of God, to serve Him with one shoulder.”[20] “For on that day, God will be One and His Name will be One.”[21]

Photo by Josh Appel on Unsplash

[10] As per the Al Hanissim prayer recited on Chanukah.

[13] Abraham’s conversions, in his desire to bring everyone close (as in his statement, “If only Ishmael would live before you”) are the secret of submission. He wishes to do good for all and bring everyone near to God, stemming from his feeling of “And I am dust and ashes” (see Likutei Torah Naso 20). The conversions performed by Sarah – who washes Abraham’s hair and stringently sends away all those not suitable (as when she said, “Drive out this maidservant and her son”) are the secret of separation. But lasting conversions are only those performed with sweetening, which is what we see in our generation, the generation of redemption. (In a certain way, we are returning to Abraham’s conversion method. He did not winnow out the unsuitable, similar to what Naomi did when she separated Ruth from Orpah. Instead, he spread the light to the entire world, relying on the maturity of the potential convert to be drawn close and manifest his deep connection to the  Jewish People).

[14] The secret of the “hidden light” of Creation.

[16] In our generation, Esau is ready for the redemption.

The Secret of Batsheva Part 2

What was David’s mistake?  How