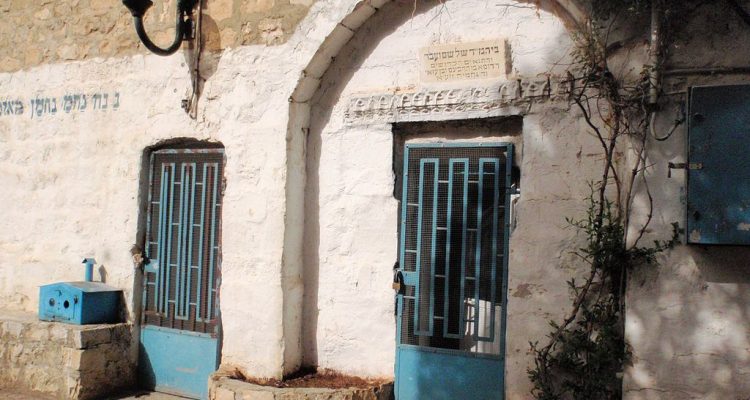 The boys wrestled in her [Rebecca’s] womb and she said, “If so why do I exist?”

She went to inquire of God. God answered her, “Two nations are in your womb, two separate peoples shall issue from your body; one people shall be mightier than the other, and the older shall succumb to the younger.”[1]

What Was Rebecca Doing?

In his commentary on this verse, Rashi, the classic medieval commentator on the Torah quotes the sages: “When she [Rebecca] would pass by the entrances to Shem and Ever’s places of Torah study, Jacob hastened to be born, but when she passed by a doorway of idol worship, Esau struggled to get out.“

Rabbi Shmuel of Shinova (Sieniawa, Poland), author of Ramatayim Tzofim,[2] asks a seemingly simple question on this statement from the sages: “What would bring Rebecca to pass by places of idol worship in the first place? She was undoubtedly careful to guard the purity of her unborn children and made efforts, while still pregnant, to regularly be present (for their sake) at her husband Yitzchak’s Beit Midrash (house of Torah study.) Further, why was the situation described as a struggle or fight between the boys in trying to determine whether they would ultimately enter a Beit Midrash or a place of idol worship? Clearly, they could not be in two places at the same time, so what was the struggle about?[3]

He then proceeds to offer the following answer:

It is known that our patriarchs and matriarchs would approach strangers in order to convert them [to belief in the One God, the Creator]. This necessitated using logic and philosophy in order to speak to the idol worshippers and prove to them that there was no substance to their beliefs. This is what “the doorway to idol worship” refers to. Esau would be struggling to get out at that time, because he was from the impure side and wanted to connect with the idolaters. He could not hear the positive and sacred words that were uttered in such a meeting with an idolater.

Jacob, on the other hand, would have nothing to do with these discussions. It was only after the idolater would convert and learn Torah in a Beit Midrash for the purpose of serving the Creator, would Jacob feel the need to connect with them.

In summary, Rabbi Shmuel adds that the word the sages use to describe Jacob’s haste to leave the womb (מְפַרְכֵּס)—a word that usually describes the convulsions of the soul as it departs the body[4]—hints at Jacob’s self-sacrifice in his struggle to not become defiled by the acerbic nature of Esau’s evil and impurity. This self-sacrifice has been carried down through the generations by young Jewish men and women who have faced similar struggles. To counter the influence of the impurity around them, many of them found a safe harbor by clinging to tzaddikim.

Rabbi Shmuel of Shinova’s novel insight is that to bring the world closer to Torah, one must actively leave the Beit Midrash and go out among the nations. This mission even applied to Rebecca, a modest woman careful to raise her children in holiness and purity. This inspired Torah teaching was no doubt heard from Rabbi Shmuel’s teacher Rebbe Simchah Bunim of Peshischa who is known to have been highly successful in bringing those distant from God closer through philosophical discussions that had real-world applications.

The Academy of Shem and Ever

Each of the patriarchs including Isaac had their own Beit Midrash that was entirely dedicated to the pursuit of that which is holy; converts could enter only after completing their conversion. Rebecca, however, would go out to an outreach institute that welcomed those seeking God and seeking the path of the patriarchs and matriarchs. One might say that this was the first Beit Midrash for what we designate as The Fourth Revolution in Torah learning,[5] whereby even after the Giving of the Torah at Mt. Sinai, all the people of the world are invited to learn about Torah. In the time of the patriarchs, this was known as the Beit Midrash of Shem and Ever, who were not yet Jews, as they were wise and righteous men who received their tradition from Noah, prior to Abraham. The Beit Midrash of Shem and Ever still exists to this day and in our times has reemerged with an even greater sense of purpose!

In effect, the universal Academy was divided into two “tents.” The Hebrew word for “tent” (אֹהֶל) is known as an acronym for two types of light, or revelation: either “light that illuminates the self” (אוֹר הַמֵּאִיר לְעַצְמוֹ) or “light that illuminates others” (אוֹר הַמֵּאִיר לְזוּלָתוֹ). So one part of the universal Torah Academy was named “the Tent of Shem” (אֹהֶל שֵׁם) and the other was named “the Tent of Ever” (אֹהֶל עֵבֶר). Why was the Beit Midrash—the universal Academy dedicated to teaching the ways of God to all people of the world—named after both Shem (who was Noah’s eldest son) and his great-grandson, Ever?

In the Tent of Shem, the teachings of the Torah’s inner dimension were taught. “Shem” literally means a “name.” In the Zohar, for example, we find the phrase, “the secret of the Name”[6] (רָזָא דִּשְׁמָא) referring to the secret and inner essence of God’s Name. Thus, in the Tent of Shem they studied the Torah’s inner essence and God’s Names. This revelation is light that illuminates inwardly, and penetrates the psyche and reality, changing it from the inside.

By contrast, the revealed, practical parts of the Torah that are relevant to all people were taught and studied in the Tent of Ever. Ever’s name lends itself to the well-known legal term, “prior to their performance of mitzvot [commandments]”[7] (עוֹבֵר לַעֲשִׂיָּתָן), thus connecting him with the light that illuminates outwardly and rectifies others and reality through the performance of God’s commandments.

The Lubavitcher Rebbe explains[8] that when a Jew who is distant draws closer to Torah, he or she should begin by immersing in the study of the Torah’s inner dimension. He said that for non-Jews, this instruction is even more important, because though they are not yet obligated to keep all the commandments,[9] they are in principle obligated to keep the “duties of the heart,” commandments such as fear of God and love of God, which are fully explained using the Torah’s inner dimension. Thus, the beginning of their studies would be in the Tent of Shem and once they had decided to convert, they would go on to the practical studies taught in the Tent of Ever.

Indeed, Ever represents a new beginning relative to Shem—just as the potential convert began his life anew when he entered the Tent of Ever. The sages state that “the merciful feeling of a father over his son extends to the grandchildren as well,” but Ever was Shem’s great-grandson, suggesting the start of a new period in Noah’s lineage. Ever literally means “a passage,” in this case, the passageway through which a potential convert would pass on his way to full-fledged conversion. Strengthening the identification of Ever’s Tent with the revealed dimension of Torah and practical commandments is the fact that Jacob himself spent many years in Ever’s academy before making his way to meet Laban in Haran.[10] As Jacob later reported, he was careful to keep all the commandments from that time on,[11] apparently after he had studied them in Ever’s tent.

The Return of Esau

In one instance, Rebecca is described as, “Rebecca, the mother of Jacob and Esau”[12] (רִבְקָה אֵם יַעֲקֹב וְעֵשָׂו). In his commentary on these words, Rashi wrote, “I don’t know what they are meant to teach us.” It would seem that although Isaac loved Esau,[13] Rebecca has yet to reconcile with him. Isaac’s ability to see the good in Esau is a result of his ability to (remain blind to Esau’s present state and to) see Esau’s future state. After all is said and done, Esau, despite his persecution of his brother Jacob, is destined to become a penitent and be purified (just as his symbol, the pig,[14] will eventually be purified[15]).

Esau’s eventual return depends on his mother Rebecca. Sarah, Abraham’s wife, is described by the sages as the force that rejects non-Jews deemed unworthy of joining the Jewish people. But Rebecca, who already in her lifetime made her way to the universal Academy of Shem and Ever, does not give up on them. She is focused on rectifying them together with her son Esau through the power of the Torah sage that debates with the non-Jewish mindset and demonstrates the pure intellectual and spiritual light of the Torah.  In the merit of Rebecca’s efforts (and suffering, when she carried them in the womb), the prophecy she received, that “the older will succumb to the younger”[16] will be fulfilled when Esau’s spiritual legacy will embrace the Torah.  It is then that Rebecca will be proud to bear the title, “Rebecca, the mother of Jacob and Esau.”

[2]. First published in Warsaw in 1881, Ramatayim Tzofim is an anthology of teachings from the Peshischa (Przysucha, Poland) school of Chasidic thought on the Tanna DeBei Eliyahu.

[3]. One possibility might be that when one child hastened to leave the womb, the other would try to prevent him from doing so.

[4]. This word is usually used by the sages to describe the convulsions associated with soul’s departure from the body. See for example, Mishnah Ohalot 1:6, Chullin 3:3, etc.

[5]. Since the 24th of Tevet, 5775 (2014), Rav Ginsburgh has been promoting a fourth revolution in Torah learning, which would open Torah study in all areas for all people of the world. For more see tiny.one/4revolution and https://tiny.one/more4revolution on our website.

[6]. In the Talmud (Yoma 83b), we find that Rabbi Meir would reveal the inner essence of people and places based on their names, thereby revealing reality’s inner dimension through names.