The opening sentence of this week’s Torah portion, Parashat Shoftim, is “You shall place Judges and law enforcers at all of your gates that Havayah, your God gives you to your tribes and they shall judge the people with a just judgment.” Further on in the parashah, we find the verse, “Justice, you shall pursue justice, in order that you live and inherit the land that Havayah, your God gives to you.” Both of these verses allude to the inherent connection between God’s gift of the land and the necessity of enforcing righteous justice. Rectifying the method of government and the court system is one of the most vital public commandments, and this is also explicit in the verse, “Appoint, you shall appoint upon you a king whom Havayah, your God has chosen for you, from amongst your brethren you shall appoint a king upon you; you will not be able to appoint upon you a foreigner who is not of your brethren.” So, first we have judges and then we have a king and later on in the parashah we find that God will also appoint a prophet, who is also “of your brethren.” Contemplating this parashah, we see that all the official functionaries in the kindgom are described: priests, levites and judges, a prophet, a police force and a king. To these six functions, the Zohar adds the duty of the kingdom’s citizens to testify truthfully in front of the courts.

Altogether there are seven different officials who complete the array. As in a musical orchestra that contains different players and instruments, we need a government that is composed of a variety of officials who act together in harmony. The first three, the priest, the levite and the judge, are one unit who represent the sefirot of loving-kindness, might and beauty, respectively. The last four, the prophet, the police officer, the witnesses and finally, the king, represent the sefirot of eternity, acknowledgment, foundation and kingdom, respectively.

In order to judge and define who is innocent and who is guilty and to authorize appropriate reward and punishment, one needs to be learned in all the laws of the Torah whose “ways are ways of pleasantness and all its paths are peace.”[1] The judge is associated with the sefirah of beauty, which according to the Zohar represents the Torah, to which all of the other categories of officials are subject, including the king. Although we might think that judgment is harsh and corresponds to the sefirah of might, the Zohar teaches[2] that true judgment is issued through compassion, the inner motivating force of the sefirah of beauty. 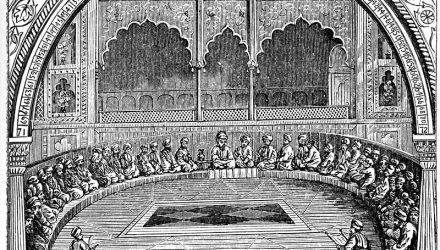 “And they shall make this declaration: ‘Our hands did not shed this blood, nor did our eyes see it done.’”[1] וְעָנוּ וְאָמְרוּ יָדֵינוּ לֹא שָׁפְכוּ [שפכה] אֶת

The gematria of the opening phrase of Parashat Shoftim

The roles played by the judges and the king

Breaking Out of Your Comfor...

In parshat Shoftim, the Torah briefly reiterates the commandment of