“And Moses assembled the entire congregation of the Children of Israel and he said to them, ‘These are the things that G-d commanded you to do them. For six days, work shall be done and on the seventh day it shall be holy for you, the Sabbath of Sabbaths for G-d, all who do work shall be put to death. You shall not kindle fire in all your dwelling places on the Shabbat day.” These verses are the introduction to the commandment of the work of the Tabernacle. It is from these verses that we learn the prohibition of performing the work of the Tabernacle on Shabbat.

The Tabernacle unites the Nation of Israel. It is the center in which G-d dwells amidst Israel. This is why the introduction to the Torah portion that is devoted to the construction of the Tabernacle begins with the words, “And Moses assembled”. The entire Nation of Israel comes together to form one, large congregation – a public.

On Shabbat, there is no need for the action of building the Tabernacle, for Shabbat itself is the secret of the unity of Israel. On Shabbat, every Jew has an “additional soul” that extracts him from his own personal concerns and connects him to all of Israel.

From the commandment, “You shall not kindle fire … on the Shabbat day,” our Sages learn that the Rabbinical Court does not issue punishments on Shabbat. Shabbat is a day of peace, during which it is inappropriate to kindle judgements and harshness (including holy harshness that must be implemented). Furthermore, the Zohar explains that “You shall not kindle fire” means that on Shabbat, one must be particularly careful of anger. The fire of anger burns all good and separates between people.

May we enjoy Sabbaths of peace!

“And Moses said to the Children of Israel, ‘See, G-d has called the name of Betzalel the son of Uri the son of  Hur of the tribe of Judah. And He has filled him with the spirit of G-d, with wisdom, with understanding and with knowledge and in all manner of workmanship”. Betzalel is the wondrous artist charged with the work of the Tabernacle.

Our Sages interpreted the name of Betzalel as meaning “B’tzel El”/in the shadow of G-d. He is in G-d’s shadow and he knows how to accurately perceive His will. Why would this acumen be called being “in the shadow”? Let us first note that Betzalel is the son of Uri, which means “light”. His grandfather, Hur (חור) , is also part of the picture. Hur means white, or pale-ness, hiver/חור in Hebrew, which is cognate to Hur. Betzalel’s name means “Shadow, the son of Light, the son of White.”

We can explain this intriguing name by simply saying that art begins with the play between light and shadow. But there is deep meaning in this name.

Shadow is a dark place. It seems that G-d does not shine there. It is the “vacated space of the contraction” in which the world was created. In our primal consciousness, we are in a dark place, distant and disconnected from G-d.

And then, wondrously, a beam of light pierces the vacated space of contraction – a Divine light that fills the created reality that is within the vacated space. This is the second stage of consciousness. First there was darkness and then “there was light” – Betzelel the son of Light (Uri).

But there is an even greater wonder: The vacated space of contraction (that looks like a black  hole (חור/hor) is actually white, (חור/hur). The contraction is not to be understood literally. G-d’s infinite light is actually here with us.

Vayakhel-Pekudai: Tuesday: The Symbolism of the Menorah

We can actually identify the other three crowns within the Menorah. The light of the Menorah alludes, of course, to the Torah, “Torah or/ the Torah of light”. The candles of the Menorah allude to the Crown of Priesthood, as was said to Aaron, “When you light the candles”. The candles of priesthood spread the light of the Torah (as is written in Deuteronomy, “They [the priests and the Levites] shall teach Your laws to Jacob”). The body of the Menorah, made of one piece of pure gold, alludes to all the souls of Israel, which are united at their root (as we learned in the Torah portion of Terumah) – an allusion to the Crown of Kingdom.

It is no coincidence that the Menorah is the emblem of the Nation of Israel. But in order for the emblem to be complete, the candles of the Menorah must be lit: The Kingdom of Israel must be founded upon the Torah and service of G-d. When that will be the case, the Menorah will transform from an inanimate symbol to a vital and illuminating source of inspiration.

At the beginning of the Torah portion of Pekudai, Moses gives a detailed accounting of the money donated to the Tabernacle. Every Jew gave half a shekel (a particular coin of money). Since there were 603,550 people, that makes 301,775 shekels. Every 3000 shekels is a bar of silver. As such, there were one hundred full bars. “And the one hundred bars of silver were for casting the sockets of the Sanctuary and the sockets of the veil, one hundred sockets for one hundred bars, a bar for a socket.”  What was done with the rest of the silver? “And the one thousand seven hundred and the five and seventy he made into hooks for the pillars and overlaid their heads and made fillets for them.”

Our Sages say that Moses initially forgot what had been done with the 1775 remaining shekels, until G-d illuminated his eyes and he saw that they had been used for the hooks for the pillars. What is the significance of this?

There are 600,000 inclusive souls in the Nation of Israel. (These souls divide into additional individuals). Every soul has its own letter in the Torah, as alluded to in the name Israel/ ישראל’, which is an acronym for: יש ששים ריבוא אותיות לתורה/There are six hundred thousand letters in the Torah. All the souls are engraved on the heart of Moses, the giver of the Torah. His soul includes all the souls of Israel.

There are, however, souls that are ‘remainders’. These fallen souls do not have a letter in the Torah! They are the 3550 that remain after the 600,000 in the counting of the congregation. That is why Moses does not ‘see’ them at the beginning. He doesn’t remember what was done with their silver – it seems as though they have no portion with the Nation of Israel!

It is specifically in these forgotten souls, though, that the secret of the redemption is concealed. A person who apparently has no letter in the Torah, no manifest connection to the Torah and has practically been lost – can turn into the greatest returnee to G-d. Generally, our connection to G-d is channeled through the Torah, as is written in the Zohar, “Israel is intertwined with the Torah and the Torah is intertwined with the Holy One, Blessed Be He.”

But there is another, concealed connection – a direct connection between Israel and G-d. It is specifically those lost souls, as it were, that have no detectable connection to the Torah, which can reveal the direct connection to G-d. These souls are the “hooks of the pillars,” the connecting hooks (vav hachibur, the letter vav that in Hebrew grammar denotes connection) that connect Israel to G-d and the Jews one to another. They are also the vav hahipuch, the transformative letter vav, which in Hebrew grammar denotes turnabout – the souls of those who return to G-d out of love, transforming all the sins into merits, thus bringing the redemption.

“And he put them on the shoulder pieces of the ephod, stones of remembrance in settings of gold, graven with the engravings of a signet, according to the names of the children of Israel.”

The Holy Ari teaches that the secret of the shoulder pieces is connected to the “unification of memory” – just as we see the stones on the shoulders of the High Priest, which are called “Stones of Remembrance”.

What is between the two shoulders? Chochmah/Wisdom and Binah/ Understanding reside in the brain in the head, while Da’at/Knowledge resides in the back brain, which descends to the spinal cord, between the shoulders. Memory is a characteristic of Da’at. One can invent something with Chochmah/Wisdom, understand it well with Binah/Understanding, yet forget it. It is only through Da’at/Knowledge, which is internal connection, that memory is maintained. In the Unification of Memory, we draw down “one thousand lights”. The numerical value of katef/shoulder is 500. Thus, two shoulders equal 1000.

The onyx stone is one of the twelve stones of the Breastplate. In the Breastplate, it is the stone that represents Joseph the Tzaddik. The onyx stone in the shoulder pieces  is also connected to Joseph the Tzaddik: Another word for ‘shoulder’ in Hebrew is Shechem, the name of the city of Joseph. At the Rite of the Blessing and the Curse, six tribes stood on Mount Grizim and six tribes on Mount Eival – exactly like the six tribes that are written on each of the onyx stones on the shoulder pieces of the High Priest.

Vayakhel-Pekudai: Friday: The Light and Dark Sides of the Bell

“A bell (pa’amon) and a pomegranate, a bell and a pomegranate, on the hem of the Robe, all around.” The High Priest’s Robe, with the bells on its hem, is unique in that it makes sounds. Our Sages learned from this that the Robe atones for the sin of evil speech: “The Holy One, Blessed Be He said: Let an article with a voice come and atone for the action of the voice.”

When describing Samson, the verse in Prophets 13 says, “And the spirit of G-d began to resonate (l’fa’amo – cognate to pa’amon) within him in Machaneh Dan”. Our Sages explain this to mean that the Shechinah began to reverberate before Samson like a bell/pa’amon. From this we can understand that the bells of the High Priest’s robe allude to the dwelling of the Spirit of G-d/Ruach Havayah. Fittingly, the numerical value of pa’amon equals Ruach Havayah/the Spirit of G-d. Furthermore, in these verses, the High Priest’s Robe is called “the Robe of the Ephod”/  מעיל האפד which also equals פעמן/pa’amon and Ruach Havayah/the Spirit of G-d.

Vayakhel-Pekudai: Shabbat: How will the Holy Temple be Built?

“And it was in the first month of the second year, on the first of the month, the Tabernacle was erected.” Rashi brings the Midrash: “Moses said before the Holy One, Blessed Be He, how can it be erected by a person? He said to him, work on it with your hands, it looked like Moses was erecting it, but it actually straightened and stood up by itself. This is why it says, ‘the Tabernacle was erected’ – it erected itself.”

We can use this precedent to understand how the Third Holy Temple will be built. On one hand, the construction of the Temple is a mitzvah that we are commanded to fulfill, as the Rambam writes that the King Mashiach will build the Temple. On the other hand, there are sources that say that the Third Temple will descend from Heaven. This explanation connects both sides: Just as Moses erected the Tabernacle with his hands, so we will build the Third Temple with our hands. But our actions will be infused with Divine power – nature and miracle combined.

Rabbi Ovadiah Sforno writes at the beginning of the Torah portion of Pekudai that the First and Second Temples were destroyed because non-Jews participated in their construction. The Shechinah will inspire our physical labor only when it is performed by the Jewish People. 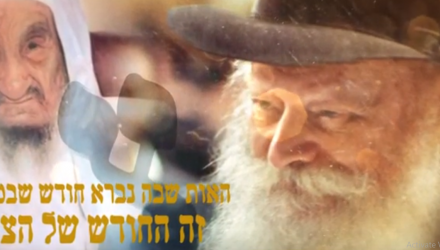 Painting a Portrait of Mash...

A Melody with a Story