Yitro: Sunday: Only Good and Lovingkindness

The concept ‘good’ is mentioned in the first section of Yitro: “And Yitro was happy about all the good that G-d did for Israel, that He saved it from Egypt.” Recognizing the goodness of G-d brings Yitro to cling to the Nation of Israel.

The verses in this Torah portion are full of goodness and love: Yitro hears of the good of G-d, he brings Tzipporah and her sons (who were named for G-d’s goodness to Moses) in order to reunify the family, the meeting between Moses and Yitro, Moses recounts all of G-d’s goodness to Yitro, Yitro responds by blessing G-d and finally, their shared, festive meal.

There are 72 verses in the Torah portion of Yitro. 72 = chesed, ‘lovingkindness’. Lovingkindness (Chesed) is the partner of good (Tov) as in the verse, “May only (Ach/אך) good and lovingkindness follow me all the days of my life”. This verse alludes to the Ten Commandments in our Torah portion, which begin with an alef, “Anochi (אנכי) Havayah Elokecha” and end with a chaf, “asher l’rei’echa (לרעך). The first letter of the first verse and the last letter of the last verse are the two letters of the word Ach/אך – “May only (Ach) good and lovingkindness follow me.”

Yitro sees how Moses alone judges the entire Nation all day long and he wonders, “Why do you sit alone?…You will wilt away.” Yitro proposes the appointment of an entire system of judges. Moses accepts Yitro’s proposal, and it seems that all is fine.

Why did Moses judge the Nation alone? Simply because he knew G-d’s word more than all the others. He knew the intrinsic truth. The Children of Israel knew this well, which is why they turned directly to Moses. Why should they go to ‘lesser rabbis’ if they can bring their case before the great Rebbe, himself?

As such, Yitro’s proposal is not the best idea, but rather, the best idea under the circumstances. To ensure that Moses would not collapse under the weight of his responsibilities toward the nation, it was necessary to appoint others to help share the burden.

Could it have been possible otherwise? Some of the Chassidic masters say that it could have been possible! If the Children of Israel had insisted and not agreed to the appointment of the additional judges, G-d would have imbued Moses with special energies that would have enabled him to advise and judge everyone. (Or He would have employed a different good solution).  This is how they explain the words of the Sages that Moses did not find “wise people” in the Children of Israel. For if they had really been wise, they would not have agreed to be appointed instead of Moses!

From this we learn that if a person is offered a position, his first reaction should be to refuse. Why me? Surely others are better than I am.

Yitro advised Moses to choose men with four characteristics for the position of judges of Israel: “Men of valor (anshei chayil), fearers of G-d, people of truth, haters of unjust gain”. In the Torah’s description of Moses actually choosing these men, however, only one characteristic appears.  “And Moses chose men of valor from among all of Israel”.

All the above characteristics are important and needed, but Moses prefers to focus and concentrate all of them into the one, most important characteristic: Men of valor. Moses is not aiming for a simply technical system of people with a talent for judging. First and foremost, he wants shlichim, faithful devoted people who will represent Moses and invest their hearts and souls for the good of the Nation.

Men of valor, anshei chayil, also means ‘warriors’. Moses is looking for people who are soldiers in G-d’s army. As soldiers, they completely identify with their commander, Moses himself – a man of valor and self-sacrifice. With this characteristic, they have the ability to be Moses’ representatives to judge the Nation of Israel. As our Sages say, “A person’s shaliach, (representative/messenger) is considered to be like him”.

The Book of Samuel relates that one of King David’s warriors, B’nayahu ben Yehoyadah, was a “Ben ish chai” (‘a man alive’). The kri, however – the way it is

read – is “Ben ish chayil”, “a man of valor”. From this we learn that the men of valor in our Torah portion are also “men alive”. They are men who have unique vitality – alacritous, active and energetic.

One of the pairs of concepts in Chassidut is Chai b’etzem/Alive in essence and Chai l’hachayot/alive in order to give life. Some people’s vitality is concentrated on themselves, while the vitality of others extends and proliferates to others. An ish chayil, a man of valor and life, is a person whose vitality extends to others, chaim l’hachayot.

And now for the awesome gematria: The first letters of all the four characteristics in the verse ("אנשי חיל יראי אלהים אנשי אמת שנאי בצע" – alef, cheit, yud, alef, alef, alef, shin, beit) equal chai (18) times chai – “alive” times “alive”. Furthermore, there are thirty (lamed) letters in the above description of the four characteristics. Add the lamed to the chai (חי) and you get chayil (חיל)!

Yitro: Wednesday: On the Wings of Eagles

“You have seen what I did to Egypt, and I carried you on the wings of eagles and I brought you to Me”. What is behind the unique metaphor, “on the wings of eagles”? Rashi explains that the wings of eagles alludes to the Divine attribute of mercy, similar to the eagle, who carries his nestlings on his back, so that if someone shoots an arrow at him, it will hurt him and not his young. The noble eagle is one of the four figures in the Divine Chariot (in the prophecy of Ezekiel), where it also alludes to the Divine character trait of mercy. Fittingly, the numerical value of nesher, ‘eagle’ equals ‘rachamim rabim’, ‘abundant mercy’.

The eagle is the king of the birds. He spreads his immense wings and flies aloft, securely soaring the skies. On a deeper level, the eagle represents limitless self-confidence. As such, “and I carried you on the wings of eagles” means that G-d took us out of Egypt by infusing us with confidence in Him – employing the character trait of the wings of eagles.

The metaphor of the eagle also appears in the Book of Isaiah: “And those that wait for G-d will renew their strength; they will mount up with wings as eagles; they will run, and not be weary; they will walk, and not faint.” Based on this verse, our Sages explain that when G-d will renew the world, He will make wings of eagles for the righteous, who will soar with them over the water. (Sanhedrin 92B). In other words, in the future, all of Israel (who are all righteous, as is written in Isaiah, “And your Nation are all righteous”) will come to the level of absolute confidence in G-d. This absolute confidence in G-d is the secret of the eternal existence of the Resurrection of the Dead, as in the verse in Psalms, “Trust in G-d forever”.

“And G-d said to Moses, Behold I come to you in the thickness of the cloud so that the Nation will hear when I speak with you and they will also believe in you forever.” This is the third time that the Torah relates to Israel’s faith. The first time is in the Torah portion of Shmot, in response to the message of redemption heralded by Moses and Aaron: “And the Nation believed and heard that G-d had remembered the Children of Israel”. The second time is at the Splitting of the Sea: “And they believed in G-d and in His servant, Moses”. These three verses represent the three stages in the development of faith.

Clearly, faith in Moses reflects faith in G-d, as in the verse, “And they believed in G-d and in His servant, Moses”. This is why Moses is called “Raya m’hemna”, one of the meanings of which is ‘the shepherd of faith’. Moses infuses the Nation of Israel with faith.

Yitro: Friday: The Crown of the Ten Commandments

How do we divide the Ten Commandments into ten? The answer is not as simple as one may think.

The inner dimension of the Torah would naturally parallel the Ten Commandments to the Ten Sefirot. This parallel works very well according to the second division – the division according to portions as written in the Torah scroll. According to this, ‘I am G-d’ and ‘You shall have no other gods’ are together in the sefirah of Keter, Crown. The Keter is Emunah, Faith. These two commandments are the two faces of faith: The positive and the negative.

On a deeper level, Rashi explains the verse in Deuteronomy: “You shall not have other gods before Me” as follows: “In every place that I am – and that is the entire world”. “I am Havayah your G-d” then, pertains to the very reality of G-d, Whose reality is from His essence. “You shall not have other gods before Me,” on the other hand , teaches us that G-d is in the entire world, as the Zohar says, “There is no place vacant of Him”. There is no place in the world that is empty of G-d’s reality. Any thought to the contrary is similar to a thought of  idol worship.

In the language of the Kabbalah, these are the two parts of the Keter, “Atik Yomin” (Ancient of Days) and “Arich Anpin” (Long Countenance). Atik Yomin points to G-d, Himself, exalted and detached from the world. Arich Anpin relates to how G-d appears toward the created worlds.

“You shall make an altar of earth for me…and if you make an altar of stones for me, you shall not build it of hewn stones, for you have raised your sword upon it and profaned it”. In history (or to be more accurate, pre-history) we learn of the Stone Age, which was followed by the Iron Age. The Torah portion of Breishit relates that the manufacture of iron tools began at the second stage (with the children of Cain). Here, with the construction of the altar, the Torah first specifies the primal element of earth, and then the altar of stone – a progression from the Earth Age to the Stone Age. After that, there is a natural will to progress to the Bronze Age and to use it to chisel the stones – but that is forbidden. In other words, development and technological advancement are not necessarily good. Iron can be terribly destructive (like atomic energy in our time). Sometimes, it is best to remain in the Stone Age, in which a person is closer to simple nature.

Iron was not used in the First or Second Temples. There was a very large amount of iron, however, in the materials that King David prepared for the construction of the Temple (as is written in Chronicles). The Lubavitcher Rebbe says that iron will be used in the Third Temple. In other words, human advancement and technology will not come at the expense of natural simplicity, but will support it. “And they will beat their swords into plowshares”, and then iron will be included in the Temple. 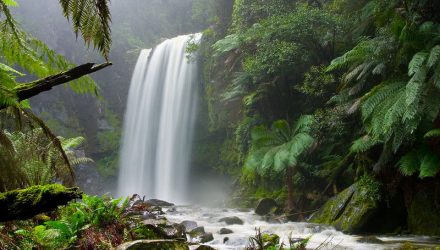 Facing the Mountain Parshat Yitro describes the giving of