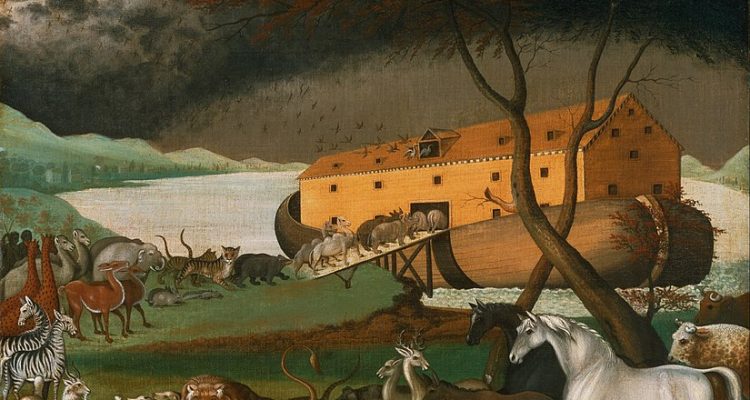 Noach: The Secret of the Covenant

Ma’ayan Ganim: A Chassidic Perspective for the Torah Portion of Noach

However, for all the many covenants God made with the Jewish people, the Tikunei Zohar explicitly says that one of the important anagrams of the word “Breishit” (“In the beginning”), the first word of the Torah, is Brit-aish, meaning, “covenant of fire.” Additionally, the first mention of the word brit (covenant) explicitly in the Pentateuch is in the portion of Noach. We usually remember the covenant that appears after the flood – the covenant of the rainbow, at which time God made a covenant that He would not bring another flood to the world, and promised the existence of the world in general.[2] The concept of brit (covenant) is repeated seven times at this juncture. But the word ‘brit’ appears before that in our Torah portion. As part of the warning of the impending flood and the commandment to Noach to build the ark, God says to him, “And I will establish My covenant with you…”[3]

The commentaries on the Torah bring seven different explanations for the first covenant with Noach[5]. These seven explanations can be paralleled to the seven character traits of loving-kindness, might, beauty, victory, acknowledgment, foundation, and kingdom. Above them, there are three explanations pertaining to the essence of the covenant in general, which we can parallel to the intellectual sefirot: wisdom, understanding, and knowledge.

Loving-kindness (chesed): The Ramban hints (and the author of Haktav V’hakabbalah expands on this) that the first covenant with Noach was forged over the great miracle of “something small that contains something big,” when a sample of all the types of animals and plants, with all that they would need for an entire year, was packed into a small ark. The concentration of this abundant greatness relates to the attribute of loving-kindness, which is overflowing. This is the attribute of Abraham, “the greatest of all the giants.”[6]

Might (gevurah): Rashi brings the saying of the sages that the covenant was “that the wicked people of the generation would not kill him.” Overcoming the wicked people – by means of surrounding the ark with bears and lions (the Hebrew word for “lion,” [אריה] shares a numerical value with the sefirah of “might” [יראה]) is the Divine attribute of might.

Beauty (tiferet): In the book, Ma’asei Hashem (brought in Haktav V’hakabbalah) it is explained that the covenant made with No’ach before the flood was a covenant of the Torah, vital for the existence of the world, as the verse states, “If it were not for my covenant day and night, I would have not appointed the ordinances of heaven and earth.”[7]  The Torah is the “middle pillar,” the sefirah of tiferet.

Victory (netzach): The first explanation given by Rashi (and following the midrash) is that the “covenant was needed for the fruits, so that they would not rot and mold.” This explanation corresponds to the sefirah of netzach, which also means “eternity,” in this case, the power to eternalize what would naturally decompose.

Acknowledgment (hod): According to the Ibn Ezra (and others), the covenant was “that he would not die in the flood—not in the waters of the flood, and not due to all the accompanying hardships that could take place in the ark during the flood [food depletion, attack by wild animals in the ark, etc.].” In hod (a branch of the sefirah of might) there is always the fear that “My splendor [hod] has turned against me to be destructive”[8] and a covenant promising safety is in order.

Foundation (yesod): The Ibn Ezra explains further that the covenant mentioned prior to the flood is a foreshadowing of the rainbow covenant that would be forged after the flood (when a very similar verse was said, “And I will establish My covenant with you”[9]). The covenant of the rainbow is particularly related to the attribute of foundation, one of whose symbols is the bow that shoots the arrows of sperm[10].

In order to understand the concept of covenant in general from the covenant that we are discussing, we will turn to the explanations of 'covenant' that appear in the commentaries here. These explanations parallel the intellectual sefirot: wisdom, understanding, and knowledge.

Wisdom (chochmah): The holy Or Hachaim ties the covenant to memory. Accordingly, the Remembrances that we say in the Rosh Hashanah prayers, which open with the memory of Noach, “And also Noach, You have with love remembered”[12] end with “He Who remembers the covenant.”[13] Humanity fears forgetting and being forgotten. People are afraid to be forgotten (particularly when they reach their golden years, when a person fears being forgetful and also fears that God, Who has helped him until this point, will forget him and throw him aside at the time of his old age[14]) – and the covenant promises eternal memory. The Ark in which Noach pendulates for an entire year is like a drop in the sea of the entire world – the world flooded by the floodwaters. Thus, Noach is apprehensive—despite all the miraculous salvations that he merited—that God will forget him and all those in the ark. The forging of the bond, of the covenant, is a commitment to remember Noach.

Accordingly, Chassidut explains[15] regarding Rosh Hashanah, “the Day of Remembrance,” that the entire world is like a drop in the sea—and much less than that—in relation to God’s Infinite Light (and the infinite worlds that emanated and were created from it). In order to renew the Creation, God’s remembrance must be awakened, so that He will not forget the world, as it were. This remembrance flows from the forging of the covenant (externally, the covenant of the existence of the worlds and internally, the covenant with the Nation of Israel, the Nation of God, who we coronate as King on Rosh Hashanah).[16]

The power of memory relates to the power of wisdom, which is referred to in the Zohar as “the brain of remembrance.”[17] Wisdom is the primary source, the root drop of all reality. The covenant, according to this explanation, is the memory of the original essence and connection to it.

Understanding (binah): Maimonides explains that the covenant is the foundation of the world (without using the word “foundation,” as he does not use the names of the sefirot). He learns this from the Hebrew word for “creation” (bri’ah), which is similar to the word for “covenant” (brit).

The sefirah of understanding illuminates the World of Creation. It is the world in which Imma (the mother figure) is described as nesting, like a mother-bird. The mother builds or creates the formless sperm received from the father into a complete creation, and when it is built, she gives birth to it as an independent creation.

Knowledge (da’at): Rabbi Avraham Ibn Ezra (and additional commentators who base their explanations on the simple meaning of the verses) explains that the word for covenant (brit) comes from the words meaning to sift or to choose (brirah and bechirah). As such it represents the “agreement of two parties to choose something together.” Haktav V’hakabbalah brings lengthy examples from the Bible and the sages to prove that, “my covenant” (בריתי) means, “my choice” (בחירי).

To summarize the intellectual and emotional attributes of the first covenant made with No’ach:

Covenant from Inside Out

The explanation corresponding to wisdom—that covenant is related to memory—relates at its core to the Divine soul, which we remember as it is in its supernal source, as a drop contained in the “brain of the Father,”[20] the sefirah of wisdom.

By contrast, the explanation corresponding to knowledge—that the covenant is related to choice—relates specifically to the body (which is enlivened by the animal soul), in which the Divine soul enclothes itself. Truly free choice can only be between things that appear to be equal, “And you chose us from amongst all the nations and languages,” referring to the physical body that appears, in its physicality, to be like the bodies of all human beings.[21]

The explanation corresponding to understanding—that covenant means creation—stands between the two previous explanations: it is the forging of a covenant with the soul, as it has already become a creation in and of itself, or as described in Kabbalah, “a part of the Creator which has become a created entity.”[22]

Thus, we have before us a process. The forging of the covenant brings out the most internal and essential connection and identifies it (an identification that is between an old memory and a new creation) in external reality, in which it disappears and is swallowed up. This is the meaning of a covenant between two people who love each other. It promises to remember their love even when reality will blur and hide it. On a deeper level, this is also the power of the covenant to give birth—the power to extract the inner essence of the person and to give birth to it in external reality.

Prior to the appearance of the light of Abraham, the characteristics and good traits of Israel were present (but, mostly concealed) among the nations of the world. It is only when the nation of Israel (the offspring of Abraham, Isaac and Jacob) were chosen that they received those traits and were able to retain them. Moreover, until the time of the patriarchs, and to a degree, until the Giving of the Torah, these Divine traits were purely on a soul level (and thus could not be passed down from generation to generation). It is only after God chose the patriarchs and in their merit chose their descendants, the people of Israel, that those traits became embedded in the bodies of the Nation of Israel  (and could thus be passed on from generation to generation).

This is the process of the covenant: Remembrance of the primal root and identifying and highlighting it within the physical world, until it becomes clearly natural, a “clear-cut border.”

[2]  See Ma’ayan Ganim vol. 2, Ki Tisah, which explains that the fundamental structure of Worlds-Souls-Divinity, parallels the covenants with Noach, Abraham and Moses.

[5]  All the commentaries are brought together by Haktav V’hakabbalah on the verse.

Print Noach Secret of the Covenant