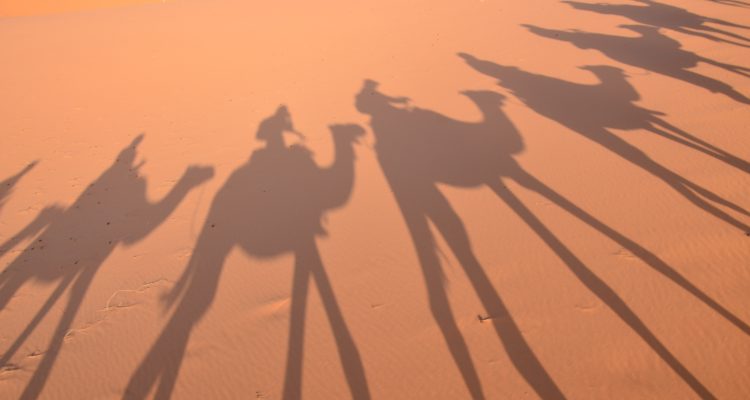 Abraham is always traveling. In the Torah portion of Lech Lecha (“Go for yourself”) the first of the two Torah portions dedicated to the life of Abraham, he begins by traveling to the land “that I will show you”. But it doesn’t end there. Abraham understands that God’s command is for him to always be in motion. When he arrives in the land of Canaan, he continues to walk, “going and traveling south”.

What is the spiritual significance of Abraham’s constant traveling? And where is he going? What is the goal that he is striving to reach?

The second Torah portion about Abraham, Vayeira, means “And he saw”. Along with the sense of walking, the sense of sight is also characteristic of Abraham. Abraham sees visions. Indeed, the entire Torah portion of Vayeira is related to sight. It begins with God appearing to Avraham, then Abraham seeing the three angels, and then seeing again (understanding) that the angels were not approaching because he was feeling weak after his circumcision.

In the story of the Binding of Isaac, the word ‘to see’ appears five times.

The first time is when Abraham starts traveling towards the Land of Moriah and he sees the place God meant from afar. Rashi explains that Abraham recognized the place because he saw a cloud above the mountain. Not just an ordinary cloud, but the cloud of Aaron, the Clouds of Glory, which later accompanied and led the Jewish people in their long journey through the desert to the land of Israel. This cloud that Abraham saw from afar was actually a sign of God’s tremendous love for them.

The second sight is when Isaac asks his father what they will sacrifice and Abraham says, “God will show Him, the lamb to be sacrificed, my son,” hinting that his son is actually the sacrifice. Here Rashi says that ‘show’ indicates choosing, God will choose a sacrifice.

And the Arizal brings us back to the story of Cain and Abel, saying that the initials of “the lamb to be sacrificed, my son (השה לעולה בני) are Abel (הבל), and that this was to rectify Abel’s sin. We all are aware of the sin that Cain committed, but what was Abel’s sin? Abel committed a sin in thought: when God accepted his sacrifice, he looked into the Divine Presence without fear or awe. In order to rectify this sin, Moses, who was Abel’s reincarnation, looked away when the Divine Presence showed itself to him.

The same type of rectification was performed by Isaac during the Akeidah (Binding of Isaac), by doing the opposite. When he was on the altar, about to be sacrificed, he stared into the heavens, into the Divine Presence, but he did this with humility. Abel did this in an improper way, without good intentions, while Isaac looked into the heavens with such self-sacrifice that his soul left his body.

The third ‘sight’ is when Abraham looked up (after being stopped by the angel from sacrificing Isaac) and saw a ram. Abraham freed this ram from the bush in which he was entangled and sacrificed him. The sages say that this ram had been waiting since the creation of the world to be sacrificed by Avraham, and was so eager to fulfill its purpose that it ran towards Abraham, but the Satan created confusion and caused the ram to become entangled in the bushes.

In the next verse come the final two sights: “Abraham called the place God will see, as it will be said today, that on the mountain, God will be seen”.

The Rebbe Rashab once came to his grandfather the Tzemach Tzedek, crying: God appeared to Abraham our father. Why doesn’t He appear to us, too?

His grandfather answered: When a 90-year-old Jew, a tzaddik, decides to circumcise himself, he deserves to have God appear to him.

What indeed is special about Abraham that makes him deserving of such ‘sight’? And what does this have to do with his traveling?

The merit to see Godliness, to see the redemption, comes from the power of faith. Abraham was the first believer, and we can learn from him the power of simple, pure, faith. “And he (Abraham) believed in God, and God considered it a charity.” With every passing day, there was less natural ability for Abraham to have children. Despite this, he believed in God’s words. Faith is our charity to God, as it were. It is something that we can give to God.

After the faith, joy is born. Joy is the key to redemption. It comes from believing that the good will actually come, as the Lubavitcher Rebbe would say, “Think good and it will be good”.

There is a verse in the Bible in which the word “faith” is understood as (the direction) “right”. (On the Biblical map, east is up, west is down, north is left and south is right.) Abraham is on a constant journey south. And we see that the more Abraham travels to the right (south) the more he believes.

Abraham’s initial awareness was based on research and logic. Abraham began to know God through his mind when he was 3 years old. He started with a logical argument about who God is: Not the sun, not the moon, etc. Although his connection to God began with logic and perception, Abraham wanted his connection with the Almighty to be based entirely on faith.

In his youth, the Ba’al Shem Tov once crossed a certain river by employing a Divine Name. Later, he regretted this act, and repented for it his entire life. At the end of his life, he had a chance to cross the same river, and this time he crossed it using only his faith in God.

To cross a river with a holy Name is to ‘grasp’ God – perception – which is the left side. Abraham and Sarah are constantly traveling away from the left and to the right. This approach, of distancing themselves from their origins, is not the highest level. Being able to include the perception of God (the left) with the earnest faith in God (the right) is the secret of the Binding of Isaac.

The secret of the Binding of Isaac is to include the left in the right, as the Zohar says. Abraham goes from trial to trial until he comes to the greatest trial, the Binding of Isaac. During the trial, he still thinks he needs to slaughter Isaac, who personifies the left, the mind. But God disagrees. There is a source for both the left and the right. This is the level of Atik, supernal pleasure. There is no left in Atik, it is all right. There are no harsh judgments there. Abraham is constantly traveling away from harsh judgments, which come along with perception. These judgments cause contraction and Abraham wants to reveal God’s essence, where there are no contractions.

In Atik “it is all right,” meaning that even the left has become right, even the mind is now all about faith. And when the mind becomes faith, it is even more faith than faith. All is right. Even the left is right. And the left becomes more right than the right.

Isaac is the left of the highest world, the world of Emanation. We need the left in order to be able to address every particular detail. In order for the redemption to reach every single Jew, we need a rectified left, like Isaac.

The ram, on the other hand, which Abraham sacrificed, represents the left in the three lower worlds, wanting to run to Abraham, to be included within Abraham. The Satan confuses everything, and the ram becomes entangled in the bushes. But in the end Abraham is able to take him out and sacrifice him to God, rectifying him.

In our journey through life, we should always be traveling south, to more and more faith, to reach more loving-kindness, more love of Israel, less judgments on people, more revelation and less contraction. May we attain true faith and from that, the joy of redemption.

Photo by Danielle Barnes on Unsplash