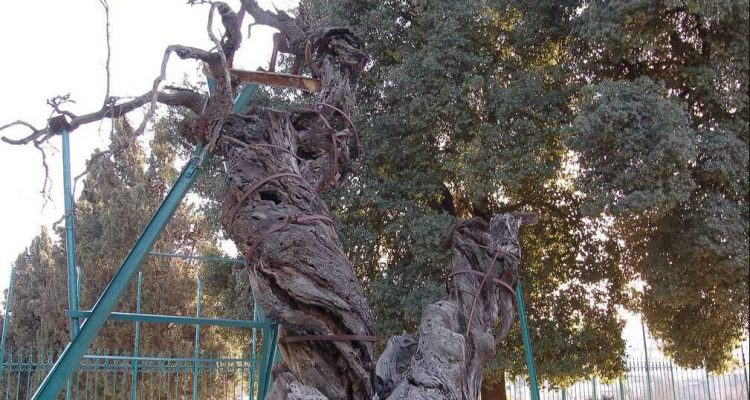 Abraham’s first (and main) life mission, which began with the Divine directive to go forth, “Lech Lecha,” is completed and crowned with success in our Torah portion, with the verse, “And he planted a tamarisk tree (eshel) in Be’er Sheva and he called there in the Name of Havayah the eternal God.”[1] Abraham, “the head of all believers”[2] publicizes the faith in One God and brings God into the human conversation.

What is the connection between Abraham’s calling in the Name of Havayah, the eternal God and his planting an eshel, as per the beginning of that verse? The simple meaning of this expression is that Abraham planted one tree (mentioned because it was highly visible and significant, serving as a sign[3] or marker for a place or event[4]). The sages, however, go on to explain that the eshel is actually a large orchard of all types of species (“figs, grapes and pomegranates”[5] and even “all sorts of delicacies”[6]).

Chassidut[7] explains that the verse relates to many trees of different species in the singular form due to the unity that manifests in them – the unity of the World of Emanation, in which all is One and wholly conscious of its Divine origin. This is the essence of Abraham’s power )“Abraham was one,”[8] “For I have called him ‘one’”[9] ) – to herald faith in the oneness of God through his war against the pagan worship of a plethora of idols and to manifest the oneness of God in a world that appears to be split into myriad details.

There are three explanations in the Midrash as to the nature of the eshel mentioned in our Torah portion[10]: An orchard (in which we count three types of fruit: “Ask what you will ask,  (she’al mah shetishal, in Hebrew, the same root as eshel) figs and grapes and pomegranates,” as above), an inn and the Sanhedrin (which is inferred from the verse, “And he sits on the hill beneath the eshel in Rama”[11] – that the royal presence of Shaul in Giv’ah was in the merit of Shmuel’s court of Jewish law in Rama).

As above, in their explanation of eshel as an orchard and as an inn, the sages refer to the common root between eshel and she’al, which means to ask or request. In Hebrew, this request also refers to a request in prayer, as in the verse, “One thing do I request of God, it is that that I seek”[12]. In keeping with this explanation, one of the meanings of “the eshel in Be’er Sheva” according to Chassidut[13] is the “ladder on earth and its top reaches heaven”[14] – the ladder of Jacob – the legs of which are set firmly[15] in Be’er Sheva while its top reaches heaven in Beit El.[16] The Zohar explains that the “ladder is prayer.”[17]

Be’er Sheva is the “point of Zion”[18]  – the innermost point of the heart – from which prayer wells forth. When Abraham planted the eshel, he was planting that innermost feeling that we can ask anything of God, and there is nothing that can stop Him from fulfilling our request.  When guests would finish their feast at Abraham’s eshel (inn), he would ask them to thank God for the food that they had eaten. Abraham’s eshel was the foundation of his educational project: Planting in his guests the consciousness that they can ask anything of God, leading them to ultimately recognize God’s goodness and thank Him. (This is also how we can explain the order of prayer: praise, request, thanks.[19] The praise expresses faith in the all-powerful God, which is translated into the heartfelt emotion of request, which is the essence of prayer. This is followed by thanks for God’s goodness).

Can we Ask Questions?

The Hebrew word for “question,” “she’ailah” (cognate to eshel, as above), can also mean “to investigate.” When we ask questions about God, we need deep, clear answers. As a rule, above the revealed and known dimension (the revealed world, which corresponds to the sefirah of Kingdom) there are levels at which we can investigate, ask and even merit answers (an aspect of “the honor of kings is to investigate a matter,”[20] which corresponds to the attributes of the heart). There are levels at which we can ask (the secret of “מי’ דקיימא לשאלה “, relating to the sefirah of Understanding) but not expect an answer. And then there are levels (from Wisdom and up) at which we cannot ask at all (the aspect of “The honor of God is to conceal a matter”[21]).

From this structure, it is clear that the question that will merit an answer is specifically a question that wells forth from the heart. Chassidut, which translates all the secrets of the Torah – including the loftiest secrets – into practical steps of service of God, encourages us to always ask. Chassidut explains that “Ask please about the first days”[22] also refers to the loftiest and most concealed, deepest levels. At each level, the question relates to the attributes of the heart included in that level and the answer is relevant to man’s service of the heart.

When Abraham began to investigate in his mind “Who is the master of the world”[23] and discovered that it is always possible to delve deeper and deeper, he planted in humanity the Jewish urge to ask questions (including those questions that are ‘forbidden to ask’[24]). His questions led him – and paved the way for us – to infinitely deepen our love and service of God through contemplation and questions. And we can always delve even deeper.

[7]  See the Or Hachaim on this verse, as well as Pelach Harimon and Magen Avot.

[15]  The Hebrew word for “set firmly” is nitzav, which in Aramaic also means “to plant.”

[18]  See Be’er Mayim Haim ad loc,  which explains that “sheva” refers to the seventh sefirah, the sefirah of Malchut and “Be’er Sheva” is its attribute of Foundation, the point of Zion, which is a well that elevates feminine waters. (There are additional explanations in Chassidut, according to which “Be’er Sheva” is the attribute of Understanding, the source of the seven attributes, or the attribute of Kingdom as it descends to the World of Creation, the source of the seven chambers of the World of Creation. Of course, “All of these explanations are the words of the living God”).

Abraham is the great negotiator of trials. He is the chief of all believers. In the Torah portion of Vayeirah, he faces the tenth and most difficult

“Such is the way of