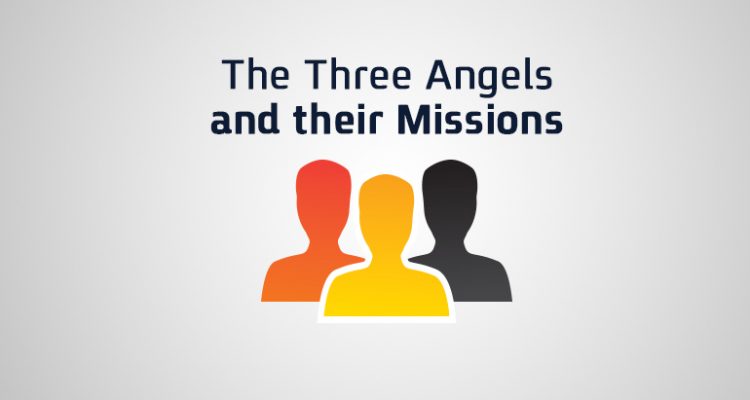 Vayeira: The Three Angels and their Missions

Imry GalEinai Mar 13, 2014
29
SHARES
ShareTweet
This article may contain special characters or charts. To view it correctly, you can select the PDF version of this document by clicking here. (You can also download the PDF version of this document by right-clicking on this link and selecting "save link as…").If you do not have Adobe Acrobat Reader and cannot view PDF files, please go here and follow the instruction to install this free software.

Vayeira: The Three Angels and their Missions

Our insights into parshat Vayeira will focus on the three angelic visitors that appear to Abraham three days after his circumcision and then continue on to Sodom to destroy it and save Lot, Abraham’s nephew. Undoubtedly, one of the most interesting topics to those interested in spirituality is angels. What exactly are they? How do they function? What is their role?, etc.

In this article, we will focus on a well-known limitation of angelic action: one angel cannot perform two missions. Seemingly, for this reason, three angels were sent to Abraham in order to perform three different missions. This limitation may surprise many people because it means that angels have been delegated a very one-track existence. An angel, a true messenger of God, cannot veer left or right. It is always committed to fulfilling its purpose, but that purpose is relatively more simplistic than the purpose of a human soul.

In any case, the definition of what constitutes a mission (to which an angel cannot add another mission) will be our topic today.

The second verse of our parshah reads:1

And he [Abraham] lifted his eyes and gazed, and behold, three men were standing before him; he saw, then he ran toward them from the entrance of the tent and prostrated himself to the ground.

One [man] to bring the news [of Isaac’s birth] to Sarah, and one to destroy Sodom, and one to heal Abraham, because one angel does not perform two missions. This is understood because throughout the entire narrative, scripture refers to them in the plural: “they ate,” “they said to him.” But, when the news [of Isaac’s impending birth] was given it says: “He said: ‘I will surely return to you.’” And when Sodom was destroyed, it says: “For I will not be able to do anything” and “I will not destroy.” And Raphael, who healed Abraham, went from there to save Lot. This is also in accordance with the verse: “It came to pass that when they took them outside, he [the angel] said, ‘Flee for your life.’” From all of this it is apparent that only one [of the angles] acted as a deliverer.

On this same subject, in the Talmud we read the following:

And who were these “three men?” They were Micha’el, Gavri’el, and Repha’el. Micha’el came to bring the news [of Isaac’s birth] to Sarah; Repha’el came to heal Abraham; Gavri’el went to destroy Sodom. [Asks the Talmud:] And yet it says “The two angels came in the evening to Sodom” [so there were two, not one who went to destroy Sodom]? [The answer is] that Micha’el accompanied him [Gavri’el] in order to save Lot. And this [that only Gavri’el destroyed Sodom] can be gleaned from the verse that says: “And he destroyed these cities,” and it does not say “And they destroyed.” Learn from this!

The Tosafot, the medieval collection of commentaries on the Talmud write in their gloss:

“He who went to save Lot.” This is perplexing, for in Bereisheet Rabbah it says that a single angel does not perform two tasks. We must therefore say that here Micha’el performed only one task when he came to bring the news to Sarah. And when he left [Sarah] and went to Sodom, a new task began; in one place an angel does not perform two tasks.
Now, in Bereisheet Rabbah it says that the angel that came to save Lot was Repha’el, and the healing of Abraham is not accounted for. But, even if he [Repha’el] came also to heal Abraham, this would still be considered a single task, because healing and saving are considered the same matter.
Our master, Rabbi Elchanan raised a difficulty: From the verses it seems that there were two angels involved in saving him [Lot]. It says: “And the men held his hand,” and it says “they took him out and left him outside the city.” And only later does it say that the angel that came to destroy Sodom said to him: “For I will not be able to do a thing until you get there [to Tzo’ar].” So we have to say that both of them [Micha’el and Gavri’el] took him out of the city; Micha’el escorted him to Tzo’ar and Gavri’el urged him to make haste.

To further understand the point behind the two opinions on which angel saved Lot, let us now turn to the Maharal in his commentary on the Torah (Gur Aryeh). We will quote from his commentary somewhat in length and then take a few moments to focus on his main point. The Maharal’s commentary always begins with Rashi’s words. In this case, the Maharal focuses on Rashi’s statement: “…Raphael, who healed Abraham, went from there to save Lot….” He writes:

These words are difficult, for an angel cannot perform two tasks.

There are those who say that once the angel has completed one task, it can go on to perform a second task. But this is incorrect. Because if it were so, it would have been enough for God to send two angels [instead of three]—one to heal Abraham and one to give the news of Isaac’s birth to Sarah—and then the two of them could go on to perform another task each.

Then there are those who say that healing and saving are the same matter. But, this too is a difficult opinion, because in the Talmud it says that it was Micha’el who had given Sarah the news was the one who went to save Lot. But, clearly, giving news and saving are not comparable.
Therefore, it seems that we have to say that there are three categories of tasks involved here, and it is of these categories that we say that one angel cannot perform two categories of task.

The first category is pure loving-kindness, pure goodness. The second category is pure judgment and negativity, which is required to destroy and annihilate. And, the third category is like a median between the first two; it balances them by sustaining everything in a natural fashion, in the normal manner of the world.

Now, in order to give the news to Sarah about the impending birth of Isaac—actually to open her womb, as she had been sterile until now—for this, one angel was needed. To destroy Sodom, there was one angel, which was responsible for complete death and destruction. And, to heal Abraham so that he may continue to live, this is neither total goodness nor total destruction, it is simply sustaining the normal course of nature. Because these three tasks involve different categories, therefore we say that “one angel cannot perform two tasks,” because one could not take on the task of another.

Therefore, it was the angel that came to heal Abraham that went to save Lot, because saving is merely sustaining life, the person [Lot] is already alive and by saving him, he is kept alive. This is neither an act of pure loving-kindness nor an act of pure destruction or annihilation. [This explains the Rashi who says that it was Repha’el who both healed Abraham and saved Lot]

But, now the Talmud says that it was Micha’el was the one who went to save Lot, and it is correct to say this, because Lot was saved by the merit of Abraham, as the verse says: “And God remembered Abraham [and he saved Lot from the destruction].”2 So it was in relation to Abraham that this kindness of saving Lot was performed, therefore, saving Lot cannot be considered simply sustaining life.

But, the opinion of Bereisheet Rabbah, that it was Repha’el who saved Lot, is based on the notion that saving is similar to healing, because saving is also saving from some calamity, which does not necessarily strike everyone. But, Micha’el who gave Sarah the news of the upcoming birth, this was an act of free loving-kindness. And this is the point of their contention.

Angels and the Sefirot

It is known that in Kabbalah, the three angels Micha’el, Gavri’el, and Repha’el correspond to the sefirot of loving-kindness, might, and beauty, which are represented by Abraham, Isaac, and Jacob. So let us now see how indeed each of the angels performed a task that corresponds with its sefirah.

Our parshah begins with Sarah being informed that she will beget Isaac. Everyone agrees that it was the angel Micha’el that was the messenger for this task. Micha’el is also considered the advocate of the Jewish people. Every nation in the world has a particular angel that is its spiritual minister. The ministering angel of the Jewish people is the angel Micha’el. Indeed, Sarah’s name in Hebrew stems from the same root as “minister.” Chassidut explains that the power of procreation is the embodiment of the infinite capacity of the Almighty within the human being. By making our first matriarch and patriarch fertile, Micha’el performed the ultimate task of loving-kindness, as the sefirah of loving-kindness represents a state of no limits (infinite, as such). There is no greater loving-kindness than to make the bounded vessel of a sterile man and woman, unbounded and able to give birth.

Gavri’els mission, to destroy Sodom is clearly an act revealing tremendous might. Its relationship with Isaac is that Isaac’s name in Hebrew literally means “he will laugh.” Isaac’s inner experience is one of rejoicing.3 As the verse says, “when the wicked are destroyed, rejoice.”4

Rapha’el in Hebrew stems from the root רפא , meaning “to heal.” But רפא also permutes to spell פאר , the root of the name of the sefirah of beauty, תפארת , the sefirah of Jacob.

Angels and the patriarchs

Since Isaac and Jacob (and their essence as the archetypal souls corresponding to might and beauty) were still in potential in Abraham’s procreative energy [and even Abraham’s own essence as loving-kindness had not yet been fully revealed] the revelation of the three angels illustrated for Abraham what his offspring would be like. As the verse says: “For, within Isaac, you will find your seed.”5 The word “within” limits Isaac, for of Isaac’s sons, only Jacob is considered to be the seed of Abraham. And all three patriarchs were represented by the angels that came to visit Abraham.

This connection and correspondence between the angels and the patriarchs is illustrated beautifully in gematria. There is an important principle in the mathematical analysis of the Torah that square numbers, wherever they are found, represent a consummate wholeness. If we add the names of the patriarchs to the names of the three angels, we get:

Where the 6 here suggest the 6 names whose sum we have calculated.

Lot and his Daughters

One of the most mysterious events documented in the

Walking and Seeing Abraham is always traveling. In the

What were the angels getting at when they asked