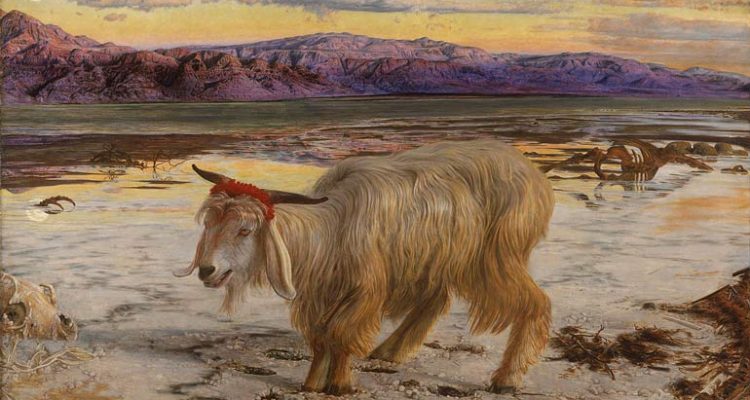 The portion of Acharei-Mot describes in detail the service of the High Priest in the Temple on Yom Kippur. One unique act in this service is sending the scapegoat to Azazel. The scapegoat carries away the sins of the entire Jewish people. Complete atonement on Yom Kippur depends on it.

Nowadays, sacrifices in general are a foreign concept. The scapegoat seems even stranger. Indeed, even in the Temple services it is exceptional.

The Strange Goat that is not a Sacrifice

Later in this portion of Acharei-Mot, we are strictly warned against sacrificing animals outside of the Temple. All sacrifices must be offered up on the altar, “before God.” Yet, the scapegoat is banished outside the Temple, to the desert, without any of the regular sacrificial ceremonies. Unlike other sacrifices, banishing the scapegoat does not have to be executed by a kohen. It is permitted even by a regular Jew. The Jerusalem Talmud states that the goat did not always die but would sometimes escape to the desert. Rabbi Abraham Ibn Ezra states clearly, “[The goat} that is banished is not a sacrifice.”

But, if it is not a sacrifice then what is it? Why does atonement on Yom Kippur depend on it?

There is a list of religious acts enumerated by the sages that are questioned by the non-Jewish world. The scapegoat is one of them. Banishing the goat seems to be like the acts of the idol worshippers described later in the portion, “They shall no longer slaughter their sacrifices to the satyrs after which they stray.” The Hebrew word for “satyr” (שְׂעִיר) and “he-goat” is identical. Yet, clearly God did not command us to sacrifice the goat to some imaginary satyr in the desert.

What then is the secret of this strange goat?

A Gift from the King to Bribe His Servant

In his commentary, Ibn Ezra left cryptic hints regarding the nature of the scapegoat. Nachmanides, somewhat apologetically, deciphered his riddles. He explains that this goat is a gift from God to “the minister who rules over places of destruction.” We bribe the powers of evil so that they too will advocate for the Jewish people. Therefore, explains Nachmanides, the scapegoat is initially brought before God and its fate is sealed by a Divinely-ordained lottery. This teaches us that we are not serving the unholy forces, but doing God’s will. Like a king who gives a prize to his servant, God rewards the powers of evil for giving us the opportunity to overcome them.

For those who try to grasp the Torah from a rational perspective and wish to escape from any whiff of Torah secrets, this explanation is not easily digested. The scapegoat remains exceptional. What is meant by “bribing” the evil forces, especially on Yom Kippur, the holiest day of the year?

The Chassidic masters translated the secrets of the Torah into psychological terms. This gives them practical significance in our service of God. The following explanation is cited in the name of the Ba’al Shem Tov:

“There is no righteous man on earth who does good and does not sin” This means that the good that he does is never clear of self-interest or sin… for when he does good without any evil, the evil inclination provokes him. Not so when the evil inclination sees that there is some evil interest in the deed, he leaves him and walks away.

Ignoring and denying the evil that is inside us will eventually lead to it showing its great strength by provoking us. The principle service of Yom Kippur is confession. Throughout the day, we confess our sins numerous times. We admit that we are “a vessel full of shame and disgrace.” Acting with lowliness by admitting that there is a piece of evil in me, causes it to leave me and walk away.

Even as we are about to sincerely perform a mitzvah, we must admit that we have ulterior motives. Practically speaking, the Ba’al Shem Tov advises us to note the personal enjoyment that we will gain by doing the mitzvah. Only once we have confessed that our habits are not for the sake of Heaven should we attempt to do it for Heaven’s sake.

If, for example, I want to get up at midnight to study Torah and to pray, I should not say to myself “I am going to overcome my nature and break the evil inclination altogether!” I should think of the hot coffee that I will make for myself when I awake. Then, over a steaming cup of coffee, I will be able to concentrate without the evil inclination interfering with my Torah study. By doing so, I acknowledge the existence of the evil inclination, and I give it its reward. Then, I am released from its grip and I can banish it to some forsaken corner so that it will no longer disturb me.

Sending the Evil Inclination to Azazel

This advice serves as an explanation for bribing the “other side” on Yom Kippur. The powers of evil, “the minister who rules over the places of destruction,” dwells within us, “He is the Satan, he is the evil inclination.” As we approach God to purify ourselves and to atone for all of our sins on Yom Kippur, the holiest day of the year, we must not deny the existence of evil. It has its place in the world, but we should not become enslaved by it, God forbid. We must admit that God “creates evil.” Evil is God’s servant whose task is to seduce us.

Evil floods our consciousness from the abysses of the soul. We must turn to that bold-faced satyr, and say, “Yes, you exist, kicking and head-butting us, but you have no place with me here. Go to the desert, your natural habitat, beyond settled land. Go to Azazel and leave us in peace!”

On Yom Kippur we take this attitude to its limit. We confess all our sins and expose all the evil. Then, we banish it from the face of the earth. In this way, we become pure, as the Mishnah states, “a ribbon of scarlet wool was attached to the entrance of the Temple and when the scapegoat reached the desert, the ribbon would turn white, as it says, ‘If your sins are scarlet, they will become as white as snow.'”

To conclude, there is a Chassidic saying that states all this concisely, “the no-good (the evil inclination) is in all of us. The scapegoat sent to Azazel is one of the Temple services. Since there is no-good in the world, it must be sent to the precipitous land.”

May we merit to banish all the no-good that is within us and to send the scapegoat to Azazel.

In the tension between the

In his Sefer Hamidot, Rebbe Nachman

Restoring the Lost Crown and t...

“And the ransomed of God