Behar: Sunday: A Gift for the Bride

This is a law with practical application. For example, if you have a choice whether to hire a Jewish worker or a non-Jewish worker for renovations, prefer your brother. This actualizes the mitzvah of “Love your neighbor as yourself”, which is a “great rule in the Torah.” This law applies in all places and at all times, as, for example, the Chafetz Chaim wrote (in his book, Ahavat Chesed). Today, in the Land of Israel, this is a double mitzvah, the special beautification of a mitzvah that our generation has merited.

What if hiring Jewish labor is the more expensive option? Up to a certain difference in price, we are still expected to pay more to the Jew. (The lenient opinion in Jewish law is to pay an additional 15%). The main goal, however, is not to relate to this as a heavy legal burden, G-d forbid. Instead, we must be happy for the opportunity to strengthen the brotherly love, friendship and feeling of responsibility for one another. This is reflected in the acronym of the letters that spell out the number of this year, 5778/ תשע"ח : תהא שנת ערֵבים חברים./It will be a year of mutual responsibility and friends.

Behar: Tuesday: Blessing of the Land

“And the Land will bear its fruits and you will eat to satiation and you will live in security upon it…and I will command My blessing.” Our Torah portion began with “And G-d spoke to Moses at Mount Sinai, saying…When you come to the Land”. There is a direct connection between Mount Sinai and the Land of Israel, which is blessed with goodness. In the merit of the Torah, we reach the Land of Israel.

The move from Mount Sinai to the Land of Israel is written in the phrases of redemption that were said during the exodus from Egypt: The fourth phrase is, “And I will take you unto Me for a nation”. This verse refers to the Giving of the Torah at Mount Sinai. The fifth phrase is, “And I will bring you to the Land”. The four phrases of redemption parallel the four levels of the soul: Nefesh, Ruach, Neshamah, Chaya. The fifth phrase parallels the loftiest level, the “Yechidah in the soul”.

Mount Sinai is in a desolate desert, a place of “chaos” and destruction. The Land of Israel, on the other hand, is settled. In the phraseology of the Kabbalah, this is the difference between “The World of Chaos” and “The World of Rectification”. The World of Chaos contains tremendous power of “abundant lights” that do not manage to settle in appropriate vessels. It is only in the World of Rectification that the lights settle and integrate well into broad and appropriate vessels. The word “Behar” (the name of this Torah portion) alludes to bright/bahir. light. The new, innovative thought is that the blessing of the good Land begins with the great lights of Mount Sinai. These lights descend in order to become actualized in the broad vessels of the physical blessing of the Land of Israel.

Behar: Wednesday: Who is the Redeemer?

“And if your brother becomes poor and he sells part of his lands, and his redeemer (go’alo/ (גאלו , who is his kinsman, shall come and redeem  (v’ga’al/ וגאל ) that which his brother has sold”.

Let us open with some calculations: Until our Torah portion, Behar, the root for ‘redeem’, ga’al/גאל appears in the Torah only three times. In Behar, it appears 19 times, the highest concentration of ga’al/redemption in the Torah portions. The next in line is the portion of Behukotai (often read together with Behar), in which ga’al is written 12 times. Together with Behar, the root ga’al appears 31 times in these two final portions of the Book of Leviticus. These numbers reveal a beautiful allusion: The root ga’al appears 34 (the numerical value of ga’al) times in the Book of Leviticus. The appearances are divided into ga’al/ ג-אל (3 plus 31) times . If we count the appearances of ga’al in the entire Torah, we will find 45 appearances, the numerical value of geulah/redemption!

In the entire Bible, the greatest concentration of the root ga’al is in the Scroll of Ruth (which we will read on the upcoming holiday of Shavuot). In the 85 verses of Ruth, the root ga’al appears 23 times. 23 is the midpoint of 45, clearly relating to it.

In our Torah portion and in the Scroll of Ruth we learn that the kinsman is the preferred redeemer. He has the first option to purchase-redeem the field, as Boaz says to Ruth, “If he redeems you, good, let him redeem, and if he does not wish to redeem you, and I will redeem you.”  This is an important allusion to the redemption of Israel: The redeemer-kinsman of Israel is the tzaddik. In other words, the redemption of Israel materializes when they merit the redemption –when they are righteous and immersed in Torah. Similar to the Scroll of Ruth, however, it is possible that the redeemer-kinsman does not want to redeem. We do not find favor in his eyes, we look distant and unkempt…At that point G-d comes and says, “…and I will redeem you”. I, Myself, will redeem you, without looking at your outward appearance: “For My sake, for My sake, I will do it.”

“And if your brother becomes poor, and his means fail with you, and you shall uphold him, as a ger toshav, and he will live with you.” What is a ger toshav according to Jewish law?

In brief, a ger toshav is a non-Jew who believes in the Torah of Moses and keeps the 7 Noahide laws. Today, there are many Noahide Righteous Gentiles in many places in the world. But the concept ger toshav specifically refers to a non-Jew who lives (gar, cognate to ger) among us in the Land of Israel. The Nation of Israel is obligated to his well-being and welfare (as part of the mitzvah of tzedakah/charity).

A ger toshav can be accepted when the Nation of Israel lives in its complete inheritance and when the Jubilee is in practice.  At that point, we can absorb and properly integrate the ger toshav. We have not yet reached this point.

These principles guide us in the comprehensive plan for “Rectifying the State of Israel” (This book, by Rabbi Ginsburgh, is available at https://www.amazon.com/Rectifying-State-Israel-Teachings-Kabbalah/dp/9657146054). It is important to clearly define the desired situation and to progress toward that goal, with G-d’s help.

Behar: Friday: I am the Servant

“For they are my servants, whom I took out of the land of Egypt”. We are all servants of G-d, as it says in the Ten Commandments: “I am Havayah your G-d, Who has taken you out of the land of Egypt, of the house of bondage.” Previously, you were slaves to Pharaoh, and now you are servants of G-d – exclusively. This explains the severe approach toward a person who chooses to be a slave, “He buys a master for himself”.

We are servants of G-d, but we are also His children: “You are sons to Havayah, your G-d”. I must look at myself mainly as a servant, and relate to every individual Jew mainly as G-d’s child. Even if an individual is not acting as a child of G-d, I must remember that “One way or the other, they are called children (of G-d)”.

Fittingly, the numerical value of ‘I am a servant’/אני עבד  equals ‘Every Jew is a son’/ כל יהודי בן  (It equals ‘Kabbalah’ as well).

Behar: Shabbat: The Servant of the King

“For to Me the Children of Israel are servants, they are My servants, whom I took out of the land of Egypt, I am Havayah your G-d.”  This verse is very similar to the verse in yesterday’s portion, but more complex. What is the meaning of being the servant of G-d?

The initial feeling in the soul is submission: The world is not mine, who am I and what am I, nobody owes me anything. It follows that it is fitting to be a servant of the One to Whom everything belongs, the true Master (and “Whatever the servant bought, his master has bought”). This is the beginning of our verse, “For to Me the Children of Israel are servants”. In one word, a servant.

Following this submission consciousness, comes the stage of separation: I am not just any old servant. I am the “servant of the King”, in the words of our Sages. Instead of looking at myself (from my submission consciousness), I give my attention to the King. He is the King of all kings; the entire world is filled with His glory. The King is holy and separate, and separated us from the nations of the world to be a treasured nation unto Him. This is the middle of our verse:”…they are My servants, whom I took out of the land of Egypt”. I am filled with a feeling of consummate joy at the great privilege to be a servant of the King of kings.

Following the separation consciousness comes the state of sweetening: Our Sages say, “The servant of a king is a king”. The servant so completely identifies with the King that he is thought of as the King, Himself. Like the King, he can even issue decrees, “A tzaddik decrees and the Holy One, Blessed Be He fulfills it”, say our Sages. In Hebrew, the word for ‘king’ is melech. The root word melech can also mean nimlach/to consult. Our Sages say that G-d consulted with the souls of the tzaddikim as to whether to create the world. They are His partners, and the pre-Creation eternal light manifests in them. This is the end of our verse: “I am Havayah your G-d.”  I am your G-d and you are also called G-d, as in the verse in Psalms 82, “I said that you are Elokim” ( the Name of G-d that appears in the plural, a spark of which is manifest in every Jewish soul). 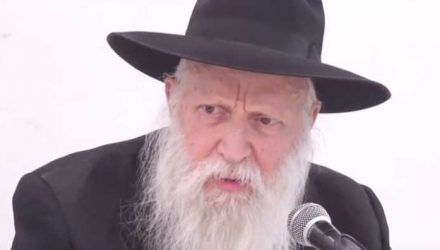 Abraham, Isaac, Jacob and the Forefathers of ...

In this video clip, Rabbi Ginsburgh draws parallels between the three Jewish Patriarchs and the three forefathers of Chassidut.