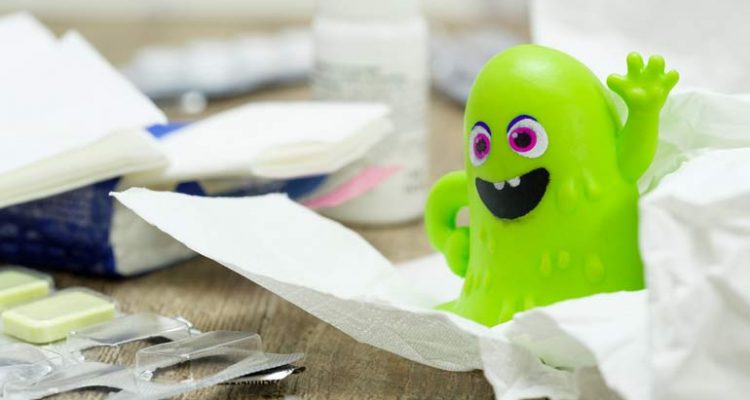 The two portions of the Torah, Tazria-Metzora deal with the laws concerning צרעת, tzara’at, a skin disease that required the afflicted person to separate from the community until he was completely healed. The Hebrew word for “disease” in this context is נגע, however, this root also has an apparently different meaning, as the root of the word “to touch.” Although these two meanings seem to be completely different, since Hebrew is the Holy Tongue, the fact that they share exactly the same root cannot be mere coincidence. Let’s see what the connection is between these two words.

Disease is a negative phenomenon, and most of the references to touching in the Bible are also negative. For example, in the laws of impurity in the portion of Metzora in which the expression “anyone who touches…  will become impure.” In fact, the first time this verb appears in the Torah is in the negative commandment not to touch the Tree of Knowledge. But, why should physical contact be considered something negative?

In Jewish law, another use of this very same root is when someone has a personal interest or bias concerning something, which could disqualify him from bearing witness in a law case. Similarly, in Chassidut, any personal quest in a person’s service of God is called נגיעה, from the same root.

This idea teaches us that negative contact is when a person touches someone or something for his own personal interests. This is most true when a person wants to feel touched, a desire which, when overemphasized, may even bring him to touch himself in an exaggerated fashion. This type of self-contact is the source of what is referred to as, “the flaw of the circumcision,” which leads to types of contact that are prohibited by Torah law instead of positive relationships. This is why these diseases appear in the Torah portion which begins with the phrase, “When a woman bears seed,” and concludes with the laws of the diseases that appear with other types of impurity, including the impurity of intentionally wasting male seed. The Hebrew word for seed in both these cases is זרע, which is closely related to the word צרעת, tzara’at, the skin disease mentioned above (the letters ז and צ are interchangeable as they are both pronounced through the teeth). When a person harms himself spiritually by prohibited contact, he is liable to be afflicted on his skin – the very same organ that took illicit pleasure in the act of contact.

The sages teach us that the major cause of tzara’at is illicit speech. In Kabbalah, the tongue, the organ of speech, is related to the procreative organ. There is an essential need “to circumcise” our speech. The tongue is the conveyer of our inner communication through speech. It is liable to be flawed through idle chatter or through various types of prohibited speech that “touch” our friends and acquaintances in painful or harmful ways. Once more, it all begins from the fact that a person has self-interests and puts his own ego in the center of things. Putting the ego first is indicated by the fact that the root נגע, meaning “to touch” (in the sense of “disease”), appears in these portions of the Torah 61 times, the numerical value of the word אני, “I” – the ego.

Not every form of contact or touch is evil. There is a very positive form of touch – the caring touch of true empathy, when an individual “takes things to heart” in a positive way. The verse that most expresses this type of positive touch appears with reference to King Saul’s followers, “And the soldiers went with him, those whose hearts had been touched by God.”[1] These people had no need for superficial accomplishments by the newly chosen king. God’s word had touched them at some inner point of their hearts and they immediately recognized their king and followed him.

The rectification of undesirable contact begins with complete abstinence from any contact. An individual afflicted with tzara’at must separate from the community until he is healed, warning everyone that they are not to come near him. The rectification continues by nullifying the ego, אני, until it becomes nothing, אין (a permutation of the same letters). In place of the egocentricity that demanded its place in the limelight, we need modesty and humility to refresh the soul with the quality of selflessness. This is alluded to by the purification ceremony that the afflicted person must undergo. In order to complete his healing process, he takes the log of a cedar tree, representing his previously lofty egocentricity. The scarlet thread and the bunch of moss represent his newly acquired humility.

Yet, the ultimate rectification comes as a result of utilizing the power of touch itself in a positive fashion. His initial egotistic self-interest caused him to use his sense of touch for illicit contact. Now, after it has been reduced to a state of nothingness, his healthy sense of positive touch returns. Once I can feel reality touching my heart, I can resume social and personal contact in a rectified manner.

The disease of tzara’at appears uniquely in some of the greatest leaders of Israel. Moses’ hand turns as white as snow (for a few moments) with tzara’at,[2] and the tzara’at of his sister, Miriam the Prophetess, is a sign for all generations to remember.[3] Most surprising is that Mashiach, the final redeeming king of Israel, will initially be inflicted with tzara’at, as the Prophet Isaiah states, “And we thought him to be inflicted, plagued by God and tortured,”[4] and as he is referred to in the Talmud as “the pale student of Rebbi’s school”[5] (i.e., white as a result of tzara’at).

Mashiach is afflicted by tzara’at because he constantly senses the illness of the Jewish people – the pain of the exile. He is deeply touched by the current state of the Jewish people. This is a positive sense of touch that results from his concern for the Jewish people, whose hearts have not yet been “touched by God.” Mashiach suffers greatly, “Indeed, our sickness has he borne and our pain has he suffered.”[6] Every Jew has a spark of Mashiach. At the point of our souls, each of us is deeply concerned by the ongoing exile of the Jewish people. If all of us would connect to that point of our souls, all of the afflictions would be transformed into positive contact. When all the individual sparks of Mashiach are revealed, the specific soul of Mashiach will be empowered by the revelation and he will be revealed as the ultimate redeemer of Israel and of the entire world. “Today – if you listen to His voice.”[7]