In practice, Maimonides’ legal ruling is that there is no difference between these four types of tzara’at. For example, if half the afflicted area is baheret and the other half is se’et, they are considered one afflicted area according to Jewish law. Nonetheless, Maimonides emphasizes, in order for the priest to be worthy of determining if a particular affliction is tzara’at or not (in order to decree that it is pure or impure) he must be able to distinguish between the different types.

In other words, the theoretical distinction is important, despite the fact that it has no apparent practical application. This holds true for Torah learning in general: Often, we can be engaged in a Torah topic that does not seem to have practical application. Nevertheless, there is great value in the study itself, in which we connect to G-d’s pure wisdom.

Another important lesson to be learned from this: In order to rectify reality, we must be able to distinguish between its flaws-afflictions. Sometimes, it may seem like a purely theoretical distinction, but this is also important and necessary. Ultimately, the purpose is to purify and lavish lovingkindness. After the priest’s decree of ‘impure’, a process of rectification begins, which ends with purity.

Tazria-Metzora: Monday: The Sorrow of the Tzaddik

We encounter the affliction of tzara’at specifically with great tzaddikim (righteous individuals). Moses’ hand is afflicted with tzara’at, Miriam the Prophetess became completely leprous and it is written about the Mashiach that he is a leper. The section on the afflictions in our Torah portion opens with the words, “A person (Adam), if there will be on the skin of his flesh”. The word Adam, alludes to the tzaddik, a “lofty person”. Why is the tzaddik afflicted with tzara’at?

The tzaddik has a ‘sense’ for the redemption. He recognizes the intense goodness of the future redemption and as a result senses the depth of the evil in exile. (As opposed to ordinary people like us, who do not feel too badly about the exile). The tzaddik has great sensitivity, and literally feels the flaws around him on his own skin. The root of tzara’at, צ-רע, is an acronym for tzaddik v’ra lo/a tzaddik who has evil. He is a tzaddik, but he feels badly and bitter because of the evil surrounding him.

צרע is also an anagram for צער/sorrow. This is the deep sorrow of the leprous tzaddik, which causes him to arouse G-d’s great compassion.

“All the days that the affliction is on him he will be impure, he is impure, alone he will sit, outside the camp of his dwelling place.”  “What is different about him than the other impure people, which requires him to sit alone? Because with his evil speech, he separated man from his wife and one person from the other, so he will be separated” (Rashi). Being alone in this case is a punishment, measure for measure. This afflicted person had a serious problem. Instead of gently touching, he touched with full force and caused destruction. For this reason, the affliction, (nega, from the same root as naga/to touch) surfaced, and he must remove himself from all social contact.

Being alone can also be positive, as in the case of “A nation that dwells alone”. The believing person seeks out opportunities to be alone with G-d. In truth, the aloneness of the leper also turns into positive aloneness. How?

First, the unrectified touch of the leper with other people created in him an emotional block toward himself. The impurity, tum’ah, is cognate to atimah/imperviousness and timtum/dullness. Constant evil speech and gossip-mongering deflects the soul from true, inner life to an external, noisy experience (similar to a person who is totally immersed in his cell-phone and forgets to live his actual life…). Now he must disconnect from any external contact, enter his self and reveal his loneliness in all its glaring starkness. After he has uncovered his true self, he will ultimately achieve purity of soul. At that point, the priest will go out of the camp to the leper and will see that the affliction has healed.

In Aramaic, tzara’at is called sgiru, (Unkelos) cognate to sgirah/closing. It points to the imperviousness of the heart and mind, the result of evil speech. The gossiper has entered a negative framework/misgeret, which is an emotional state resistant to change and rectification.

The beginning of healing is when the priest seals off/masgir (cognate to closing/sgirah) the leper. This sealing off is performed with conscious initiative, as is G-d’s way to “heal bitterness with bitterness”.

One may think that the rectification for a person who has transgressed and spoken forbidden speech would be to completely forgo speech, a “speaking fast”. At first, the leper does, indeed, have to limit his speech, with the guidance of the priest. He must speak only holy words with intentional consciousness and refrain from mundane chattering, while working on his inner senses. Ultimately, however, the leper brings as his purity offering a sparrow, which constantly chatters. This alludes to the fact that he may now speak freely. He has reached rectified natural consciousness, as is written, “”פטטיא דאורייתא טבין”/”Torah-based chatterings are good”.

Tazria-Metzora: Thursday: I am Guilty

If so, what is the meaning of the guilt offering of the leper? The leper must know that the tzara’at that afflicted him from G-d should really cling to him until his dying day (similar to the disease called leprosy today, which is incurable). A miracle has occurred, which has healed him of the affliction, and he must feel that he is in debt to G-d. He owes a great debt to G-d and he must pay it with a guilt offering.

Tazria-Metzora: Friday: A Treasure of Gold

“When you come to the land of Canaan that I am giving you for a possession and I will put the affliction of tzara’at in the house of the land of your possession”. Rashi explains: “This is good news for them, that the afflictions come upon them. For the Emorites had hidden treasures of gold in the walls of their homes, for all the forty years that Israel was in the desert, and through the affliction, the house was broken apart and they would find them”.

Before Passover, the homes of many Jewish families look as if someone had broken them apart. The thorough cleaning doesn’t leave a stone unturned…But in the merit of this cleaning, which is done for the sake of Heaven, with dedication and love – they ultimately find treasures in the house. The treasure is called מטמוניות של זהב / treasures of gold, alluding to the 49 days of the counting of the Omer. The word for treasure in Hebrew, מטמונים, is an acronym for מט ימים מונים וסופרים/49 days we count.

At the end of the Torah portion of Metzora we read of the various forms of impurity that issue forth from the body: Niddah and zavah, zav and ba’al keri. These impurities are connected to disease – either actual disease or a sort of ‘natural disease’ that has been with us ever since Eve was cursed, ‘you shall bear children with pain’.

Our Torah portion ends with two summarizing verses: This is the law of him that has an issue, and of him from whom the flow of seed goes out, so that he is unclean thereby; and of her that is sick with her impurity, and of them that have an issue, whether it be a man, or a woman; and of him that lies with her that is unclean. The final verse has מח/48 letters. The preceding verse has לה/35 letters. Together, they have מחלה/illness letters! The Talmud says that the numerical value of מחלה/illness, 83, alludes to the number of types of illness. But מחלה/Machlah is also the name of a righteous woman, Machlah the daughter of Tzlafchad. Moreover, if we write the word מחלה/machalah with its filling, מם חית למד הא , it equals ורפא ירפא/and he shall be healed. The remedy is hidden within the illness!

Illness is particularly connected to the sefirah of Hod/Splendor, as in the verse in the book of Daniel: “And no strength remained in me and my Hod turned against me to be destructive, and I retained no strength”. When Hod turns destructive, its letters,  הוד permute into דוה/feebleness, as in the verse in Lamentations about the exile, “all day long she is feeble”. How do we remedy the state of feebleness and turn it back into splendor? By activating the trait of Hod, which also means ‘thanksgiving’ – and giving thanks to G-d all day long. 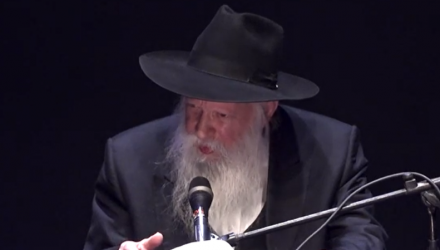 Are You Male or Female? The Power of Choice

Rabbi Ginsburgh on the most essential choices that we have made for our lives- including if we will be male or female. For English captions, click on

Roadmap to True and Lasting Pe...

More and more countries are