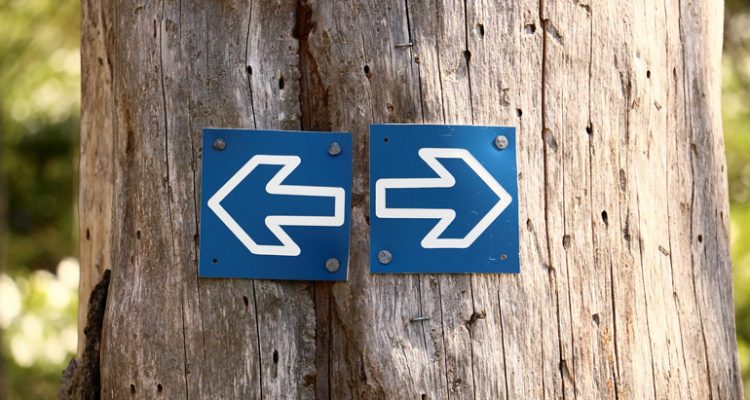 Moses is right. Korach is left.
The Torah is the golden mean that connects them

Korach and his followers’ uprising against Moses and Aaron has become a symbol of dispute for all generations, “Which is a dispute that is not for the sake of heaven? This is the dispute of Korach and all his congregation.” Their intimidating end comes when the earth opens its mouth and swallows them up. Is there any hope for them?

Korach in Contrast to the Spies

In the previous Torah portion of Shelach Lecha, the spies sinned because they preferred to stay in the wilderness, detached from reality. They chose living in a sheltered spiritual greenhouse rather than developing the agriculture of the Holy Land and creating a prosperous independent kingdom. The Zohar states that the spies were concerned about their personal status. In the wilderness they were highly respected leaders. They were afraid that when the Jewish People entered the land they would lose their prestige.

Korach’s sin was of a different breed. He was not necessarily opposed to establishing a state in the Holy Land. But, he was peeved by the fact Moses and Aaron, his first cousins, had been ordained by Divine choice, and not him. So, Korach contrived a new philosophy that captured many hearts. Based on the true claim the entire congregation is holy, he canvassed a campaign that would allow the people to choose their leader for themselves. He openly confronted Moses’ leadership, demanding elections. Long before the ancient Athenians arrived on the scene, Korach invented democracy!

Korach was confident that his wit, his status, his notorious prosperity and his excellent public relations would attain him a clear victory. He gained some fine successes and according to the most up-to-date public opinion polls, his democratic philosophy still rates sky-high… But, Korach’s political career ended abruptly when the earth swallowed him and all his followers alive.

In current political jargon, “left” and “right” are common concepts. Most of us would think that these terms were initiated at the time of the French Revolution. But, right and left are fundamental concepts in Kabbalistic wisdom. Scientifically, left and right are irreversible. In general, just as the human body is divided between left and right, the entire system of the sefirot is based on the left-right axis. The Zohar teaches us that Moses belongs to the right. Korach was a leftist.

Chochmah receives the initial flash of insight in the mind. It deals with abstract ideas and principles that are difficult to grasp in reality. In contrast, binah (the sefirah of understanding) develops ideas into detailed descriptions that can be envisioned in the mind’s eye and eventually put into practice. Whereas the right is concerned with lofty principles, the left deals more with activation from below.

Which Has the Greatest Power?

Moses brought the Torah down to earth from God above. The Torah is full of wise instructions how to behave: do this and don’t do that. The Torah is the essence of Divine wisdom, on the right.

But, Korach claims: With all due respect to Moses’ Torah, and his ability to teach abstract principles, when it comes to dealing with reality, I take the lead. I can build institutions, an army, a working educational system and a leadership and achieve better results in practice. And he is right (although he remains a leftist)!

What then is the problem with Korach’s approach? The Zohar finds three points of criticism for Korach’s view.

The first issue – Korach disregards the right completely. He attempts to sever the right from the left as if he has no need for them at all. He is so self-assured in his success, that he makes no plans for a true coalition with the right. Let them discuss essence and principles to their heart’s delight, when it comes to the crunch their talk is inconsequential. The left with its pragmatic approach will take control of politics and art, the media and education, and every other facet of the state that will be established in the Holy Land. The institution is mine. I can therefore silence the right altogether. I can label their speeches about “Divine law” and eternal principles as dark, primitive statements. The ruling ideology will be: What the public says is law and there is none beside it. As long as I am in power, reality is my god and God’s law means nothing to me.

The Second Flaw: Taking Over

The second issue – Korach wants to rule so completely that he wants to coerce the right to conform to his position. He approaches the right with a persuasive suggestion to collaborate with him. You have your say and I will have my say and together we can create a leadership, as long as you are my underdog… This is not a true coalition. Whether consciously or unconsciously, his true intention is to subjugate the unique essence of the right and make it conform to the left. Korach expects the right, which justly represents the laws of the Torah, to bend itself beneath the dominancy of the left. Under Korach’s rule, the truth will turn from being an essential principle to folklore that can be modeled as needed to the demands of the public. At most it is nothing more than a pretty embellishment.

Third Flaw: There is no Peace

In Kabbalah, in addition to the right and the left, there is a middle axis. This axis is the most significant of all. One of the most important qualities of the central axis is peace. Peace balances the tendencies towards right and left in a harmonious blend. “Peace” (שָׁלוֹם) means “wholeness” (שָׁלֵם). In general, the Torah is situated on the central axis of the sefirot. The Torah is not merely wisdom. It is a complete way of life.

The third issue with Korach’s democracy is the absence of peace. Korach’s attempt to take control of the Jewish People is the gravest example of “A dispute that is not for Heaven’s sake.” His dispute is not for the sake of anything, but a dispute for argument’s sake. More than Korach and his congregation want to take over the leadership and the priesthood, they want Moses and Aaron out.

Korach does not believe that there can be true unity between left and right. For him, true Jewish solidarity is a naïve dream. In his mind, dispute is a matter of fact and one’s best interest is to exploit it.

Because Korach’s dispute was for the sake of dispute and because it brought Moses’ God-given mission into question, there was no choice but to find a quick and easy solution, “And they descended alive into the abyss.”

Just as the right and left hemispheres of the brain function together, so too, in the long-term, we cannot do without the left. However, in its current state, after its descent into the abyss, the left must be rectified before we can allow it to reappear. In the brain, the right hemisphere controls the left side of the body and vice versa. Neither of them works alone. The right hemisphere includes an integral affinity towards the left, and the left includes a tendency towards the right. Discovering the right-ness that lies dormant in the left and the inert seed of left-ness in the right is the key to uniting them.

In Kabbalah, chochmah (the sefirah of wisdom) relates to the father principle and binah (the sefirah of understanding) relates to the mother principle. The right is relatively male and the left is relatively female. In Chassidic terms, like chochmah and binah, man is essence and woman is reality. The man deals with ideals and principles, sometimes he hovers over reality without quite touching it. The woman knows how to take control and turn ideas into reality, “the wisest of women constructs her home.” Yet, Kabbalah teaches us that every man is inter-included with a feminine aspect and every woman is inter-included with a masculine facet. Nonetheless, in the man the totality is male and in the woman, the totality is female. In order to create a happy marriage, each partner must find in him or herself an aspect of the opposite gender.

Similarly, in order to incorporate both left and right on the political scene, we need to find the leftist aspect of the right wing and the rightist aspect of the left wing. Then they will be able to come together in harmonious union.

In the words of the Zohar, we need to “include the left in the right.” Like the right hemisphere that controls the left hand, Moses’ right lends the tone, sets the values and deals with the essence. By his side we need Korach, who knows how to develop the abstract ideas into working models so that our national leadership will be right-handed. Abundance from above passes through certain Divinely selected figures. Korach’s statement that “The entire congregation are all holy” rings true because in its rectified state, the entire congregation represent reality.

The origin of unity between the right and the left lies in keter (the sefirah of crown), which lies above chochmah and binah. The collective soul-root of the entire Jewish People, rightists and leftists alike, lies in this sefirah. Keter is the source of the middle axis, where we find peace.

In a democracy, power is shared and allocated to different segments of society. Societies adopt democratic systems when they wish to allow conflicting values and goals to co-exist. In the body, such a system would wreak havoc. The brain could not function following democratic principles. “There is no peace in my bones because of my sins.”

By correctly integrating the right and the left hemispheres of the brain we empower the central nervous system (CNS) to respond correctly and in good timing to internal and external stimuli. Similarly, true solidarity between left and right political factions can be achieved by appointing a central control system in the form of a Divinely ordained monarchy that is accepted by the entire nation.

Both the souls of rightists, who follow Moses, and leftists, who associate themselves with Korach, sing the “Song of Shabbat,” which concludes, “A righteous individual shall flourish like a date palm.” The final letters of this verse spell out Korach (קֹרַח). Indeed, the Arizal teaches that Korach’s soul will eventually be rectified, when he uses his pragmatic leadership talents to help create a true Jewish state run according to Torah law.

Korach’s descent into the abyss was not his final word. Alive from his underground grave, he cries out, “Moses is true and his Torah is true!”

Q: If the Ba’al Shem