Pinchas: Sunday: The Binding of Pinchas

Pinchas is the same numerical value as Yitzchak (Isaac). Pinchas’ self-sacrifice is similar to Yitzhak’s self-sacrifice at the Binding of Isaac” Fittingly, Kabbalah explains that until the Binding, Isaac had a feminine soul. It was only after the Binding and in its merit that the masculine side was added to his soul and he was able to give birth, to be a father, himself. (It was also then that Rebecca, his wife-to-be, was born). The same is true of Pinchas. With his act of zealousness and self-sacrifice, another part was added to his soul. The holy Ari says that when Pinchas acted, the souls of Nadav and Avihu, the sons of Aaron the Kohen, (who literally sacrificed their souls) entered him. Now, Pinchas can also be a priest, the father of his sons, after him, who will be priests for eternity.

“Pinchas is Eliyahu”, Elijah the Prophet, the heralder of the redemption. Our Sages say Elijah fulfills his mission with four ‘flights’. The hint: Eliyahu X 4 = Pinchas. Pinchas’ name is written four times in the Torah. 4 times Pinchas = Eretz Yisrael/the Land of Israel. Pinchas merited to enter the Land of Israel.

Pinchas: Monday: The Tribes of Y-ah

“Reuven, the eldest of Israel, the sons of Reuven, Chanoch, החֲנֹכִי    the Chanochi family, to Falu, the family of Falui…these are the families of Reuven.” The letters yud-hei were added to all the names of the families of the tribes. As above, the Chanochi family, which is the name Chanoch with a hei added at the beginning and a yud added at the end. Rashi explains that this is a testimony to the kosher family status of the Children of Israel, even when they were enslaved in Egypt: “The tribes of Y-ah (yud hei), testimony to Israel”. The holy Name yud-hei seals their names as a testimony.

On the surface, the marital relations from which Reuven was born were blemished, for Jacob’s thoughts that night were on Rachel. Thus, it must be acknowledged that nonetheless, the Divine Presence rests upon those relations. On an inner level, this was possible as Jacob gave himself over to G-d and directed his actions according to however G-d would have events play out, including those events that were beyond the realm of his knowledge.

Shimon received a yud-hei “for G-d heard that I am hated”. This would seem to create a blemish in the marital relations between Jacob and Leah, from which Shimon was born. (“The children of the hated”). For this reason, the yud-hei seal of kosher family status must be added to Shimon’s name, to acknowledge the fact that hatred was not really involved, G-d forbid.

Zvulun is the last of Leah’s sons. Even when her sixth son was born, Jacob still preferred Rachel. Nevertheless, the sons of Leah are quintessentially kosher and part of Jacob’s family.

Now for some beautiful allusions to the love between Jacob and Leah expressed in these three names: Reuven Shimon Zevulun = “ואהבת לרעך כמוך“/”Love your companion as yourself” !In addition, the average value of the first letters of the three names Reuven Shimon Zevulun equals ahavah/love squared. Reuven is Jacob’s first son (alef), Shimon is the second  (beit) and Zevulun is the tenth (yud). Alef-beit-yud equals ahavah/love.

The Torah portion of Pinchas highlights the place of women. The first woman in the portion is Kozbi bat Tzur, who was killed by Pinchas. Afterwards, the portion tells of the five daughters of Tzlafchad: Machlah, Noa, Hoglah, Milkah and Tirtzah. Afterwards, “And the name of the daughter of Asher was Serach”. And at the end, two women in one verse: “And the name of the wife of Amram was Yocheved the daughter of Levi, who was born to Levi in Egypt, and she bore to Amram Aharon, Moses and Miriam, their sister.” In all, nine women!

There is a distinct connection between the first woman mentioned in this portion and the last. About Kozbi it is written: “Kozbi the daughter of the prince of Midyan, their sister” (the sister of the Midyanites). About Miriam it is written, “Miriam their sister” – as opposed to the rest of the women who are mentioned only with the names of their fathers.

The holy Ari says that Kozbi is associated with the image of the seductive woman, לילית /Lilith (who is connected to “the first Eve”). Lilith is the same numerical value as תֹף /tof/drum. The negative פיתוי/temptation is an acronym and connected to תופים / drums. A certain type and rhythm of beating drums creates a certain atmosphere of temptation, the negative drum. As opposed to that, there is the holy drum: “And Miriam the prophetess, the sister of Aaron, took the drum in her hand and  all the women went out after her with drums and dance.” Miriam rectifies the blemish of Kozbi. Inside Kozbi, there is a very large spark that must be rectified. In this way, all the women in this Torah portion join together to create a holy band. Zimri the son of Salu also joins the celebration. His name, Zimri, means “my song,” while Salu can also mean “to cantillate”.

Pinchas: Wednesday: The Voice of the Woman

Words of truth that flow from the intelligence of the heart of righteous women can greatly impact any holy issue, particularly the wholeness of the Land of Israel. This power has been particularly revealed over the last generations. Kabbalah and Chassidut explain that in this world, only the voice of the man is heard. But in the future (which is coming closer in our day) the verse “there will be heard in the cities of Judah…the voice of the bridegroom and the voice of the bride” will be fulfilled. “In the merit of righteous women, Israel was redeemed and in their merit, they will be redeemed in the future”.

In Wednesday’s Torah portion, we read that G-d commanded Moses to appoint Yehoshua ben Nun as the leader to continue after him. Why was Yehoshua chosen and not Pinchas, who is mentioned and praised at the beginning of our Torah portion?

Yehoshuah excels at diligence and perseverance, “He will not move from within the tent”. Day in and day out, he serves Moses, like a Daily Offering. Pinchas, on the other hand, excelled at an extraordinary act of zealousness and self-sacrifice, holy enthusiasm that exceeds normal boundaries, similar to the Musaf, Additional Offering.

The Daily Offering is the foundation. Thus, when the identity of the new leader is determined, Yehoshuah is chosen. But at his side, the ‘spice’ of Pinchas, who breaks through barriers, is needed.

If so, why is the Pesach offering mentioned here at all?

Pesach is the foundation and beginning of the nation of Israel, similar to circumcision during the first days of a Jew’s life. (This is highlighted by the special connection in Jewish law between circumcision and the Pesach offering). Everything that comes later is built on this foundation and so, before the holidays and the Musaf offerings, the Pesach offering is mentioned.

The Pesach offering that opens the holidays is like the Tamid (Daily) offering that opens the portion of the Musaf offerings. If the Pesach offering corresponds to circumcision, then the Tamid offering is like the birth. This is alluded to in the fact that the average value of the words Tamid Pesach equal Eish/fire, as in the beginning of this portion, “My offering, my bread for my fire”. The numerical difference between Tamid and Pesach equals אשה  / a fire offering, “A fire offering a savory fragrance for G-d”.

פסח להוי‘/ Pesach for G-d equals tzaddik. The concept of the tzaddik is associated with the rectification of the covenant, the trait of Yesod/Foundation, as in the verse, “the tzaddik is the foundation of the world.” The sefirah of Yesod is the sixth in the attributes of the heart, and the sixth portion of the weekly Torah reading is particularly associated with Yesod. The expression  פסח להוי‘ / Pesach for G-d appears seven times in the Torah: Five times before the Book of Deuteronomy and twice in the Book of Deuteronomy. (This is a זהב /golden division, in which the ז/7 divides into ה /5 and ב /2). The last two times of the seven, the Torah says, פסח להוי’ אלהיך /“Pesach for Havayah, your G-d” – 5 times  פסח להוי‘ / Pesach for G-d and another two times פסח להוי’ אלהיך  = 10 times Yosef Hatzaddik, the main persona of the sefirah of Yesod.

“On the eighth day you shall have an assembly, you shall not do any work”. Shmini Atzeret, called today in the Land of Israel ‘Simchat Torah’ – is the climax and summit of all the holidays.

The secret of the number eight is alluded to in the word   אז /az’  as in ‘Az yashir’ – an alef on a zayin the one on the seven. The number seven is wholeness connected to this world, as in the seven days of the week. The eight is above nature. On Sukkot we bring a total of seventy (10 times 7) bulls, in order to atone for the Seventy Nations. On Shemini Atzeret, however, we only offer up one bull, representing the Nation of Israel. On this day, Israel and G-d are together – with no other nations present.

More eights: The Torah portion of Pinchas is the eighth in the Book of Numbers. Pinchas = 8 times G-d’s Name, Havayah. Before Sukkot, there is another 8 in the portion of the Musafim: Seven special days – Shabbat, Rosh Chodesh, the first and seventh days of Pesach, Shavuot, Rosh Hashanah and Yom Kippur. Before them, there is a weekday (or day of chol hamoed)  when we bring a Tamid offering. (From here we learn that a regular weekday has something about it that is even higher than the holidays!).

Another phenomenon is the Sukkot Musaf verses: ּובַיּוֹם הַשְּׁבִיעִי פָּרִים שִׁבְעָה אֵילִם שְׁנָיִם כְּבָשִׂים בְּנֵי שָׁנָה אַרְבָּעָה עָשָׂר תְּמִימִם. וּמִנְחָתָם וְנִסְכֵּהֶם לַפָּרִים לָאֵילִם וְלַכְּבָשִׂים בְּמִסְפָּרָם כְּמִשְׁפָּטָם “And on the seventh day, seven bulls, two rams, 14 unblemished sheep a year old, and their meal-offering and their drink-offerings for the bulls, for the rams, and for the lambs, according to their number, after the ordinance.” Eight consecutive words that end with a final mem: Once in the first verse and seven times in the second verse – 1:7,    אז /az. 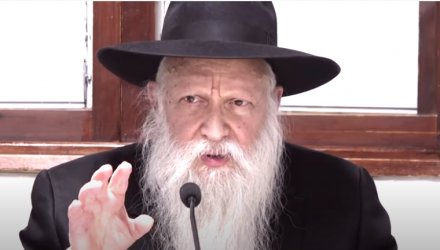 In this exquisitely insightful excerpt, Rabbi Ginsburgh guides us beyond our false humility to learn how to truly help a person who seeks our guidance.

Living with the Torah’s Week...

Emor: Sunday: What to remember