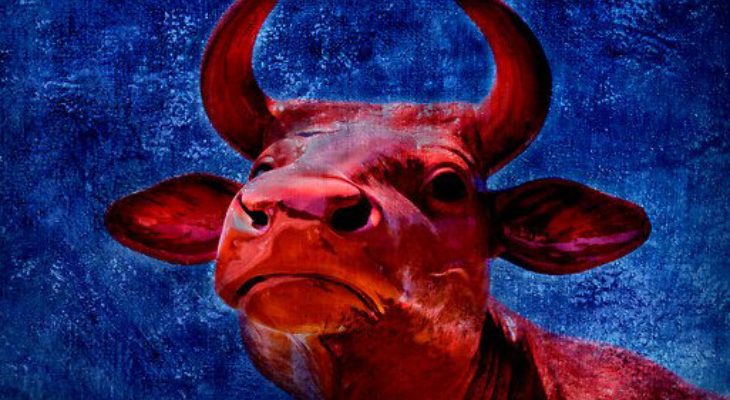 Parshat Chukat: Why Is There Death in the World?

and selecting "save link as…").

The Torah portion of Chukat begins with the commandment of the red heifer. When a cow that meets the intricate halachic ("Jewish law") criteria for a red heifer is burned as per the Torah's instructions, and its ashes are mixed with fresh stream water, the resulting mixture purifies a person who has come in contact with death. According to Jewish law, death is considered the "Father of Fathers" of impurity, and a person who has come into contact with death becomes impure. Spiritually, this contact with death means that the person has become affected by the law of entropy. At some level, he has integrated into his own soul that there is no eternity in reality, leading to inner, spiritual despair.

One of the most basic foundations of the Torah is that we must serve God with absolute joy. This can only be accomplished if one is released from the fear of death and all that it implies. What is the Divine power of the ashes of the red heifer that heals us from the despair of death?

In order for the ashes of the red heifer to be fit to purify the impurity caused by death, the Torah tells us that they must be from a cow that is consummately red. The birth of a consummately red heifer is a very rare occurrence. God, in His Divine Providence, sees to it that a red heifer will be born in the generation that needs it. The first red heifer for ritual use was prepared by Moses in the desert. Eight more red heifers were prepared throughout the Temple period. The tenth red heifer will be prepared by the Mashiach. (One of the signs of the imminent arrival of Mashiach is the birth of a red heifer.) Its ashes will prepare us for true eternal life and the resurrection of the dead.

The Red Heifer and Archetypical Souls

In Kabbalah and Chassidut, the red heifer is identified with three archetypical souls.

In Hebrew the heifer is called a parah adumah temimah, a consummately red cow. When we meditate on the connection between each of these descriptions of the red heifer and each of the archetypical souls to which it is connected, we will understand its secret.

The Consummately Red Cow of Moses

At the beginning of this Torah portion, God commands Moses "…and the Jewish People shall take unto you a consummately red heifer." Our Sages explain that all the red heifers ever prepared are essentially related to Moses.

The red heifer is a paradox. It purifies the impure and renders the pure impure. King Solomon, who was the wisest of all men, grasped the deep spiritual reason for all the commandments — except for the paradox of the red heifer. In Ecclesiastes he writes of the red heifer, "I thought I was wise, but I see that wisdom is far from me."

Moses was the only person to understand the paradox of the red heifer. God, in an act of grace, revealed this secret exclusively to him, making this commandment more related to Moses than to any other figure. As such, the red heifer is called the cow of Moses.

(The Hebrew word for "cow," parah, also means to be fruitful and multiply. More than any other animal, the cow is essentially related to procreation.)

The Consummately Red Cow and Eve

The red heifer is the potent life essence that comes to purify spiritual and physical contact with death. It is thus associated with Eve, who was held responsible for having brought death to the world.

Eve's name was originally intended to be Chayah, spelled chet (the letter chet represents the pulsation of life), yud, hei. Chayah means "the living soul" and represents eternal life. After she sinned, Adam called Eve Chavah, spelled chet, vav, hei, which means "the mother of mortal life." (The vav in Eve's name alludes to the snake, called chivya in Aramaic.)

The color red is the color of blood and of life itself. The consummately red cow represents consummate, eternal life and procreation. The feminine form of the Hebrew word for "red" used in relation to the feminine heifer is adumah. This word spells Adam, with a hei at the end, connoting femininity. The feminine soul mate of Adam is Eve. When we meditate on the redness of the cow, we meditate on the soul of Eve before the primordial sin, when she was still Chayah. In the future, when the world will be purified of the touch of death, Eve's name will be Chayah once again.

The Consummately Red Cow and Sarah

The most severe sin in the history of the Jewish People was the sin of the Golden Calf. Our sages explain that the red heifer is the only commandment that atones for this sin. The image of the red heifer is that of the mother cow coming to clean up the mess left by the sin and impurity of her golden calf. In this respect, the red heifer is associated with motherhood, which is represented by the Matriarchs. In particular, the red heifer relates to the first, greatest of the Matriarchs, Sarah. Rashi explains that at the inauguration of the Tabernacle, the princes of each tribe brought sacrifices of cows, rams and sheep. The cows correspond to Abraham, the rams to Isaac and the sheep to Jacob. Thus, Sarah, Abraham's wife and soul mate, also corresponds to the cow and represents the rectification of the sin of the golden calf.

The primordial sin of Adam and Eve is like the collective sin of the Jewish People with the Golden Calf. As such, when she rectifies the sin of the golden calf, Sarah rectifies the original mother figure of all humanity, Eve. The Hebrew word for "consummate" is temimah. The Patriarchs walked with consummate sincerity, temimut, with God. The numerical value of temimah is 495, while the numerical value of Sarah is 505. These two numbers equal 1000, which is the most perfect and consummate of numbers.

A beautiful story illustrates Sarah's inner connection to the red heifer. One of the great tzaddikim who lived approximately 250 years ago was Rabbi Nachum of Chernobyl, the author of the book "Maor Einayim." Rabbi Nachum was the disciple of the Ba'al Shem Tov and of his successor, the Magid of Mezeritch. The Lubavitcher Rebbe quotes Rabbi Nachum, who wrote in his book that every Jew has a spark of Mashiach — a spark of eternal life.

Rabbi Nachum dedicated much of his life's work to redeeming imprisoned Jews. In those days, if a Jew could not pay his debts to the local landlord, he was often thrown mercilessly into a dungeon or pit, sometimes with his entire family. Rabbi Nachum raised money to redeem these unfortunate Jews, saving them from sure death. Our sages say that there are two commandments that are called "great mitzvot." The first is the commandment to procreate, and the second is the commandment to redeem imprisoned Jews. When one redeems a Jew, thereby saving his life, it is as if he given birth to his soul.

It came to pass that Rabbi Nachum was also imprisoned. Daily he would bribe the prison warden to let him out of the pit for a short time to pray and to immerse in the mikveh. One day, Rabbi Nachum did not bribe the warden. He explained that he did not need to do so, for he would be released from prison on that very day. When asked how he knew that he would be released, he related that on that night Sarah had come to him in a dream. Rabbi Nachum asked Sarah what he did to deserve being thrown into a pit. Sarah answered that because Rabbi Nachum had devoted his life to redeeming captives, it was necessary for him to experience a taste of captivity so that he could consummately understand the situation and subsequently devote himself to this mitzvah ("commandment") in an even more rectified manner. When a person understands why God has involved him in a certain situation, this releases him from the situation. Thus, as soon as Rabbi Nachum understood the reason for his imprisonment, he knew that he would be released on that very day.

It was Sarah, specifically, who appeared to Rabbi Nachum in his dream. She is essentially related to the important lesson that she wished to impart to Rabbi Nachum: In order to do something consummately, one must taste it. This is the secret of why there is death in the world and why the mother figure of the red heifer comes to purify its touch.

The purpose of the Jewish People is to rectify the primordial sin, thus redeeming all humanity from death. Sarah teaches us that in order to rectify death, we must first taste it. Sarah herself is the first Jewish person to taste death. As she rectifies Eve, Sarah's purpose in life is to purify and rectify death and transform it to eternal life. Had the Jewish People not sinned with the golden calf, they would have merited eternal life. Sarah, who symbolizes consummate life, the red of the heifer, rectifies that sin with the consummate 1000 of her name with temimah. Just as Moses received the consummate 1000 lights of the Torah at Mount Sinai, so Sarah, through the secret of rectifying the touch of death, endows her children with eternal life.