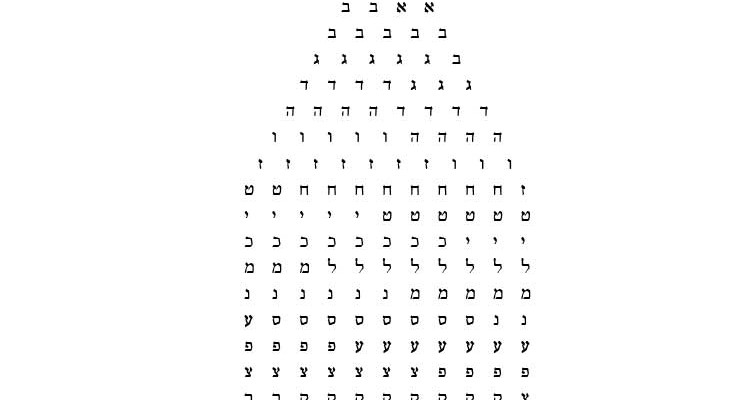 This week’s parshah, Naso, is the lengthiest parshah in the Torah. It has 176 verses altogether.

The number 176 is particularly related to length (or complete development, as we will see). The longest chapter in the entire Bible, the 119th chapter of Psalms, also has exactly 176 verses! Also, the longest tractate of the Talmud, tractate Bava Batra has 176 pages! These three examples of 176 in relation to length correspond with the three usages of our parshah’s name, Naso, in the parshah itself, as explained elsewhere.1

n is read “triangle of n” and indicates the sum of integers from 1 to n). 528 is the numerical value of two verses which themselves indicate length and greatness: “How great are Your actions”2 (מַה גָדְלוּ מַעֲשֶׂיךָ ) and “So that you have many days”3(לְמַעַן יִרְבּוּ יְמֵיכֶם ).

26, where 26 is of course the gematria of God’s essential Name, Havayah (י־הוה ).

There is a well known explanation that the words that begin parshat Naso, “Raise the head [of the children of Gershon too]”4 (נָשׂא אֶת ראשׁ ) also hint at raising each letter of the word “head” (ראשׁ ) by replacing it with the next letter in the alphabet. The letters that comprise the word “head” are reish (ר ), alef (א ), and shin (ש ). Raising them in this manner we get,

For every parshah, the masters of the Masoretic tradition provided us with a particular word (or words) whose numerical value equals the number of verses in the parshah. Each such word is referred to as a siman (literally, a sign) of the parshah. For parshat Naso, the Masorah gives two such signs that are proper Hebrew names, Amos (עָמוֹס ) and Aminadav (עַמִינָדָב ).

Since the full value of each siman is 176, or 8 ∙ 22, dividing it into 5 ∙ 22 and 3 ∙ 22 represents a golden section, because essentially 8 has been divided into 5 and 3. Incidentally, the reason that chapter 119 in Psalms has 176 verses is because for each of the 22 letters of the Hebrew alphabet includes 8 verses that begin with that letter. In fact, for this reason it is known as the 8-faced chapter.

Chashmal Numbers: The Secret of Language

Parshat Naso ties into the letters of the Hebrew alphabet in another way. Naso is the 35th parshah of the Pentateuch.

Actually, there are 35 letters in the Hebrew alphabet. How so? To the 22 simple letters we add the 7 double-letters that can take on two forms (hard and soft) ב ג ד כ פ ר ת and the 5 final letters ך ם ן פ ץ and the letter ש (shin) has two forms, a right (שׁ ) and a left (שׂ ) form—altogether 35 letters!

But, 35 and 22 are part of the same series of figurate numbers called chashmal (electrum) numbers. The figure of the nth chashmal number is a triangle (of size n – 1) sitting on top of a square (of size n). Mathematically, we write this as,

Let us calculate the first five chashmal numbers and then illustrate them visually,

It is easy to see that the series of chashmal numbers contains the secret of the Hebrew alphabet, because:

Indeed, the word chashmal (חַשְׁמַל ) appears in only one context in the entire Bible, in the Workings of the Chariot in the book of Ezekiel.5 It is considered the most mysterious word in the entire Bible. The sages explain that it is a composite word made up of the two words chash and mal. They explain that there is type of angel called a chashmal, which fluctuates between silence (chash) and speech (mal). This explanation reveals the intrinsic connection between the word chashmal and the secret of the Hebrew language.

For completeness, let us draw the various groups of Hebrew letters in their corresponding chashmal forms:

Analyzing the Electrum of Letters

The numerical value of these two middle letters גע is 73, which is the value of “wisdom” (חָכְמָה ). But, in a beautiful example of even deeper self-reference, 73 is the 22nd prime number! That the center of the complete Hebrew alphabet is wisdom alludes to the verse: “You made everything with wisdom,”6 indicating that God created His world with wisdom.

Now, the numerical sum of the rest of the letters on the central axis of the chashmal figure of 35 א י ם ץ ש is 441, the gematria of “truth” (אֶמֶת ).

In every chashmal figure there are exactly five vertices (except for the trivial firstchashmal figure of 0, which has only one point). The five vertices of the chashmal figure above are: א ח כ ר ת . There combined value is 629, which is also the numerical value of the verse, “A fountainhead stream that is a source of wisdom”7 (נַחַל נֹבֵעַ מְקוֹר חָכְמָה ), linking it directly with the middle letters, which we saw equal the value of “wisdom” (חָכְמָה). If we add the 5 vertices (א ח כ ר ת ) to the 2 middle letters (ג ע ) we will get 702, or “Shabbat” (שָׁבָּת ), which as noted above is twice the value of our parshah’s name, Naso (נָשֹׂא ).

But, now let us note that 176 is also a chashmal number!

The Elements of Geometry

What is the essential (and spiritual) significance of the number 176 and how does it tie in with what we have seen so far regarding its use in relation to length and greatness? To begin let us quote from the commentary of the Gaon of Vilna (the Gra) on Sefer Yetzirah (The Book of Formation). He writes:

So, as the Gra explains, a cube has 8 points, or vertices (which correspond to the 8 verses that start with each of the letters of the alphabet in Psalms 119), 12 lines, which are also called diagonals (גְבוּלֵי אַלַכְסוֹן ), and 6 planes. Altogether, the cube is constructed from 26 simple geometric elements, which is of course the value of Havayah.

Analyzing the cube in terms of these geometric elements parallels the developmental geometric model known as “point, line, and plane” (נְקוּדָה קַו שֶׁטַח ). In Kabbalah, the Arizal uses this model to describe the maturation of every spiritual entity from a point, to asefirah, to a complete partzuf.8 In addition, the Gra adds the material matter of the cube itself, which is constructed out of these elements.

Though the Arizal explains that every process of maturation is complete once it reaches a “planar” stage (in the model point-line-plane), the next geometric stage is the 3-dimensional solid, which is Hebrew is called, גֶשֶׁם (geshem). The value of this word for solid (גֶשֶׁם ) is itself a cube, 343 = 73! Contemplating the value of the words for point, line, plane, and solid (נְקוּדָה קַו שֶׁטַח גֶשֶׁם ), we find that their sum is = 931, which is also the exact value of the three dimensions of reality described in the Book of Formation, space-time-soul (עוֹלָם שָׁנָה נֶפֶשׁ ).

Now, let us see how this ties back to 176. If we now take the number of each of the basic geometric elements found in the cube and multiply it by the letter that represents that element, we have:

Thus, 176 lies at the heart of the most basic developmental process (from a point, to a line, to a plane), as found both in geometry and in Kabbalah and this process is clearly represented in the letters of God’s essential Name, Havayah. We explain many times that the entire Torah can be found in the secret of the Name Havayah. The goal of the Torah is that all things constantly develop, physically, spiritually, and most importantly, consciously by attaining a higher and higher awareness of God’s Name, Havayah. The final result is stated in the well known prophecy, “For the earth will be filled with the consciousness of God, just as the waters cover the ocean.”9 Thus, it is only appropriate that the apex of all numbers found in the Torah, 176, represent the process of development from a simple point to an area that represents the essence of the infinity of the Divine itself.

This consciousness is not limited only for those who are close to God and the Torah. When Rachel gave birth to Joseph she said, “May God grant me another child”10 (יֹסֵף י־הוה לִי בֵּן אַחֵר ). This verse is explained in Chassidut to mean that even the other should become a son of God, through understanding11 and coming to an awareness of God’s essential Name, Havayah. Indeed, in this verse the words “May God grant me” (יֹסֵף י־הוה ) equal 176!

We noted above that 176 is a chashmal number—a triangle over a square. Now we have seen that spiritually it represents the development of the consciousness of Havayah. As we discuss often, other than 26 (the value of Havayah), the most important number connected with God’s essential Name is 1820, which is the number of times Havayahappears in the Pentateuch.

1. See our article for parshat Naso, “The Flow of Paradox.”

8. See also “Converting the Wisdom of the Nations, Part 2.”

11. The Hebrew words for “son” (בֵּן ) and for “understanding” (בִּינָה ) stem from the same root.