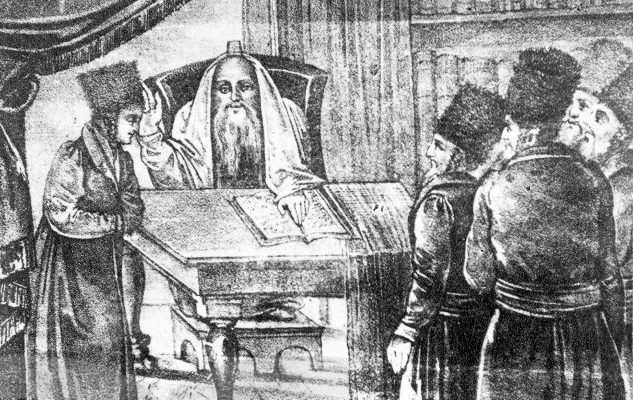 Pirkei Avot 1:6 A Rebbe and a Friend

Yehoshua ben Perachiah would say: “Appoint yourself a rabbi, acquire for yourself a friend, and judge every man to the side of merit.”

Rabbi Nosson Dovid of Shidlowtza, the grandson of Rabbi Yaakov Yitzchak Rabinowitz, also known as “the Holy Jew,” proposed a tongue-in-cheek explanation for this mishnah:

When a Chassidic rebbe passes on to the next world, it is difficult for his chassidim to immediately accept a replacement. In their eyes, the new rebbe cannot fill the shoes of their recently deceased great and righteous leader. It is to such a case that the words in our mishnah, “Appoint yourself a rabbi,” refer. Even though, in your opinion, the new rebbe is not worthy of his lofty position, nonetheless, appoint him as your rebbe against your will. And if you reject this possibility, claiming that it is pointless to appoint a rebbe against your will when your heart is not open to him, our mishnah has an answer: “Acquire for yourself a friend.” Appoint yourself a rebbe who is worthy of being your friend—someone with whom you can connect. Then, even if you cannot accept him as your rebbe, you will have at least acquired a friend who can help you better yourself. But what if you consider the new rebbe to be your good friend but unworthy of being a rebbe, yet the rebbe himself thinks that he is your rebbe and not just your friend? And if you know that he is unworthy of the position of rebbe, then he is not a man of truth. How can you connect to him? Our mishnah also has an answer for this quandary: “Judge every man favorably.” View your rebbe as a person who also simply wants to connect to you as your friend and not as your rebbe. Even though you call him “Rebbe,” believe that in his heart, he does not see himself as your rebbe, but rather, as your friend.[1]

As much as Rabbi Nosson Dovid’s explanation is surprising, it does relate to a real state of affairs. After a rebbe passes away, his chassidim feel that it is impossible to find a new rebbe. Chassidim are connected to their rebbe with all their hearts and souls, and it is extremely difficult for them to replace him. Thus, the mishnah says, “Appoint yourself a rebbe,” even against your will, specifically when you are on the brink of despair and feel that your entire world has collapsed. Appoint yourself a rebbe without making comparisons. Ultimately, the new rebbe will find his way to your heart and soul. Appoint yourself a new rebbe immediately, on the very same day, following the custom that at the funeral of the old rebbe, the chassidim appoint a new rebbe and proclaim their devotion to him. If they wait, doubt will creep in and disrupt the process and the potential for connecting with the new rebbe.

How does appointing a rebbe against your will make sense? The mishnah continues “Acquire for yourself a friend.” Search for someone who is at least worthy of being your friend. Someone to whom you can feel close. (Our mishnah begins with the word ‘appoint’—implying even against your will—and continues with ‘acquire’—a verb that implies intent, according to Jewish law).

An example of how this process was applied can be found after the passing of Rebbe Simchah Bunim of Parshischa. Rabbi Yitzchak Meir, the Chiddushei Hareem of Gur (1799-1866) took his friend, the Kotzker Rebbe, as his new rebbe. In a certain way, this is how the Alter Rebbe related to Rebbe Menachem Mendel of Vitebsk, who he regarded as his rebbe after the passing of the Maggid of Mezritch. (And perhaps this is the reason that Rabbi Menachem Mendel of Vitebsk is not counted among the rebbes of Chabad). “And judge every man to the side of merit.” Assume that the new rebbe feels the same way. Everyone calls him “Rebbe,” but he has true lowliness and wishes to bond with his chassidim (including those chassidim who did not know the previous rebbe and for whom he is their first rebbe).

As it turns out, what was considered a witty, “tongue-in-cheek” explanation of the relationship between a rebbe and a chassid 200 years ago, has in our generation become the most pertinent explanation. But the truth is that we have actually gone back even further in time. We have returned to a state of affairs that existed in the first years of the Ba’al Shem Tov’s era, when the rebbe—the Ba’al Shem Tov—and his group of followers were all called ‘friends’ and not rebbe and chassidim. Each member of the community felt that all the others were there to help him rectify himself out of a sense of camaraderie and solidarity.