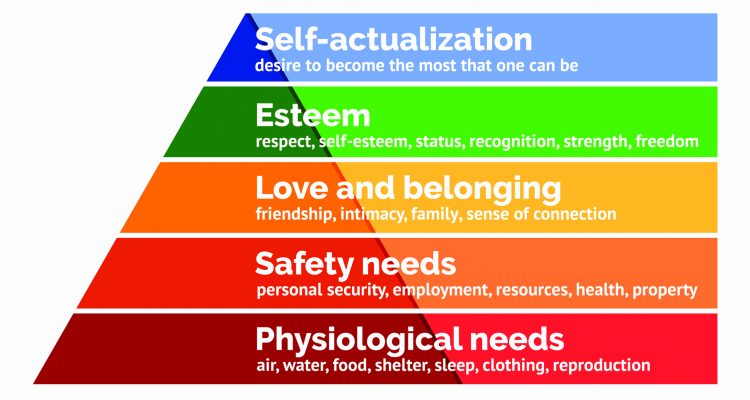 Four Crowns and the Hierarchy of Needs

Three of the vessels Moses is commanded to construct for the Tabernacle have a special feature in common. The ark, the table, and the golden-altar all were to be crafted with a unique golden laurel, or crown surrounding their upper edge.

The three-word phrase that repeats and describes these three golden laurels is “a crown of gold round about” (זֵר זָהָב סָבִיב).

Rabbi Shimon bar Yochai, the master of the Torah’s esoteric tradition, notes that there are three different crowns: “the crown of Torah, the crown of priesthood, and the crown of kingship”[4]

These three crowns correspond to the three laurel crowns crafted into the ark, the golden altar, and on the table of showbread, in order. In the ark lay the Tablets of the Covenant and the Torah scroll written by Moses. The golden altar is a clear symbol of the priesthood. The table of showbread is a symbol for the king’s table, from where the sustenance for the entire kingdom originates, as the king’s duty is to provide for his people.

However, Rabbi Shimon bar Yochai adds a fourth crown and says, “And the crown of a good name rises above the others.” We have not found a fourth laural-crown described as part of the Tabernacle or its vessels. The completion of this particular meditation on the laurel-crowns of the Tabernacle is provided by the Torah’s quantitative analysis. These types of findings can be identified as Rabbi Ginsburgh’s specialty.

As it turns out the very first paragraph (called a parshiyah) in parashat Terumah. This first paragraph (Exodus 25 verses 1 to 9) describes the request God made of the people to donate from their heart for the Temple and lists the various materials that were to be given. The 9 verses in this paragraph consist of 74 words and 295 letters altogether. 295 is the value of the three-word phrase that repeats in respect to each of the golden laurels, “a crown of gold round about” (זֵר זָהָב סָבִיב). In fact, to strengthen this beautifully relevant finding is augmented by the fact that the total words in the paragraph, 74, is the value of the word “round about” (סָבִיב). This last relationship warrants some further explanation.

The crown is not just a laurel placed on the head of a king. The crown is the name of the highest sefirah among the Ten Sefirot—the channels of Divine effluence through which God creates and maintains creation. Like the crown that is placed above the head, the sefirah of crown, and the crowns adorning the vessels in the Temple, represent that which is beyond—beyond the inellect in the case of the sefirah of crown, beyond the individual in the case of the king’s crown and the Divine infinite light that hovers above the Torah in the case of this parapraph. In Kabbalah, the light of that which is beyond, the light of the crown is also called “the light that surrounds all worlds” (סוֹבֵב כֹּל עָלְמִין), where worlds here refers to all manners of reality. You will notice that “round about” and “surround” in Hebrew are very similar, they are in fact almost the same word. The crown of the good name is thus the infinite light that is beyond our conscious and limited experience. It is the realization that God is both here below in everything but also so much more than everything that the Ba’al Shem Tov wanted to make us all aware of. This is one of the reasons why he was called the Ba’al Shem Tov, i.e., the master of the good anem, an allusion to the crown of the good name, the infinite light of God that surrounds all of reality including our soul and thereby hovers above it and even above the Tabernacle itself.

The three crowns and Maslow’s heirarchy of needs

The word “crown” or “laurel” (זֵר) in Hebrew—whose value is equal to “light” (אוֹר)—is related to the word for “belt” (אֵזוֹר) or “girdle.” In modern Hebrew this word has come to mean “area.” And so the three vessels, the ark, the golden altar, and the table of showbread can be seen as representing three areas of life.

Beginning from the lowest area, the table of showbread corresponds to the physical area or side of life, since bread is the universal symbol for sustenance and for livelihood. As we mentioned the crown encircling the table of showbread represents kingship or the sovereignty of the individual and his responsibility for himself. As we will see this is the security that one needs for one’s physical needs.

Upon the golden altar, incense was burnt and its fragrance spread through the entire Tabernacle. In the Temple in Jerusalem, the sages describe that the fragrance was so strong that it spread as far as Jericho (this might be either a physical description or a symbolic one, or perhaps even both). The fragrance represents relationships that are the fuel of the human spirit. The spirit is developed through relationships, particularly family relationships. As we said, the table’s crown represents the priesthood. In the psyche, the priesthood represents the psychological powers that drive our ability to build healthy relationships. These can be our self-esteem, our ability to respect others, our inner strength and inner freedom.

Finally, the ark represents our ability to seek all that is beyond our physical and psychological needs. One might say that the ark represents the needs of the soul, the need to feel that life has purpose and meaning and that we are here for a purpose. The ark does not have a functional role per se. It is more like an inspiration to everything that goes on in the Tabernacle and outside it. The laurel around it captures the “crown of Torah,” which in our lives can be understood as the need for recreation. The Torah is not just a source of laws and it not only charts how we should live our lives. At its highest level, the Torah is a delight, it is the instrument by which we can take pleasure in our connection with God. As King David said, “If Your Torah [God] were not my delight, I would have perished in my affliction.”

Having analyzed the three vessels and their laurels as they correspond to the different areas of life, we are reminded of Abraham Maslow’s hierarchy of needs. Let’s look at it a moment: 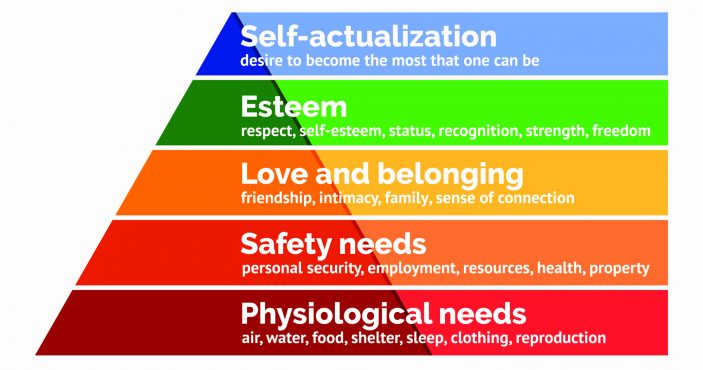 Now if you recall, we found three vessels with three laurels or crowns and a general crown surrounding the entire Tabernacle. The three vessels, correspond to the first, thrid, and fifth levels in Maslow’s pyramid. As we said, the table of showbread represents our physical needs, the golden altar our relationships, and the ark represents our soul’s needs to self-fulfill (or self-actualize), which means to perform the mission for which our soul came into this world.

The laurels or crowns of each vessel represent the “surrounding light,” or the more spiritual or psychological conditions that make those needs to which the vessel corresponds, possible and attainable. What this reveals is that in Maslow’s hierarchy, each level has a “conditions” level about it; things that make the lower level sustainable and possible.

Thus, the crown of physiological needs is safety, which according to Maslow consists of personal security, employment, etc. These are like the crown of our physiological needs. The same holds true for the third level, the level of relationships (which here are described as “love and belonging”). The relationships level is “surrounded” or crowned by the fourth level, which are psychological conditions for having good relationships. An individual that does not have self-esteem, a feeling of self-worth, cannot respect others and cannot develop positive relationships.

The fifth level, which consists of our need to fulfill ourselves and which we have described as the needs of the soul, does not have a crown in Maslow’s hierarchy. But, the ark, which corresponds to this level, does have a laurel. So our correspondence leads us to surmise that there is a “surrounding” level providing the conditions for self-fulfillment and the soul’s needs. This is an important addition to Maslow’s theory. In a moment we will see how Chassidic thought helps us define what this crown of the soul’s needs contains.

In addition, we saw that there is a general crown that surrounds all three vessels and their laurels, the so-called crown of good name. This level too is not visible in Maslow’s model and once again, Chassidut helps us define what this level is about. To understand how to define these two missing levels, let us first of all draw the full correspondence.

There is a lot to be developed based on this full correspondence, but this complete correspondence highlights that the two levels above Maslow’s highest part of the hierarchy needs are Pleasure and Faith. Pleasure is the condition needed for self-fulfillment. In Chassidic thought this pleasure is considered to be the soul of the will to pursue one’s purpose in life. The highest level, faith is like the soul of the entire structure, the condition that allows all of our needs to be met in life.

Q: There is a statement

Q: With the coronavirus going